Fundamentalists and Other White Evangelicals Who Support Roy Moore

Bible-thumping culture-warrior and disgraced former judge Roy Moore, who is the Republican nominee for a U.S. Senate seat from Alabama, is still enthusiastically campaigning for next month’s special election, despite multiple allegations that he has a history of molesting and sexually assaulting children.

With so many disturbing criminal accusations swirling around him, there are some places Moore can’t go to campaign. Like the mall and the YMCA in Gadsden, Alabama, both of which reportedly refuse to welcome him due to his reputation for creeping on teenage girls. But for a guy like Roy Moore, there’s one place he’s sure to find a warmly receptive audience: fundamentalist white churches. That’s why Moore spent Tuesday night basking in the “Amens” from supporters gathered at Walker Springs Road Baptist Church in Jackson, Alabama.

This was a campaign rally, but it was also a special addition to the church’s week-long “revival” conference titled “God Save America” — a title that Moore borrowed for his own speech/sermon last night. Voting for Roy Moore is, for this church, a Christian duty and part of God’s Plan for America. These folks see the media firestorm surrounding Moore as an act of God — a divine miracle that takes the lying accusations of evil liberals and turns them to God’s higher purpose of drawing more attention to Moore’s holy patriotic message:

Rev. David Webb, pastor of the church consisting of about 200 members, said the amount of national media attention accompanying Moore’s visit was the result of “God’s purpose.”

“Why wouldn’t they?” he said, adding that the allegations about child sex abuse against Moore are “just allegations.”

Moore knows how to talk to this white fundamentalist crowd, and he pitched his sermon to cater to one of their favorite fantasies — the idea that they are all courageous martyrs being persecuted for whiteousness’ sake:

“Why do you think they are giving me this trouble?” Moore said. “Why am I being harassed by the media (who are) pushing these allegations in the last 30 days of this campaign? After 40-something years of fighting this battle, I’m now facing allegations. That’s all the press wants to talk about. But I want to talk about the issues and where this country is going and if we don’t come back to God, we’re not going anywhere.”

Moore didn’t bring up any specific political issues during the speech, such as health care or tax reform. But he did encourage the attendees, including members of the youth choir, to “take a stand” in defense of their Christian principles as they pursue professional careers in government, medicine or in their marriages.

John Sharp’s excellent report goes on to discuss Moore’s continuing support from his base of white Christian Republicans:

Evangelical conservative voters are expected to be Moore’s biggest supporters on Dec. 12. A Decision Desk HQ poll, taken last weekend after The Washington Post report first surfaced, showed the former judge in a tie with Jones. But among voters describing themselves as evangelical, Moore held at least a 20-percentage-point advantage.

Still, the website for Walker Spring Road Baptist Church is a handy guide to some of the qualities that distinguish the fundamentalist sub-set of white evangelicalism: They are a (capital-I) Independent Baptist Church. They’ve got their own private (post-Brown) Christian academy, complete with classic fundie architecture. They’re KJV-only, and their (surprisingly short) “What We Believe” statement includes a section on “The Last Days” — one written to reassure doubters that they’re staunchly opposed to any of that nonsense peddled by mid-Trib heretics:

Those are all hallmarks of [late-20th century white American] Christian fundamentalism. But apart from the KJV-only stuff, much of this can also be found in “mainstream” white evangelical churches and institutions that would take offense at being described as fundamentalist. Just take a look at some of the “inerrantist” and creationist stuff being presented this week at the Evangelical Theological Society.

The main reason, though, that it’s harder nowadays to distinguish between fundamentalists and run-of-the-mill white evangelicals has to do with the warm reception that Roy Moore received last night at that fundamentalist Baptist church. His message of white Christian nationalism, the heroism of the persecuted hegemon, and the dangers of the liberal elites besieging the faithful on all sides is just as popular and just as common in evangelical gatherings as in fundie settings. For both flavors of evangelical, “God Save America” means revival — and that means ensuring a Republican majority in the Senate to confirm “conservative” judges who will restore Gilded Age jurisprudence and roll back the narrative of decline that began, in a phrase from Moore’s sermon/speech, when “they started to create new rights in 1965.” 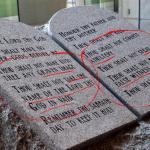