Bad Jackie and the Permian Pompeii

This is a typically impressive and impressively typical post from Joel Duff at Naturalis Historia. Duff is a biologist who blogs with infinite patience and thoroughness on “the intersection of science and faith” — meaning, most of the time, on the utterly indefensible, reality-denying falsehoods of young-Earth creationism. He specializes in posts like this one — about the fossil record of a remarkable Permian forest in China, preserved in volcanic ash between ancient seams of coal. It’s a classic example of the very common kind of thing that the fabulists and frauds at places like the “Institute for Creation Research” are incapable of explaining, and Duff writes with devastating detail about why their hand-waving claims of “flood geology” just won’t do here. 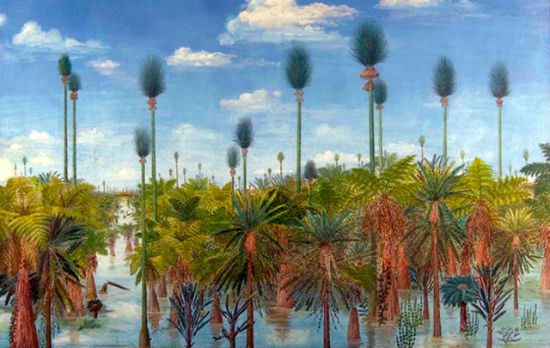 The evidence is clear and undeniable. But Duff has been at this long enough to realize that, for young-Earth creationists, the evidence has never really mattered much. At the end of his long, point-by-point refutation of one professional creationist’s attempts to claim this evidence isn’t a problem for the folklore he’s peddling, Duff writes this:

His mission is clearly a failure if providing a legitimate alternative interpretation was the goal. However, his mission could be deemed a success if it simply was to provide enough misdirection and seemingly plausible alternative hypotheses to set the minds of those committed to young earth creationism as ease so they do not to pursue the meaning of these fossils any further.

This is the function of much of the bad-faith dishonesty promoted by hucksters of all kinds. The individual lies don’t have to stand on their own. They just need to be plausible-seeming enough to allow the listeners to continue pretending that their minds are at ease. The distinct deceptions of any one particular lie are less important than the way they reinforce the larger web of deception — reassuring listeners to continue participating in them and not to bother pursuing any of the nagging questions they may have.

Because they do have nagging questions — little flickering glimpses of doubt at the corner of their eye. Their minds constantly have to be put at ease because their minds are not at ease. The steady stream of babbling malarkey that Duff politely describes as “misdirection and seemingly plausible alternative hypotheses” is a kind of lullaby. “There, there, you don’t need to worry about that. Everything is fine. Go back to sleep.”

This works. Until it doesn’t. The lies and bad-faith arguments presented to reassure listeners not to examine their doubts about the earlier lies and bad-faith arguments might soothe those earlier qualms, but they raise new ones. Now there’s something flitting about out of the other corner of the eye. Now there’s another direction in which they have to remind themselves not to look too closely.

At every step, throughout every repetition of this cycle, the audience for such lies has to agree to participate in them. But each new step and each new layer of lies makes this more difficult, even for those who are eager and wholly willing to play along. It gets more and more difficult for them to keep track of all the things they can’t allow themselves to see or to hear. Eventually, at some point — even for those trying their hardest to play along, even if only by accident — they’ll wind up looking at something the web of lies cannot withstand seeing.

What happens then is up to them, but they’ll have a decision to make, and it will be one they cannot help but be fully aware of making.