Russian Infiltration of ‘Various Religious Groups’ — ‘There Has Been a Lot of That’ January 23, 2018 Fred Clark

Glenn Simpson is the founder of the political research group Fusion GPS. They do “opposition research,” digging up dirt on opposing candidates or vetting potential hires or nominees. Rummaging through closets in search of skeletons is pretty much their business model. During the 2016 elections, Fusion GPS spent a lot of time investigating Donald Trump in general, and his many ties to Russia in particular. This was a nonpartisan project — they were hired first by some of Trump’s Republican primary opponents and then, after those folks dropped out, they continued that work for his general election opponents.

Simpson testified before the House Permanent Select Committee on Intelligence in November — twice, for many hours each time. This testimony was not classified, but since it was unflattering to Trump, the Republican members of the committee did not want it seen by their constituents. So it wasn’t made public until very recently, after Simpson wrote a New York Times op-ed urging Congress to let the public hear what he had to say. He is standing by his words.

This bit from his testimony has gotten quite a bit of attention from journalists:

It appears the Russians, you know, infiltrated the NRA And there is more than one explanation for why. But I would say broadly speaking, it appears that the Russian operation was designed to infiltrate conservative organizations. And they targeted various conservative organizations, religious and otherwise, and they seem to have made a very concerted effort to get in with the NRA. .

That has prompted a lot of good reporting on the possibility that Russian money and Russian messaging was being laundered through the powerful gun-sellers lobby, the National Rifle Association. Most of that reporting focuses on the specific, shady figures Simpson discussed in his testimony:

And so there is a Russian banker-slash-Duma member-slash-Mafia leader named Alexander Torshin who is a life member of the NRA. And we spent a lot of time investigating Mr. Torshin. And he is well known to Spanish law enforcement for money laundering activity, and you have probably seen the press articles. And I think the Spanish files on him should be available to you. And he, as you know, was supposed to have a meeting with President Trump after the inauguration. And somebody noticed that there had been some stories about him that weren’t pretty good.

So he is one of the more important figures, but, you know, another woman with whom he was working, Maria Butina, also was a big Trump fan in Russia, and then suddenly showed up here and started hanging around the Trump transition after the election and rented an apartment and enrolled herself at AU, which I assume gets you a visa.

Simpson’s discussion of the NRA in the context of “conservative organizations, religious and otherwise” sparks the illuminating thought that it might be useful to think of the NRA functioning as a “religious” organization.

I’m also thinking back to my days as a TA and wondering what it must be like to be an adjunct at American University and to realize that one of the people in your class is basically Elizabeth Jennings from The Americans. 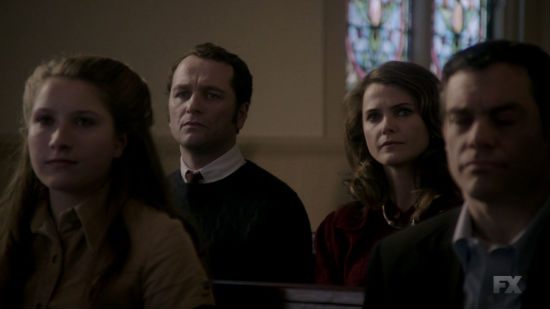 But set that aside for now. The tantalizing bit from Simpson’s testimony here that hasn’t prompted nearly as much follow-up reporting is his remark that “the Russian operation was designed to infiltrate conservative organizations” and that “religious” groups were specifically targeted for this infiltration.

Of course, “targeted” does not necessarily mean successfully targeted. But I don’t see a lot of religious right organizations displaying either the intellectual or the moral capacity to resist such targeting.

Special counsel Robert Mueller runs a famously tight ship, ensuring that there are no leaks in his ongoing investigation, so if the leaders of some religious right group had, responsibly, contacted the FBI, reporting that they had been subjected to overtures from “Russians … pursuing relationships” in service of Putin’s political aims, then we likely won’t hear about it until Mueller’s ultimate findings are made public. But I have a hard time imagining that this is how any of those groups would have reacted. Their response to Russian overtures, I imagine, would likelier have been as enthusiastically incriminating as the sort of thing we’ve seen from Carter Page and Don Jr.

We need to know the names of those “various religious groups” that were “targeted” and — perhaps — “infiltrated” by Russians representing “banker-slash-Duma member-slash-Mafia” interests. And we need to know how this influenced them.

We could frame this in high-minded terms, arguing that Simpson’s vague assertions unfairly cast a shadow of doubt upon all conservative “religious groups,” and insisting that we require a list of tainted and compromised organizations so that all of the legitimate, untainted, un-infiltrated religious right organizations may be publicly exonerated. That’s also true.

But mainly I just want to see the names. Who was targeted? Who took the bait? And what were the consequences of that?

The trap of being an A+ Christian (and...
Growing up a well-trained evangelical, I knew my Bible. I knew Luther's...
view all Progressive Christian blogs
What Are Your Thoughts?leave a comment
Copyright 2008-2021, Patheos. All rights reserved.