The truth will only kill us both

• Joshua Hammerman, “As a rabbi, I will violate the Sabbath to help save lives from gun violence.”

I’ll be joining local teens on the March for Our Lives on Saturday (March 24), and by traveling, I will violate the Jewish Sabbath to get there. But in doing so, I’ll be fulfilling the greatest of Jewish religious duties — one that supersedes even the Sabbath itself. …

The Talmudic sages taught that one who is vigilant in saving a life on Shabbat is praiseworthy. The Talmud presents several scenarios involving permissible Sabbath violations, including rescuing a child from a pit or saving someone drowning in the sea. The rabbis applied the principles of Pikuach Nefesh both to saving the lives of Jews and gentiles and made it clear that the risk of death did not need to be certain or immediate.

As one first-century rabbi put it: “The Sabbath was made for humankind, and not humankind for the Sabbath.”

• I like Alissa Wilkinson, the former Christianity Today film critic who now writes for Vox. And I appreciate the linguistic difficulty involved in this piece on “What this weekend’s big box office surprise tells us about the faith-based movie audience.” But she doesn’t manage to escape the trap created by self-described “Christian” movies and “Christian” music.

The story here is that a white-evangelical branded movie — I Can Only Imagine — had a good opening weekend, making $17 million at the box office. Wilkinson notes that this “faith-based” movie out-sold A Wrinkle in Time over the weekend. But wait — Wrinkle is a movie adaptation of a Madeleine L’Engle book. That was a book beloved by white evangelical readers — one of the few books white evangelical kids are allowed and encouraged to read. If a Madeleine L’-freaking-Engle adaptation isn’t “faith-based” then what does that term even mean?

Well, it means the same thing that “Christian” means here, as Wilkinson describes the CCM-mega-hit by the CCM band Mercy Me on which the new “faith-based” movie is, um, based: “The single went double platinum — the only Christian song, at present, to have reached that distinction — and it’s the best-selling Christian single of all time.”

That’s true only if you [re-]define the adjective “Christian” there the way the “Christian music industry” defines it — as referring to a white-evangelical branded act’s recording of a song on a white-evangelical branded record label. I mean, we don’t even need to get into the Staple Singers, or U2 — “You Light Up My Life” sold 4 million copies for Debby Boone (and that was back when quadruple platinum still meant actual 45s).

I don’t fault Wilkinson for employing the industry-preferred language of “faith-based” and “Christian,” but this has ugly side effects. Allowing a bunch of white evangelical capitalists to “rebrand” the word “Christian” as a consumer market niche has, over the past several decades, resulted in Christianity itself getting rebranded in much the same way. That’s not good.

You should be fascinated by Appalachia, but not because it was forgotten. It has been working this whole time. There is no one story of Appalachia — and there is no single song, but many. And they’re not elegies. They’re marches.

Duff — a biology professor — shares some of this divine delight in ostriches, and spends his first post mostly just enjoying “God’s Commentary on Creation” in those verses. The second part — “Consider the Ostrich: Comparing Theistic Models of Biological Origins” — does what Duff does best, taking the claims of various forms of creationism far more seriously than the creationists themselves are capable of doing. As usual, it’s pretty devastating.

Duff’s footnote on the authorship of Job disappoints a bit, suggesting the book is either based in history or not “inspired.” (That’s not how that works.) And, like most people discussing Job, he doesn’t mention the extreme minority view that I stubbornly insist is correct: Job is not a poem; Job is a play. It was written for the stage.

• The title for this post comes from the lyrics to the song “DJT” by former Danity Kane member Aubrey O’Day. I blame 81 percent of white evangelicals for forcing me to understand that sentence.

(Fear/suspicion: Somewhere in Nashvegas, a “Christian music” executive is pondering a CCM makeover and comeback for O’Day. It’d be like a reverse Katie Hudson! The timing is perfect!) 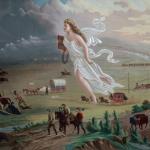 March 19, 2018
And wisdom to know the difference
Next Post