RIP Art Bell. I like this remembrance from William Hughes at The AV Club:

Bell’s genius as a radio host can be boiled down to a few key points: He (almost) never screened callers, and he never shut anybody down. Instead, Bell’s M.O. was to listen, asking questions and pushing back on certain points, but allowing his guests to lay out the vast, personal labyrinths of mythology that existed in their heads. …

Bell understood that there was good radio in letting these elaborate ideas play out; like a great improviser, he could yes-and almost anything, whether his guest was talking about “shadow people,” secret Navy experimentation, or a whole host of alien-related ideas.

Bell was almost always respectful and kind to his callers. He let them tell their stories or describe their theories without judgment, making him perhaps the only person in their lives who allowed them to feel truly heard and truly known. The impression one got listening to Coast To Coast was not that Bell was a crackpot (even if he probably was), but that he was someone who was very good with and good toward crackpots.* There was something pastoral about that. Bell, in a sense, was comforting the afflicted. He was a late-night chaplain to America’s crackpots, offering something almost like confession and absolution.

I haven’t heard as much of Coast To Coast since George Noory took over, but my sense is the show seems to go astray a bit more now as some of its various mythologies have ossified into rules and boundaries. Maybe it’s because too many of the “experts” invited as guests have gotten too sophisticated at monetizing their message. 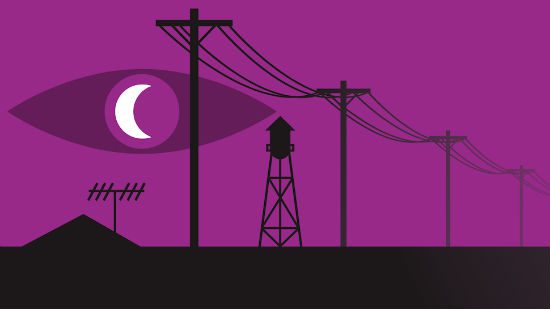 Or maybe it’s just that I’ve tuned in to hear Noory, deliberately — with a digital radio. Some of the old magic, I think, involved the weird serendipity of turning an actual dial to half-receive these odd broadcasts in the middle of the night as you traversed the nowhere on a dark highway somewhere between leaving and arriving. That’s what the creators of Welcome to Nightvale understand, effectively mining the eerie delight of stumbling across something that sounds perfectly normal at first, then careens away from it to who knows where. The late-night AM dial was like that 20 years ago, a roulette wheel that might give you the local news from 400 miles away, or raucous salsa music, or some radio preacher describing the beasts of Daniel and Revelation. Or it might give you Art Bell gently allowing some caller on the wild-card line to tell the implausible story they were too afraid to share with their own family.

Part of the delight of Coast To Coast was also the Fortean reminder that the universe is always stranger than we expect. The stories and theories shared by his callers might be unreal, but those callers themselves are real, and really our neighbors. And while there’s no such thing as “Mel’s Hole” in rural Washington State, if you click over to the Wikipedia page for it, it will helpfully lead you to the page for Devil’s Hole in Nevada — an even more wonderfully strange story that’s also actually true.

I suppose Art Bell also deserves a share of the blame for the sorry state of American epistemology. He was the king of “alternative facts” and fake news long before those became infamous buzzwords. But Bell rarely seemed to have weaponized them or monetized them. Coast To Coast may have been a cornucopia of bad science, but not of bad faith.

Consider that while Art Bell ruled the AM dial in the middle of the night, it belonged to Rush Limbaugh during the middle of the day. Limbaugh and his many imitators made their fortune bearing false witness against their neighbors. Bell’s witness, and that of his callers, may have been unreliable, but it wasn’t being borne against anybody. That matters.

It matters ethically, I think, but it also matters artistically. Because Bell wasn’t interested in weaponizing conspiracy theories, they were allowed to roam free and might wind up anywhere — aliens, ghosts, astral projection, Nbiru, Chthulhu, bigfoot. That kept things surprising and interesting, potentially clever or delightful. Once anyone seeks to weaponize conspiracy theories in service of an agenda it forces them, inevitably, to arrive at the same place they all eventually arrive: Satanic baby-killers. That’s never clever or surprising or interesting. It’s dull and stale and the opposite of creative or delightful.

Granted, this aesthetic consideration is far, far less important than the ethical concern. The disease of “Satanic baby-killers” is a prideful, corrosive rot that rationalizes violence against the Other. If unchecked, it is the process that will — as Lewis said — “make us into devils … fixed forever in a universe of pure hatred.” That form of weaponized conspiracy thinking leads, ultimately, to support for or acceptance of genocide, and that is immeasurably more important than any aesthetic complaints about it also being stupefyingly dull and dumb.

This distinction — good faith crackpottery vs. weaponized bad faith conspiracy theories — helps to clarify why we’re able to think fondly of Art Bell in a way that no one will ever think fondly of, say, 8chan. The latter is relentlessly malicious. Bell wasn’t. He famously did not screen his callers before allowing them on the air and was genially receptive to almost any point of view that any of them might feel the need to express, but his forum wasn’t receptive to malice and so the malicious weren’t rushing to seek it out.

That accounts, I think, for the most remarkable fact about Bell’s long history as a platform for conspiracy theories and alternate views of reality: his show did not gallop off into racism and anti-Semitism. It wasn’t taken over by the propagandists of hate spewing their poisonous nonsense about international Jewish conspiracies (Soros!). I can’t claim anything like a comprehensive, encyclopedic knowledge of Bell’s history on Coast To Coast, but from the many hours I heard of it, the anti-Semites and witch-sniffers who almost always wind up taking over any forum for conspiracy thinking seemed unable to gain a toehold in Bell’s world.

That’s impressive. We can’t say the same thing of, for example, Pat Robertson, or of most of his colleagues in the white evangelical religious right.

* I think of “crackpot” as a precise term of art. One of my favorite discussions of crackpottery is from Maggie Koerth-Baker, “Crackpots, geniuses, and how to tell the difference.” After considering the parallels between a crackpot “gas giant Earth” theorist and various creationists, she offers several wise rules for discernment. Here are Rules No. 3 and No. 5:

3) If believing the idea will make you smarter than the official experts, be suspicious. Experts aren’t always right. But they do know their fields and experience does matter. Chances are, you’re an expert in something. Say you knew how to bake pies really well. You’d be pretty suspicious if somebody who didn’t bake (or didn’t even really cook much) told you that you were making pies all wrong—and that they had a secret pie recipe that was better than yours. They might be right. It’s worth taking a look at their evidence. But it also worth being skeptical. …

5) If you’re told you can’t trust any other sources of information (especially because of Big Conspiracy, or because so-and-so expert is a bad person in other areas of his or her life), be cautious. Replication is a powerful tool. It helps us get past accidental and intentional biases to see something closer to the truth. Suppressing replication is also powerful, because it leaves you with no way to check against bias.

April 14, 2018
Crackpot Realism and The End of The World
Next Post

April 15, 2018 Sunday favorites
Recent Comments
0 | Leave a Comment
"Must be a nightmare for those poor kids who have to walk to school barefoot ..."
reynard61 Much obliged
"Feels it worth pointing out as well that after the absolute disaster that caused in ..."
Lsamaknight Much obliged
"Your mom might appreciate this one then:"How come I can call my light jacket a ..."
reynard61 Much obliged
"What if he kept the mask on? (I'm sure Felicia would approve)"
Lsamaknight Much obliged
Browse Our Archives
get the latest from
slacktivist
Sign up for our newsletter
POPULAR AT PATHEOS Progressive Christian
1