The ‘Weird’ Fringe is the Biggest Part of White Evangelicalism

The ‘Weird’ Fringe is the Biggest Part of White Evangelicalism April 23, 2018 Fred Clark

Graham’s “Church of The Donald” is in Politico, but she’s not a typical cult-of-savvy Politico writer. She’s a veteran religion reporter, and a good one — someone with a deep, longstanding knowledge of white evangelicalism and the various corners of its subculture. This piece is, on one level, just a work of basic reporting, a kind of guided tour of that world for Politico readers who might not be acquainted with it.

But I think this piece might be more eye-opening for white evangelical readers — for people who are already familiar with that world — because what Ruth Graham highlights here is the way that a lot of conventional thinking about evangelicalism gets it backwards. That conventional thinking may once have been true, but it no longer is — and hasn’t been for some time. 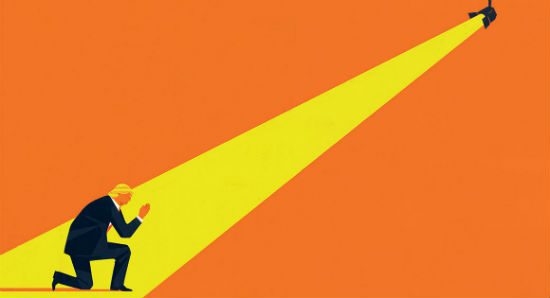 Yes, the subculture also included lots of other, smaller, less important branches — televangelists, prosperity preachers, faith-healers, snake-handlers, “Bible-prophecy scholars,” Reconstructionist neo-Confederates, spiritual warfare obsessives, Ken Ham, Bob Jones, Pat freaking Robertson, etc. But those smaller fringe aspects of evangelicalism were not typical of the movement as a whole. Mainstream evangelicals might begrudgingly acknowledge that they were a part of the extended family, rolling their eyes at news of the latest embarrassment from The 700 Club, but they always insisted that those distant relatives were less consequential than the mainstream.

After all, as the great scholar of American evangelicalism George Marsden put it, an evangelical is “someone who likes Billy Graham” — not someone who likes Pat Robertson. Robertson may have his little cable TV show, but he rarely makes the pages of Christianity Today. His books aren’t assigned in classes at Wheaton or Calvin, or at Fuller or TEDS. He’s not regarded as influential or revered by any of the important evangelical institutions like InterVarsity or the National Association of Evangelicals. He’s part of the fringe.

But what Graham’s “Church of The Donald” illustrates is that this supposed “fringe” is vastly larger and far, far more influential than any of those supposedly mainstream institutions or their leaders. CBN is bigger, more central, and more typically representative of American white evangelicalism than CT or Wheaton or the NAE.

It’s really the old-guard “mainstream” that is now the fringe — the marginal, inconsequential, only begrudgingly accepted faction of the larger family whose presence in it is a source of embarrassment for the rest. That mainstream still thinks of itself as the bastion of the most influential and most authoritative evangelical “leadership,” but those leaders lack what the leading voices of the weird fringes have: actual followers.

This fact has largely escaped notice by the leaders of “mainstream” evangelicalism — the folks I’ve sometimes called the “faculty lounge.” The shrinking, diminishing role of their leadership might be described as the shift from them representing all Americans who “like Billy Graham” to their representing, primarily, those Americans who like George Marsden.*

Robert Jones of the Public Religion Research Institute understands that the center of gravity has shifted away from the old-guard “mainstream” to what was once dismissed as the “fringe,” but he hasn’t yet lost the habits of the old reality. Listen to how he describes the new evangelical leadership in Graham’s piece:

Trump has actually delivered the goods in Washington, especially for this particular strain of evangelicals. And he has brought more televangelists and Christian broadcasters into his inner circle than any president before him. [Paula] White, arguably his closest spiritual adviser, hosted a show that aired on TBN and BET for years. His lawyer, Jay Sekulow, has his own daily call-in radio show on a Christian network. Trump’s faith advisory board, announced during the campaign, included many members drawn from the world of television ministry, including Ken and Gloria Copeland, who have headed a daily program since 1989; Tony Suarez, who hosts a talk show on TBN’s Hispanic-oriented network; Jentezen Franklin and Robert Jeffress, whose sermons air as their own programs on TBN; and Mark Burns, who founded the web-based NOW Network. Johnnie Moore, another advisory board member, is a communications consultant who has worked with clients including CBN. “If you look at his evangelical advisory council, it’s people with media connections, more than broad church-based connections,” Robert Jones, CEO of the Public Religion Research Institute, says. “That’s a weird slice of the evangelical world.”

“Weird” is probably an inescapable word when considering people like the Copelands, but if it’s meant to describe them as an atypical aberration, then it’s also a misleading word here. These “people with media connections” rather than “broad church-based connections” are not merely a “slice of the evangelical world.” They are that world. They are the majority of it.

It’s the former “mainstream” that is now weird, that now consists only of a non-representative “slice.”

The evaporating tributary of the former mainstream sent representatives of its no-longer representative brand of evangelicalism to a big “consultation” last week at — where else? — Wheaton College. It was a gathering of people who like George Marsden. It was a vanguard without an army, a gathering of leaders without followers.

* For the record: I like George Marsden. Quite a bit. He is an irreplaceable, essential interpreter of 20th-century white evangelicalism. I think that admiring George Marsden is admirable. I also recognize that most white evangelicals have never heard of him and that, outside of the walls of the faculty lounge, Pat Robertson matters far, far more than he does. Heck, John Hagee matters far more than he does.

I also like and admire Mark Noll — another terrific scholar of American evangelicalism who inevitably gets mentioned in the next breath after any mention of Marsden. I think Noll’s The Scandal of the Evangelical Mind is one of the most perceptive descriptions of white evangelicalism ever produced. That was a book that “everybody” in mainstream evangelicalism read when it came out 20+ years ago, becoming a runaway best-seller for the respected mainstream evangelical publisher Wm. B. Eerdmans. It sold nearly 35,000 copies.

Contrast that with, for example, the World’s Worst Books, which have sold more than 65 million copies so far.

April 24, 2018 'A kind of resentful nostalgia'
Recent Comments
0 | Leave a Comment
Browse Our Archives
get the latest from
slacktivist
Sign up for our newsletter
POPULAR AT PATHEOS Progressive Christian
1