Read your Bible and drink your coffee

The American Bible Society is not making a fan out of this Bible-loving Christian by framing their latest promotional survey in terms of the Bible vs. Coffee:

The more engaged someone is with the Bible, the more likely he or she is to recognize their need for it on a daily basis, according to the latest State of the Bible research from American Bible Society. Among this group, 61 percent said they must have the Bible as part of their daily routines when given a choice between the Bible, coffee, sweets and social media.

OK, yes, these are deliberately silly questions. ABS’ survey is more about marketing than measuring. Dumbish questions like this are just meant to grab attention in service of promoting their campaign for daily Bible reading.

Fair enough, I suppose. But I think these attention-grabbing silly questions are also damaging, and that they reflect a harmful, shallow, and ultimately off-putting approach to the Bible itself.

First off, though, let’s just deal with the silliness itself. The Bible vs. coffee is a false binary and one that doesn’t do any favors for the Society’s aim of encouraging people to read the Bible every day. I read the Bible a lot — quite often while also drinking coffee. These things are not in competition and pretending they are is bound to make at least some people choose what the ABS would consider the wrong one. After all, nobody is going to get a withdrawal headache at lunchtime if they skip their morning Bible reading. 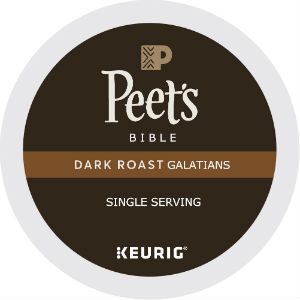 More importantly, the comparison reveals a kind of shallow utility in the kind of daily Bible reading ABS is advocating here. It seems to promote the Bible as a kind of drug — a mild stimulant or mommy’s little helper to get you going to face the day. That’s not what books are for in general, nor what this particular book is for in particular.

ABS’ phrase about Bible-readers’ “need for it on a daily basis” just seems weirder and more disturbing the more one thinks about it. This is not what books are for. It’s not what books do — not what we do with them or what they do for us. Think of any other book you love. You read it. You re-read it. You keep it nearby, and sometimes read in it.

But you don’t carve it up into isolated little bite-sized chunks for daily ingestion. You don’t think of the ingestion of such discrete portions as a “need” — as something you use to help you jump-start your day.

Approaching a book in that way changes the book and the meaning of the book for the reader — or rather, in this case, for the user. It makes the text a tool, a stimulant, a pick-me-up, a Starbuck’s run.

I’m not convinced that you can use the Bible in this way, “on a daily basis,” without reducing it to the thing thus used. The use becomes the function and the function defines the tool. Treat the Bible as a daily dose of Adderall and that is what it will be. Treat it as your daily Horoscope and that it what it will become for you.

Again, it’s a book. An anthology of short books, but still, a book. Books are for reading. I appreciate that for devout Christian believers, this is a very special book, unlike any other, and thus it makes sense to regard it differently from all other books. But that difference should mean it’s more of a book, not less of one.

I don’t generally pay a lot of attention to surveys like this one because they’re notoriously untrustworthy. That’s not a knock on the American Bible Society, but simply a fact of any self-reported survey involving something that respondents are likely to regard as something that, ideally, they ought to be doing. No such survey accurately measures what people are actually doing or thinking, but rather what it is they think they ought to say. It tells you what people want you to think their answer would be.

Surveys attempting to measure religious practice are infamous for this. You can’t expect to get reliable church-attendance figures by asking people how often they go. Nor is a survey of much use for measuring how often people pray, or whether they tithe, etc. But this is not exclusively a problem with religious questions. A survey asking people how often they go to the gym, or how many days a week they exercise will run into the same problem. So will surveys asking about how many hours of television people watch (which will provide an unreliable under-estimate).

Responses to such surveys tell us something, just not what they purport to tell us on the surface. A question about how often people exercise won’t tell us much about what people are actually doing, but it will give us a sense of how much exercise people feel they ought to be doing. Or, perhaps, how much exercise they think others expect them to be doing. As a measure of activity, the survey is useless, but it provides a differently useful measure of the general perception of how much of that activity is regarded as minimally respectable.

The ABS, to their credit, acknowledges that, and even attempts to measure that vague perception more precisely with its framework of “Bible engagement.” Alas, the form of such “engagement” that they measure — and thus that they promote — as greatest seems to be that oddly reductive, Bible-as-daily-dose-of-Adderall approach discussed above.

I suppose the Bible vs. coffee question was also, on some level, an attempt to sneak around this respectability effect to try to gauge what respondents are really doing as opposed to just what they think they ought to tell people they’re doing. As someone who loves both his Bible and his coffee, I wish they’d picked a different example.