Todd VanDerWerff has a nice Vox piece on “The real-life horrors behind the ending of Hereditary.” I’ve not seen that yet — I might not, because horror movie, but then again I might because Toni Collette. In any case, if you plan to watch that film and are trying to avoid spoilers, don’t click through to the whole essay which — as the headline warns — is about the ending, and therefore is full of “major spoilers.”

We can avoid such spoilers, though, in the part of VanDerWerff’s discussion I particularly liked, where he gets into the “feedback loop” at work between horror movies and culture:

What was vaguely remarkable about the Satanic Panic was how it felt as if it had arrived in our reality straight from a horror movie. When you look at some of the “true accounts” of devil cults on the evangelical Christian circuit in the ’80s, many of them sound less like anything that could really happen and much more like the third acts of movies like Rosemary’s Baby, The Exorcist, and The Omen.

Much like the way reports of alien sightings in the wake of Close Encounters of the Third Kind became more likely to depict gray-skinned beings with big black eyes, the devil-worshipper movies of the ’60s and ’70s solidified within the American subconscious a very specific idea of what was going on behind closed doors in seemingly harmless suburbia. (Surprise: It involved bathing in goat’s blood and trying to get demons to possess children.)

The same feedback loop perpetually shapes and reshapes popular Christian theology. Hal Lindsey’s early-1970s End-Times books helped to shape The Omen and to make it a big hit in 1976. Then The Omen, in turn, influenced the way subsequent “Bible prophecy” books portrayed their idea of “The Antichrist.” This Omen-influenced Rapture theology in turn inspired later works of pop-culture that would further reshape the theological imagination of Rapture Christians.

Right now, at “Bible-prophecy seminars” across America, earnest Rapture preachers are giving sermons about the End Times with details derived from and interpreted through the lens of the 2013 comedy This Is the End. And that’s true even though almost none of those pious preachers ever saw the profane, R-rated Seth Rogen/James Franco film.

This same feedback loop, by the way, is also where most of the so-called “doctrine of Hell” comes from. (That’s what it means to describe that tenet as “traditional,” even if those using the term don’t appreciate that the multiple traditions in question there include sub-apocryphal texts, legends, ballads, paintings and, eventually, literature, movies, Chick tracts, and comic books.)

The impossible to sort, Moebius-like dynamic of this feedback loop is why, as VanDerWerff acknowledges, it’s not quite sufficient to describe the Satanic Panic of the ’80s and ’90s as an underlying influence on contemporary movies like Hereditary. Because it’s a “loop,” and not a linear progression, tracing a piece of pop-culture storytelling back to an eruption of moral panic involves looping back around to trace how that moral panic draws on earlier stories, etc., etc. The Satanic Panic, he writes:

… was ridiculous on its face, but it had deep, deep roots in the US, stretching all the way back to the Salem witch trials, and we’ve never quite been able to shake variations on it. What is the Pizzagate conspiracy theory, if not the Satanic Panic dressed up in 2010s clothing?

Yes. And that current example — Pizzagate and QAnon’s Storm and all that business — illustrates why I think VanDerWerff misses the target a bit when he identifies the “real-life horrors” undergirding all this as “a millennia-old belief in a dark being constantly trying to turn humanity against its better natures.” He’s suggesting that the Satanic Panic (and the movies it has inspired) stems from the fears arising from belief in the devil. But we shouldn’t stop there. What fears gave rise to that belief?

That fear is something like the question posed in a classic Mitchell and Webb sketch: “Are we the baddies?” It’s the fear, the ever-present suspicion, that we’re not good.

We’re not afraid that there might be monsters out there in the dark, we’re afraid that there might not be. We need those monsters. We want them to be there because without them, without their superlative, extravagant, ridiculous-on-its-face evil to contrast ourselves favorably against, we would be forced to reckon with ourselves as we are. As long as there are Satanic baby-killers, we can think of ourselves as relatively good. 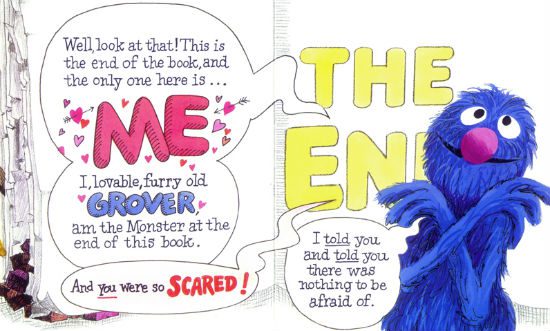 That helps to explain why information or education or factual correction doesn’t work as a response to panics or purges or piety driven by imaginary Satanic baby-killers. That only tends to make people even angrier. Nothing is more distressing to them than evidence that there is not a secretive cabal of Satan-worshipping cannibalistic pedophiles operating out of the neighborhood Starbucks, and that distress tends to make them recalcitrant, doubling-down on the belief and the meaning and identity they want it to provide for them.

I think these folks cannot be receptive to reality until they’re persuaded that reality might somehow, someday allow them to think of themselves as good. That, in turn, requires convincing them to reconceive of goodness as a pursuit rather than as an identity — to start understanding goodness as something they might do instead of something they can possess, to start thinking in terms of better than I was before rather than in terms of better than those people over there.

As I typed that, a little squiggly red line appeared under the word reconceive, indicating that spellcheck did not recognize the word. So allow me to rephrase that in simpler terms: They must be born again.