Love is a burning thing …

• “I have read the Bible. And it’s because I’ve read it that I have the faith that I do, that I believe what I do, and that I reject your theology so thoroughly.”

… Clergy have a part to play, says Mubin Shaikh, especially in evangelical Christian communities; they could be more aware and proactive in reaching out to people in their community whom they feel are slipping away. After all, this is exactly what’s been asked of Muslim-American communities since 2001.

Clergy do, indeed, have a part to play, “especially in [white] evangelical Christian communities.” Neither those clergy nor their institutional and (non-)denominational structures are prepared or equipped to play that part. Those few that are will likely find themselves designated as ex-clergy and ex-evangelicals.

• I’m only a little more than half-way through the first season, but so far I’m enjoying the new Cloak & Dagger TV series, which is broadcast on the horribly named FreeForm network. (That network — formerly Fox Family, formerly ABC Family, and before that CBN Family — started out as Pat Robertson’s Christian Broadcasting Network. And is “broadcast” still the right word?)

Marvel’s live-action TV shows do best when they feature a quality villain, and Cloak and Dagger is focused on one of my favorites from the comics: The Roxxon Corporation. That seems timely.

Cloak and Dagger departs from the original comic in several, mostly smart ways. And it departs from most live-action comic adaptations by taking its time exploring and explaining the strange super-powers developed by its protagonists. 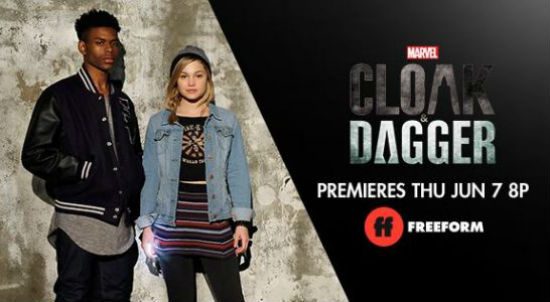 The two fundamental human drivers when it comes to taking information onboard effectively are hopes and fears and many of those are unspoken and even unconscious. You didn’t know that was a fear until you saw something that just evoked that reaction from you. And our job is to get, is to drop the bucket further down the well than anybody else, to understand what are those really deep-seated underlying fears, concerns.

It’s no good fighting an election campaign on the facts because actually it’s all about emotion.

But Cambridge Analytica doesn’t actually have super powers. They like to pretend they’re like “Cloak” — able to plumb the subconscious depths of unwitting mortals to expose and exploit their deepest, previously unidentified fears. But that’s all smoke and mirrors. All they did — for Trump’s campaign, and for the Brexit vote — was what Cory Doctorow described: “Cambridge Analytica uses Facebook to find racist jerks and tell them to vote for Trump and then they claim that they’ve discovered a mystical way to get otherwise sensible people to vote for maniacs.”

“Fear,” like “economic anxiety,” is just an overly polite euphemism. For the same thing.

• If somebody despises some categories of potential customers so much that they perpetually get litigious about their right to refuse service, then there’s a really good chance that person also spits in their food. We’re talking big, hocking loogies. I mean, what are the odds that somebody who is that contemptuous in big ways doesn’t also channel that same contempt in a thousand lesser, pettier ways?

And when that same person advertises their contempt toward an ever-expanding set of others he is hell-bent on othering, then there’s little grounds for confidence that you — or any customer at all — might be safe from worry that he’s spitting in your food as well.

Here’s a list of the best bakeries in and around Lakewood, Colorado. The top 4, and all the bakeries from No. 6 on down, are apparently not operated by sanctimonious, litigious jerks who can reasonably be suspected of spitting in the cakes of the few customers they haven’t decided to sue. It seems prudent to patronize any of those rather than the Masterpiece Cakeshop, at which there’s no guarantee — no reasonable expectation — that you won’t get sued or perhaps otherwise treated to a loogie-licious taste of Jack Phillips’ abundant disdain.

• Joseph P. Laycock has a colorful first-hand account of the Satanic Temple rally for religious liberty last week in Little Rock Arkansas, which we wrote about here yesterday.

• The title of this post comes, of course, from the great Johnny Cash song, but let’s all give a listen to this cover of it from Social Distortion because — as we were recently reminded — Social D rocks:

August 22, 2018 Postcards from the class & culture wars (8.22.18)
Recent Comments
0 | Leave a Comment
Browse Our Archives
get the latest from
slacktivist
Sign up for our newsletter
POPULAR AT PATHEOS Progressive Christian
1