God and Mammon: This isn’t a rule you have to obey, it’s just how it works

Even for Pat Robertson, this is appalling: “Prominent evangelical leader on Khashoggi crisis: let’s not risk ‘$100 billion worth of arms sales.’”

I mean, there were several other available ways for him to make this argument. They’d all be sleazy and immoral, but not quite this sleazy and immoral. He could have gone with the absurdly false-but-popular dodge — invoked today by Secretary of State Mike Pompeo, among others — that the Saudis are an important ally in the fight against terrorism. Or he could have gone all Kissinger-esque “realist” and just conceded that MBS is “a monster, but he’s our monster.”

That may be sickeningly accurate as a description of America’s role in the world. American-made cluster-bombs dropped by American-made fighter jets are slaughtering civilians in Yemen. The bomb the Saudis dropped on a school bus, killing 40 Yemeni children, was Made in America.™ And the Saudis have hired American mercenaries and death squads to target their sectarian enemies.

But Pat Robertson isn’t talking about this “$100 billion worth of arms sales” as a starkly ugly fact, as a critique of American blood-money and our shared complicity in this evil. He’s celebrating it as a Good Thing. He’s saying it’s what America ought to be doing.

Because that’s $100 billion-with-a-B. And for Pat Robertson, when $100 billion is the ends, that justifies any means — including the torture, murder, and dismemberment of a U.S. resident and Washington Post columnist. 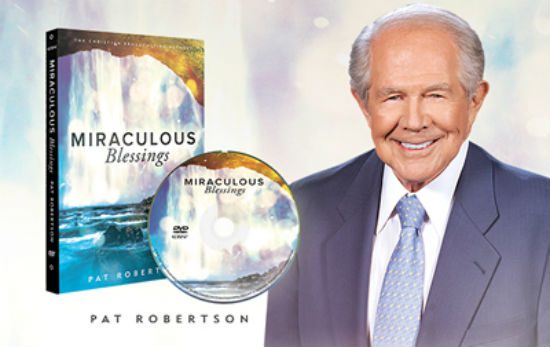 “You cannot serve God and Mammon,” Jesus said. “If you love the one, you will hate the other.” That’s from the Sermon on the Mount — a long passage that’s full of commandments we Christians do our best to wriggle away from.

But here Jesus isn’t issuing a commandment. He isn’t saying, “Thou shalt love God” or “thou shalt hate Mammon.” He’s just explaining how it works. He’s simply identifying a law of the universe. It’s a rule, but it’s not the kind of rule you have to try to obey because it’s impossible not to live by it.

Pat Robertson is living by that rule. He’s declaring that he has taken sides, as we all do and as we all must. $100 billion? Pat’s all-in for Team Mammon.

The thing about Team Mammon is that its all-encompassing. If you choose to love Mammon, then it ain’t just God you’ll inevitably hate. It’s everything else — every other ideal or principle or grand notion you want to imagine you’re devoted to upholding. It will all be assigned a price and it will all get sold when that price is met.

And according to Pat Robertson, $100 billion is more than enough to compensate for the exchange.

For an alternative to Robertson’s Mammon-realism, I’d agree with Martin Longman agreeing here with David French: “Begin By Ending Cooperation in the Yemen War.”

French is a National Review columnist and would be described, in some (very small) circles, as a “prominent evangelical leader.” In those same (very small) circles, it’s considered unfair for Vox’s Tara Isabella Burton to refer to Pat Robertson as a “prominent evangelical leader.” That’s a smear or a caricature, they say. Robertson is a TV personality and a notorious clown. He’s not a serious figure in American religion or politics.

And partly because of that, Pat Robertson is also a prominent Republican leader. The guy carried four states in the Republican primaries 30 years ago and has had a hand in supporting every GOP electoral success since then.

None of this makes Pat Robertson a serious person. But it does mean we have to take him seriously.

And taking him seriously means acknowledging that Pat Robertson — whacky, weird, perpetually befuddled Uncle Pat — is seriously evil. He loves Mammon and, therefore, he hates God. And he’s convinced millions of other white Christians to do the same.

October 19, 2018 LBCF, No. 206: 'Meta-New Hope Village Church'
Recent Comments
0 | Leave a Comment
"While we like to think that we can be good even in a bad environment, ..."
arcseconds The bad lieutenant
"Unfortunately it's not a brand new poster. He's been here for a few weeks, changing ..."
Amtep The bad lieutenant
"There's a goals of care discussion that's supposed to take place before the patient ever ..."
Vittles The bad lieutenant
"Oh...well, at least he wasn't a creepy neighborhood ‮elihpodep‬..."
reynard61 The bad lieutenant
Browse Our Archives
Follow Us!