Steve King can explain his abortion politics in 14 words

Republican Rep. Steve King of Iowa likes to travel to Europe to fellowship with other far-right white ethnonationalists. While over there yet again this summer he gave a long interview with a far-right website. “Rep. Steve King Goes Full White Nationalist In Interview With Austrian Site,” Christopher Mathias and Nick Robins-Early report.

Steve King is enthusiastically racist. This is the same guy who has repeatedly retweeted white nationalist propaganda from straight-up neo-Nazi websites like Stormfront and Vdare. Because he liked what they said. And how did he know what they were saying? Because Steve King reads those sites. King has been like this for a very long time.

That’s why no one was surprised this past week when King chose to wade in to — of all things — the mayoral election in Toronto. Why is a congressman from Iowa weighing in on local politics in another country? Because there’s an outright white nationalist running for mayor in Toronto, and wherever an explicit white nationalist is running for office — in the U.S., in Canada, in Austria or France — Steve King feels compelled to lend his support.

Maybe you’re thinking “white nationalist” is hyperbole. Nah. Toronto mayor wanna-be Faith Goldy, as Gabrielle Bruny explains, is: “not just your typical dog whistling far-righter. She recited an infamous white supremacist slogan on a podcast, she gave an interview to the Daily Stormer, and she attended the Unite the Right Rally in Charlottesville.”

Steve King loves all of that:

Faith Goldy, an excellent candidate for Toronto mayor, pro Rule of Law, pro Make Canada Safe Again, pro balanced budget, &…BEST of all, Pro Western Civilization and a fighter for our values. @FaithGoldy will not be silenced. https://t.co/uqkeaUjm7i

You don’t need a racist decoder ring to understand what King is saying there with “safe” or “Western Civilization” or “our.” He means “white,” “white,” and “white.” Everybody in Iowa knows this is what Steve King is saying — what he is always saying, no matter what other topic he’s asked about or ought to be addressing instead.

That’s why Iowa’s Des Moines Register is endorsing his opponent in November:

This one’s a no-brainer for any Iowan who has cringed at eight-term incumbent King’s increasing obsession with being a cultural provocateur. In his almost 16 years in Congress, King has passed exactly one bill as primary sponsor, redesignating a post office. He won’t debate his opponent and rarely holds public town halls. Instead, he spends his time meeting with fascist leaders in Europe and retweeting neo-Nazis.

It’s why former Sioux City Explorers pitcher J.D. Scholten has raised a ton of money to challenge King’s complacent incumbency. It’s why the dairy farmers in King’s Iowa district are sick to death of his immigrant-bashing uselessness.

And it’s why even the anti-abortion white evangelicals whose support has given King eight terms in Congress are starting to question whether they can continue to overlook his ferocious racism:

Very Nice People like the white evangelical woman quoted there had previously supported Steve King because he said all the same things they did about abortion. King’s ardent white nationalism — the stuff that made Klansman David Duke shout “God bless Steve King!” — might have made some of those voters uncomfortable, but they were able to overlook that as long as he was running against a baby-killing Democrat.

That is, after all, the purpose and function of single-issue abortion-is-murder-heck-it’s-the-Holocaust-no-wait-it’s-worse-than-the-Holocaust politics. It’s designed to make otherwise Very Nice People overlook all sorts of other very bad things and hold their noses to vote for people like Steve King.

Those VNP always want others to know that their consistent, unquestionable support for people like King doesn’t necessarily mean they approve of those other things King says. But they have to overlook all of that — they have to — because of abortion-is-murderism. For those voters, these two things — Steve King’s anti-abortionism and Steve King’s white nationalist racism — are separate and distinct.

But for Steve King himself, these two things are not separate and they cannot be separated. For King, anti-abortionism is a necessary complement to white nationalist racism. It’s an expression of those 14 words that Faith Goldy recited, thereby earning King’s endorsement.

King explains this in that Austrian interview:

King’s conversation with Sommerfeld largely revolves around the paranoid idea of the Great Replacement — the belief that mass migration, particularly from Muslim-majority countries, is an extinction-level event for white European culture and identity. Or as he put it in the interview, a “slow-motion cultural suicide.” 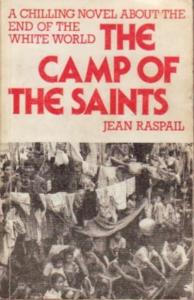 “The U.S. subtracts from its population a million of our babies in the form of abortion,” King said. “We add to our population approximately 1.8 million of ‘somebody else’s babies’ who are raised in another culture before they get to us.”

Sommerfeld responded, “That’s what we call the Great Replacement.” …

The idea of the Great Replacement is imagined most vividly in The Camp of the Saints, a stunningly racist 1973 novel by Jean Raspail that “reframes everything as the fight to death between races,” said Cécile Alduy, a professor of French at Stanford University and an expert on France’s far right. It describes the takeover of Europe by waves of immigrants that “wash ashore like the plague.”

In the interview, King said that he read the book and that it was “completely logical to me that this could come to pass.” He went on to describe how he believes George Soros, the billionaire philanthropist and bogeyman of the far right, might be footing the bill for the Great Replacement.

Steve King is not pro-life, he’s pro-white. He’s not anti-abortion, just pro-natal — but only for his own “white race” (Soros and other Jews not included). He doesn’t care if non-white people have abortions. Heck, he’d make it mandatory if he could — all the better to stave off the Great Replacement he obsessively fears.

But Very Nice Christians will vote for Steve King, again, in November. And they’ll explain to you that this is because of Jesus.

October 22, 2018 Lantern flies, endless wars, and swallowing a horse
Recent Comments
0 | Leave a Comment
"YEC requires a vast ignorance about geology in general and when you point out any ..."
SmogMonster Oops
"On the one hand: it's really not supposed to look like a real hedgehog; it's ..."
SmogMonster Oops
"Burritos!"
P J Evans May 21 Flashback: Southern Baptist shrimp
"https://twitter.com/visegra...Young, urban Russians attend a concert in St. Petersburg.The entire crowd is chanting “F the ..."
Skybison Oops
Browse Our Archives
Related posts from slacktivist