Won’t you come and see me All Saints Day?

• “It was Protestant fear of Catholicism that made Halloween appear less Christian,” for Protestants. That’s from Beth Allison Barr’s nice little rundown of “Why Evangelical Christians Are Afraid of Halloween.”

That’s a topic that can be covered in a single blogpost, but if Barr had just used the first five words of that headline — “Why Evangelical Christians Are Afraid” — then the world itself could not contain the books that would be written.

• I’m going to recommend Evan Hurst’s summary of the weird clown-car plot to undermine the Russian-mob sabotage investigation by paying women to make false allegations against Robert Mueller, because Wonkette’s tone is more appropriate to this story — more accurate for this story — that conventional journalism allows: “TFW You Try To Pay Women To Accuse Robert Mueller Of Rape But Just End Up Boning Yourself.”

For a taste 0f the James O’Keefe-level of competence involved in this ratf–king scheme, consider that these bozos were operating from behind the cover of a sham company called “Surefire Intelligence,” the hastily constructed website of which features lots of stock-photo models as supposed employees. And also two-time Academy Award winning actor Christoph Waltz. 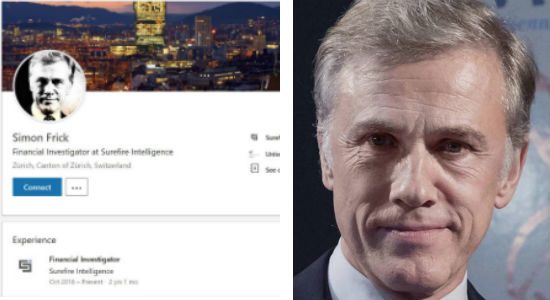 But keep in mind the target-audience for this nitwittery. It may be as shamelessly and artlessly obvious a fraud as James O’Keefe’s hatchet job targeting Planned Parenthood, but Very Serious White Evangelical Thinkers still took that seriously and still — to this day — vaguely think that Planned Parenthood was somehow shown to be “selling baby parts.”

John Cole sums up “the most depressing aspect of this whole thing,” which is “WHY they thought it would work”:

They thought that they could easily find women to come forward, accept money, and lie about sexual misconduct on the part of Mueller because THEY DON’T BELIEVE WOMEN WHO HAVE BEEN VICTIMIZED. They think it is all made up. They don’t believe women are sexually harassed, they don’t think they are assaulted and raped, they think everyone coming forward is doing it because they have ulterior motives, whether it be fame, fortune, or in Dr. Ford’s case, they love abortion so much that they just had to stop Kavanaugh.

And the reason it never occurs to them is because to them, women are not people. They are objects- servants when needed, playtoys for sexual release or gratification, impediments in the workplace when it comes to promotion, things to look at, things to help them feel better about themselves, and in this case, tools to achieve a political ends.

(And that also precisely explains white evangelical credulity for those lies about Planned Parenthood too.)

• On a related note, here’s a look at Jair Bolsonaro, the newly elected president of Brazil who won election thanks to the overwhelming support of — yes — white evangelical voters:

It’s shocking and repulsive enough to have a woman be told – in a major nation’s Congress where she serves – that she’s not worth raping. What makes it even more sickening is that this is the second time Bolsonaro has said this to her. In her first year serving in the Congress, he screamed at her in a crowded hallway, telling her that she didn’t even merit being raped by him. He then called her a “slut” (vagabunda). And that time, for good measure, he also pushed her, then told her to “cry! go cry” – all in front of journalists who filmed the entire episode.

Some will argue that most of Brazil’s 40 million+ evangelical Christians are not “white”-skinned or demographically “white.” Irrelevant. Their creed — nationalistic, aggrieved, patriarchal — is the creed of white evangelicalism. It is white theology — a reflection of the colonial American version of white theology planted like a flag all over the world.

(Alas, it’s the 31st and I’ve apparently used up my monthly allotment of free reads at the Christian Century, but we’ll come back to this after the calendar flips a page and look at Willie James Jennings’ essay on the “fusing together of Christianity with whiteness” and its legacy in missions.)

• And on a related note to that, here’s the Rev. Lawrence Ware on how “White Evangelical Support of Trump Proves They’re More ‘White’ Than ‘Evangelical.’”

Ware joins the chorus calling shenanigans on the recent spin-cycle poll-parsing from LifeWay and Christianity Today attempting to minimize the indictment of their religion plainly revealed in its support for and empowerment of white nationalist Trumpism:

Evangelicals can try to rewrite history via revisionist polling if they want, but, to quote the urban philosopher Shawn Carter: “men lie, women lie, numbers don’t.” Put simply, whiteness with a side of misogyny was the primary reason why what happened on Nov. 6, 2016, happened.

• In retail, All Hallow’s Eve is Pre-Black Friday Eve — great deals on appliances at the Big Box starting tomorrow! Christmas shopping season may not really kick in until after Thanksgiving, but Christmas selling season begins November 1. If a retailer started using Van Morrison’s “All Saints Day” to hype its “Pre-Black Friday” sales, I would find that sacrilegious — not of the holiday as much as of Van Morrison.

(This is a pretty cool video, shot by drone in London and in Dublin’s Glasnevin Cemetery. The big tower there marks the grave of Daniel O’Connell.)

The Peripatetic Preacher God: The Problem
I obviously having absolutely nothing genuinely new to add to the discussion...
view all Progressive Christian blogs
What Are Your Thoughts?leave a comment
Copyright 2008-2020, Patheos. All rights reserved.