Bearing true witness about our neighbors

Here’s a story about a Christian pastor getting it right: “Pastor Wanted to Know the Truth About the Migrant Caravan. So He Joined It.”

This is an article from “ChurchLeaders” — a website of, by, and for American white evangelicalism. Good on them for running it.

A Texas pastor is traveling with the migrant caravan in Mexico. Gavin Rogers, associate pastor at San Antonio’s Travis Park United Methodist Church, has been documenting his journey—and the relationships he’s forming—on Facebook.

Hoping to dispel fear and falsehoods about caravan members, Rogers is sharing photos of what the migrants and the people helping them really look like. “Kindness is all over the place,” he writes next to posts of “real images of Mexican police officers and refugees.”

The pastor criticizes people, including Christians, who are sharing images about “the supposed violence in the caravan.” When someone posted to Rogers’ Facebook page photos depicting violence, an image search revealed they were actually from 2012. One such post has been removed, probably because of its misleading nature. Local officers Rogers has talked to say the caravan has been overwhelmingly peaceful, with no police-related conflicts.

What Rogers is doing here is witnessing and bearing witness. He is observing with his own eyes and telling the truth about what he sees. That requires him also to condemn his nominal fellow Christians who are not witnessing, yet still feel entitled to bear witness — to bear false witness against their neighbors:

“Creating fear is a tactic that is continually used to separate people and label the other,” the pastor writes. “People, especially people who proclaim Christ, who post such obvious [lies] should apologize and delete the garbage.”

The willingness of so many white American Christians to bear false witness against these neighbors — to seek out, to desire, and to accept such false witness, and then to eagerly pass it on — says a great deal about the substance and quality and meaning of their purported faith. Is it possible to love God while hating these neighbors? The Bible repeatedly says it is not.

The same Bible also relentlessly commands us to be generous, hospitable, and just to strangers and aliens and refugees. This is stated as a direct commandment more than three dozen times. More than that, justice for oppressed aliens is repeatedly presented as the basis for every other commandment — for we were strangers in Egypt. The nature and identity of God is explicitly based on this same thing: “I am the Lord your God who brought you out of Egypt, out of the house of slavery.” That’s who God is. That’s what God is. That’s what God does. 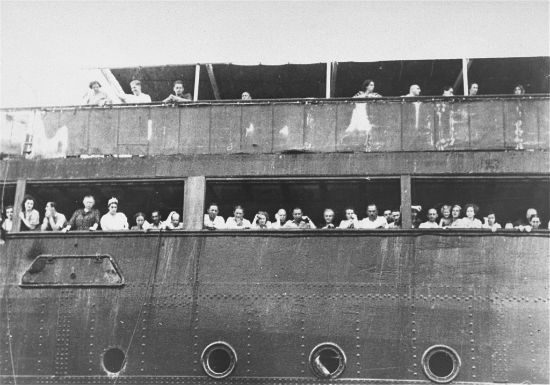 It’s important to recognize that Rogers is bearing true witness about his neighbors to those who have been seeking and spreading false witness about those neighbors because this reminds us of another over-riding and under-girding fact that has to shape any Christian’s beliefs about immigration and immigrants: These are our neighbors. Borders and boundaries and categories like “foreigner” or “alien” or “immigrant” cannot be allowed to have any bearing on Christian ethics or Christian behavior toward these our neighbors.

The truth that Gavin Rogers has witnessed, and to which he bears witness, is that these neighbors are fleeing for their lives:

Refugees sharing their stories with the pastor tell of having their children kidnapped and other relatives killed in Central America. Their journey, Rogers says, is “not about a better life in American terms, it’s just about living.” Their goals, he adds, are to seek an education for their children and “be free from violence and rape and murder.” Rogers admits that claim may sound “extreme,” but says he has firsthand knowledge, obtained by being “willing to talk and learn,” that it’s “exactly what is going on here.”

But Gavin Rogers is aware that he’s speaking to white American Christians who have been trained and rehearsed and discipled to see everything through a Foxified lens that denies any meaning or objective reality other than the constant search for opportunities for partisan point-scoring. This is, after all, a “Christian” audience that will spend the next several weeks treating weaponizing every holiday greeting as a partisan tool. These are people for whom everything — faith, facts, neighbors — has been politicized.

Their nationalistic faith prevents them from seeing the transnational, whole-world imperative of loving their neighbor. And their nationalism — in Orwell’s sense of the word — forces them to view neighbors fleeing violence and tragedy as something to be interpreted only for its partisan implications. “A nationalist,” Orwell wrote, “is one who thinks solely, or mainly, in terms of competitive prestige. They may be a positive or a negative nationalist — that is, they may use their mental energy either in boosting or in denigrating — but at any rate their thoughts always turn on victories, defeats, triumphs and humiliations.”

It’s almost impossible for those shaped by the habit of nationalism to witness anything — even the plight of desperate and impoverished strangers — without interpreting it through that lens of competitive prestige, of solely partisan victories, defeats, triumphs and humiliations. They have been catechized to evaluate Rogers’ testimony based solely on whether it is beneficial or harmful to their party’s hold on power. If his testimony is perceived to be beneficial to their party, then it will be accepted. If it is perceived to be harmful, it will be rejected.

Rogers is aware of that, which is why he says things like this:

The only Christian response to immigration, Rogers says, is to “love your neighbor as yourself.” He points to Old Testament verses, such as Leviticus 19:33-34, that instruct God’s people to not mistreat foreigners residing among them but to “love them as yourself, for you were foreigners in Egypt.” … “And so I am not interested in politics,” Rogers says. “I’m interested that we as people can learn to embrace the immigrant.”

Loving your neighbor is pervasively, unavoidably political. Welcoming refugees is a political act. So is turning them back toward death. So is standing by and idly watching it unfold.

But Rogers knows that he has to say this is not about “politics” and that he is not “interested in politics” because it’s his only hope for maybe, just maybe, getting his fellow white American Christians to hear what he’s saying and to see what he’s seeing without reinterpreting it all through that distorting nationalist lens of competitive prestige.

For more on Rogers’ journey, here’s a story from a local ABC affiliate in Texas: “Local pastor joins migrant caravan in Mexico.”

November 23, 2018 LBCF, No. 211: 'That Guy'
Recent Comments
0 | Leave a Comment
Browse Our Archives
get the latest from
slacktivist
Sign up for our newsletter
POPULAR AT PATHEOS Progressive Christian
1