• I’ve lost track of the layers and players involved in the recent legal dispute between Warner Brothers studio, producers of The Chilling Adventures of Sabrina, and the Satanic Temple. The Temple sued the show due to its featuring a Baphomet-style statue that looks an awful lot like its own trademark statue.

So on the one hand we have a TV show that’s nominally about Satan-worshipping witches, but which uses that setting as a funhouse-mirror lens for exploring organized religion in general and Christian churches in particular. On the other hand is a nominally Satanic “church” that specializes in theatrically disruptive spectacles that it uses to critique organized religion in general and the quasi-established hegemony of Christian churches in particular. And at issue between them is the design of a statue which, in turn, is based on a centuries-old imaginary deity — Baphomet — who was invented by inquisitors as something to accuse their political enemies of worshipping. (Yes, I realize many people consider all deities to be imaginary. But I don’t mean that Baphomet itself is imaginary, I mean that its worshippers are. No such worshippers ever existed.)

So we’ve got a whole bunch of symbols that mean several things at once and different creative people using that shared imagery in different ways to make somewhat similar points.

Part of the conflict, I think, has to do with how many layers of irony one ought to employ in reimagining or reclaiming the imagery of Baphomet and/or Satan. Both the Sabrina creators and the Temple approach these with multiple layers of irony, but the show involves an even number of them while the Temple prefers an odd number.  (I think — as I said, I’ve lost track of the layers here.)

Anyway, the suit has been “amicably” settled.

• Speaking of the Satanic Temple getting ripped off: People keep stealing ornaments off of their holiday tree in San Jose’s “Christmas in the Park” display. It’s probably not malicious vandalism or even the kind of prank that results in the annual theft of the baby Jesus from the event’s Nativity scene. It seems people just like their ornaments because, well, they’re kind of cool.

• Christmas displays in the park are one beloved, long-running American ritual. Here’s another: “Texas Venue Defends Ghost From Horrified Pastor.” Ghost is a Swedish band that specializes in the kind of performances designed to horrify Texas pastors. The pastor in question runs the kind of church that exists primarily to be horrified by Swedish heavy metal bands. It’s so nice that they found each other — there’s a lid for every pot.

• For the second year in a row, the Google news alert in my RSS feed for the word “Satanic” has produced a remarkable number of news stories involving Melania Trump’s holiday decor for the White House. There’s maybe a fine line between holly-berry red and gory bloody red, but the effect is striking. (I like it more than last year’s Jadis-ruling-over-Narnia theme.) 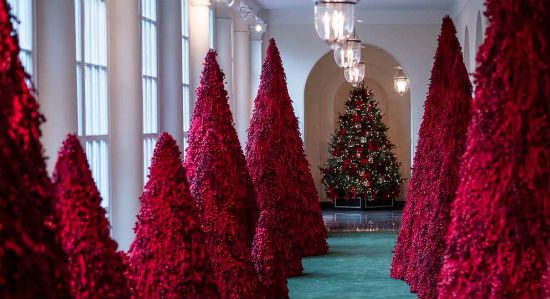 • “Is Celine Dion Working With the Devil?”

Msgr. John Esseff says the singer is nefariously serving the Evil One by undermining the patriarchy with her new line of gender-neutral onesies for infants. Esseff was quoted in a piece from the right-wing National Catholic Register — a publication with the ethics you’d expect from a rag whose whole shtick is trying to trick readers into thinking they’re reading legitimate journalism from the National Catholic Reporter. (Think of the Register-Not-Reporter as the Catholic equivalent of a Texas pastor perpetually railing against Scandinavian metal bands.)

Who is John Esseff? Well, he’s an exorcist and the founder of a training academy for exorcists. He’s Bob Larson, basically, but in purple. The faux-NCR seems to think Esseff is credible because he’s also a monsignor in the Diocese of Scranton.

All that proves, though, is that Esseff is an utterly clueless and incompetent exorcist. The Pennsylvania grand jury report released earlier this year identified 59 priests from the Diocese of Scranton as sexual abusers of children — 59! Esseff was silent for years while dozens of predator priests served in his diocese, but now at last he’s speaking up … in order to condemn a new clothing line from Celine Dion. I would not hire this man to identify and exorcise the presence of evil. He can’t reliably do either.

• The Fort Morgan (Colo.) Times just finished a fun series bylined by the small-town paper’s “Community History Writers.” I like the idea of that — using the paper as a means of preserving and recording a community’s memory.

I also enjoyed the long story itself, the gist of which can be gleaned from the headlines of its six parts:

Scully gets the last word, but there’s a good bit of Mulder in there too.