Advent Calendar Day 17: Fair and foul are near of kin

“Crazy Jane Talks With the Bishop,” by William Butler Yeats

I met the Bishop on the road
And much said he and I.
“Those breasts are flat and fallen now
Those veins must soon be dry;
Live in a heavenly mansion,
Not in some foul sty.”

“Fair and foul are near of kin,
And fair needs foul,” I cried.
“My friends are gone, but that’s a truth
Nor grave nor bed denied,
Learned in bodily lowliness
And in the heart’s pride.

“A woman can be proud and stiff
When on love intent;
But Love has pitched his mansion in
The place of excrement;
For nothing can be sole or whole
That has not been rent.”

We have three different kinds of Nativity scenes on sale at the Big Box for your Christmas decorating needs, all suitable for the mantel of any fireplace in any home. (Don’t have a mantel? We sell those too. And if you need a fireplace installed, please see the good people at our service desk.) There’s also an inflatable Holy Family lawn display and an even larger LED-and-glitter-frame Nativity Scene Lawn Ornament.

My family always had a creche on the mantel above our fireplace at Christmas time. It was a small wooden model of a stable — with the fourth wall removed as in a stage set. Sitting within it were small china figurines depicting Mary, Joseph, and the baby Jesus, as well as three shepherds, four sheep, and a cow. Plus three wise men bearing gifts. (We knew it was a bit off, putting the wise men there in Bethlehem on the night of Jesus’ birth, but we were also low-church evangelicals, so Epiphany wasn’t really a thing for us.)

We added one more figurine to our collection after my oldest sister spent her junior year of college studying abroad at the Universidad de Barcelona, but that one never actually got displayed with the rest. A caganer may be a traditional part of the Christmas celebration in Catalan, but not in New Jersey. 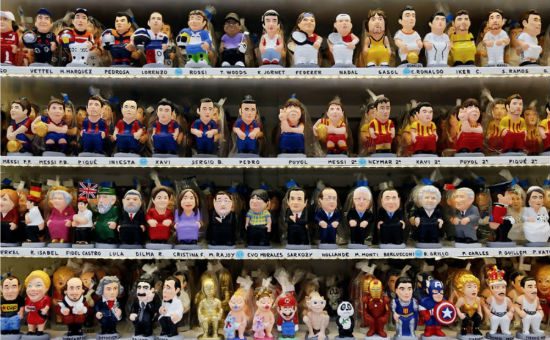 Caganer means, well, “crapper,” or “pooper,” if you want to be more delicate. A Christmas caganer is a figurine of someone — traditionally an anonymous peasant in traditional dress — squatting and pooping. These days you can buy a caganer modeled after almost any famous celebrity or politician. (There may still be time to order yours now and have it arrive in time for the holidays.)

The history of how such figurines became such a popular distinctive feature for Nativity scenes in Catalan is a bit murky. I like the suggestion from this Barcelona tourism website, even though it’s probably meant mostly as a joke:

Originally, El Caganer wasn’t a figure in the nativity scene but was mainly depicted on tiles telling stories and only became popular as a nativity character from the 19th century onward.

How this happened is a matter of dispute but it has been suggested that Catalans traditionally referred to new-born babies as caganers because they do little else other than eat, sleep and defecate.

Consequently, when visitors came round at Christmas, they would look at the nativity scene and ask their hosts “Have you put in the caganer yet?” referring to the baby Jesus.

At some point an imaginative manufacturer of nativity figure must have decided to turn the tile character into a nativity model and so the tradition of El Caganer was born.

I like this because the baby Jesus was, in fact, a baby. And, like all babies, he was a little caganer. This is what incarnation entails. If you’re going to believe in incarnation — in Christmas — then this is part of what that means.

Fear not: for, behold, I bring you good tidings of great joy, which shall be to all people. Love has pitched his mansion in the place of excrement. Gloria in excelsis Deo.