I often think of that insight because it’s true for me as well at the movies. Like Ebert, I’m not usually affected by “the deliberately sad films, the ‘weepies,'” but rather by those stories of “goodness — about people acting bravely or generously or in self-sacrifice.”

The really great stories — the ones that move and inspire and stay with us, the ones that change us — are these stories about goodness. They’re stories about people making choices to help others, to do the right thing, even when they know it will involve a great cost. I think Ebert was on to something there, and not just when it comes to film-making or story-telling. I suspect this suggests something larger than that, something about why we’re all here.

I’ve been thinking about Ebert’s insight all this weekend because I’ve spent the past few days intermittently crying, getting it together, then feeling it hit me again. “I’m fine,” I lied to the nice lady making my Wawa hoagie, “allergies.” I’ve been a bit of a mess. 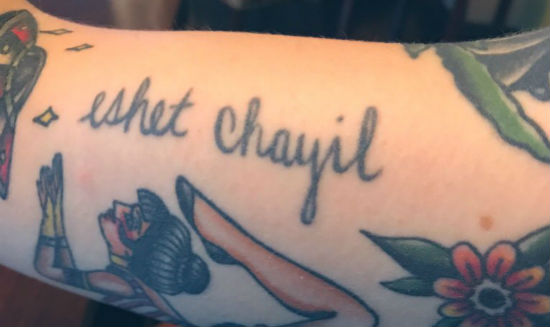 The story that hit me so hard is, in a sense, a classic “weepy.” It seems like just the kind of manipulatively melodramatic tragedy that Hollywood loves to churn out to make us cry. A vibrant young woman — witty, charming, smart, full of talent, full of life in every sense — is suddenly struck down by an unexpected medical condition. She was only 37 and she leaves behind a loving, grieving husband and two very young children, one just barely a year old.

That’s an unbearably sad story. It’s horribly depressing and infuriatingly unfair. Every aspect of it is heartbreaking and shattering to contemplate. And it isn’t just some movie, it’s real life. Real death.

Yet for all the overwhelming sadness of that story, I don’t think that entirely explains why I and so many others have found ourselves so utterly wrecked this weekend.

The reason this story makes tears come to our eyes is because it is a story about goodness. A story about someone who was brave and generous, someone selfless who believed and nurtured and demonstrated “the good of the human race.”

The many fine articles reporting her death struggled to capture just why this sad news has been so affecting to so many. There’s a form and a structure to obituaries, a summarizing and listing of notable achievements and biographical details. These reports note that Rachel was a best-selling author, and a “hugely popular Christian writer who challenged the evangelical establishment.” They list her books and note her massive following on social media.

But to really understand the significance of this story — the story not just of Rachel’s death but of her life — we have to turn away from those obituaries and back to social media to read the stories and testimonies of the many people whose lives were touched, and changed, by her words and deeds. These are stories “about goodness” — about generosity and bravery and selfless choices, made again and again, on behalf of others. They are stories of someone who was unfailingly kind while also being unfailingly honest, refusing to choose one over the other.

I’ve written a lot about Rachel Held Evans here, including this 2013 post about the subtle, beautiful form of leadership she seemed to exemplify. She was already then, I wrote, “an important leader among evangelicals”:

That fact has gone under the radar somewhat because she doesn’t fit the model of what American evangelicalism expects its “leaders” to look like. Or, at least, she’s leading in a way that many of the established “leaders” in evangelicalism don’t recognize as “leadership.”

She’s not the president, founder and CEO of any institution. She doesn’t seem to seek or to wield much in the way of power. And yet it seems to me that she’s influenced as many people as deeply as any of the magazine-cover-profile type president/founder/CEO/senior pastor celebrities of the evangelical world.

My “Bonfire” list of Christian women bloggers is up over 1,100 now. Evans is just one name in that list, yet her influence, encouragement and generosity is reflected in scores of other voices represented there. Her influence reminds me of that famous quote from (maybe) Brian Eno, about the Velvet Underground: “The first Velvet Underground album only sold 10,000 copies, but everyone who bought it formed a band.”

I’m guessing that when Rachel reads this, it will make her immensely uncomfortable. She’ll squirm a bit at being singled out and she’ll want to insist that it’s wrong to praise her for such alleged leadership without also praising many, many others — Kristen Howerton, Sarah Bessey, Addie Zierman, Krista Dalton … and many, many more. And she’d be right about that. Rachel Held Evans isn’t alone.

That’s really at the heart of the kind of “leadership” I think she represents. It’s not about amassing power for oneself, it’s about sharing it to empower others. It’s a walking-with rather than a standing-above kind of leadership. It’s a kind of power that people who seek power don’t even recognize as power.

Rachel was always passing the mic to others whose voices weren’t being heard and stepping away from the spotlight to let it shine on others. She was relentlessly encouraging. Like countless others, I was blessed to have randomly received short notes of thanks or encouragement from her that arrived with the kind of timing one is almost forced to think of as providential.

We don’t have her with us any longer to provide that encouragement, but she showed us how to do it. And so now we will have to carry on doing it as she taught us.

This hurts. It feels selfish or greedy to allow that hurt when we contrast it with the deeper pain and loss now felt by her husband and children and family, by those who knew her and loved her best. But for many of us who only perhaps met her briefly in person and otherwise knew her only through her writing, there’s still a vast, unthinkable Rachel-shaped hole that seems outrageously unfair and unacceptable. She seems irreplaceable.