The age of Kayfabe

Professional wrestling is the main hook here, but he also discusses the scripted unreality-posing-as-reality of much of the rest of our allegedly non-fiction entertainment fare — from cooking competition shows to all those pseudo-documentaries following pseudo-celebrity families.

I remember being surprised the first time I heard some local Philly actors talking about their appearances as guests on shows like Jerry Springer and Montel. I hadn’t watched shows like that, but I guess I’d always assumed they were “real” in the sense that the “guests” were actually what they were purported to be. But it turns out they’re not: The names are fake, the characters and scenarios are invented, and the guests are just hustling actors doing pre-outlined improv. The hosts are in on it. And so, in a weirder way, is the studio audience. And so, in an even weirder way, is the TV audience watching from home. 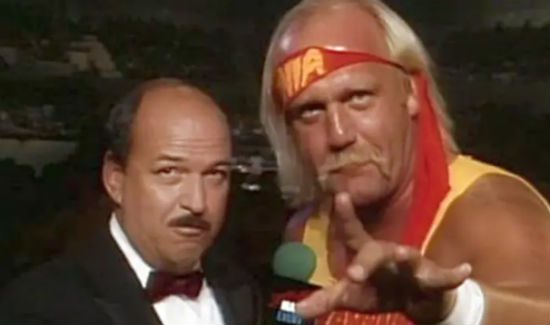 The product thus becomes something like Campos’ description of professional wrestling, a: “… mixture of the psychology of sports fans with that found in a theater: a kind of doubled or meta suspension of disbelief, in which the audience both believes and does not believe what it is witnessing is ‘real’ outside the confines of the mimetic script.”

This is why it’s not helpful to try to understand Fox News as the right-wing version of CNN. That’s not what it is. It’s the news-and-politics version of the WWE. It’s a form of theater pretending to be something else which its audience simultaneously knows and does not know is unreal. Enjoyment of the form requires this “meta suspension of disbelief” — requires both the knowing and the not-knowing.

Campos convincingly applies this “scripted reality” analysis and it’s “meta suspension of disbelief” to both Donald Trump and to the jaded, “savvy,” post-meaning realm of political journalism:

Politics and in particular political journalism have been infected by these various hybrid performance genres. Political conflict has long been reported as if it were a traditional athletic contest, in which the entire significance of the event is reduced to its competitive outcome (aka horse race coverage), or conversely as if it were a mimetic performance, judged in essentially aesthetic terms (aka theater criticism).

But the contemporary American political climate is marked by an increasing psychological hybridization, in which the mental states associated with reality television and scripted reality — that is, genres in which it what is “real” is presented in a deceptive and/or ambiguous way to the audience — become increasingly commonplace.

(I should note here that Chauncey DeVega has been making this argument for years — that professional wrestling may be the best interpretive lens for understanding America’s political-theater-as-politics.)

“Kayfabe” — the guiding principle of professional wrestling — is a slippery concept. It means something like staying in character or never breaking the “fourth wall” of theater. But it’s not quite that. It’s a bit more like moving the fourth wall so that it’s behind the audience, inviting and enabling and even in a sense requiring them to participate in the performance. That’s what makes professional wrestling work — not just the performers’ commitment to kayfabe, but that same commitment from the audience. The same is true for Springer and Montel. And for Fox News.

I think Campos (and DeVega) are on to something here. I find their analysis persuasive and insightful, but I’m going to sit and think on it a while more because I suspect we may also need to take this argument to church.

The scripted reality that provides the simultaneous belief and disbelief of the pro-wrestling fan might help us better understand what’s going on at Hillsong or the International House of Prayer. Or the Alabama legislature.