Partisanship and ideology are major factors in opinion about whether the U.S. has a responsibility to accept refugees. Yet there also are differences by race, age, education and religion.

The Bible says this. So, again, it seems that intra ecclesiam nulla salus. If you want to know God — if you want to be saved — then it’s probably best to avoid white evangelical churches. 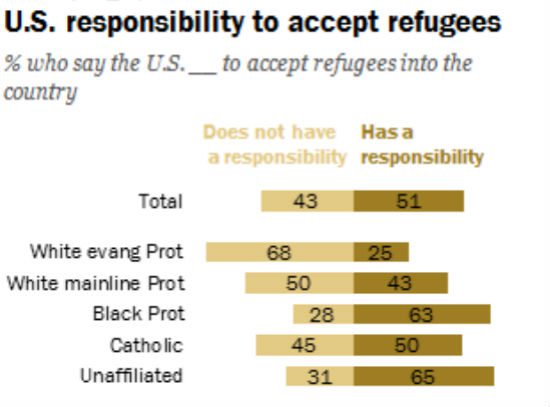 “Transcendentize” should be a word.

Yes, it would be an obnoxiously ugly word — a clumsy, awkwardly pretentious and high-falutin’ word. It would be the kind of fancy schmancy word that would always inject a note of “Look at me! Look at me! I’m a smarty pants!” along with whatever else it was attempting to communicate.

But that’s part of why this unlovely word is needed. Because it’s the necessary counterpart of an existing word for which all of that is also true. And “transcendentizing” is usually what people are doing when they use that other word.

That other word, of course, is “immanentize.” That one has been kicking around in theology and philosophy for more than a century, but it still seems unnaturally stilted. You can still see and hear it being wordified into being every time it’s employed, the haphazard seam of its stitched-on suffix still visible.

“Immanentize” is an unavoidably showy word. It conveys both the sense that the speaker has read and studied lots of theology and/or philosophy and the sense that the speaker wants you to know that. This is part of its appeal, as its often employed as an authoritative sounding word meant to end the conversation. “Don’t immanentize the eschaton” or “you’re immanentizing the transcendent” are both statements with actual meaning and substance, but they are also statements warning that no response will be heard or engaged unless it too rises to this level of extravagantly learned-seeming language.

The awkward verbification “immanentize” is almost always employed negatively, as criticism or a warning against a kind of imbalance. If imbalance in one direction is concerning, then it seems reasonable to conclude that imbalance in the opposite direction should also be concerning. Hence the need for an awkwardly verbified word to describe that opposite imbalance: “transcendentizing.”

You know what? Instead of verbifying another ugly new word into existence, let’s just fall back on some older, simpler words strung together in a bit of time-honored folk wisdom: “Don’t be so heavenly minded that you’re no earthly good.”

Or we could revisit some even older, plainer, and blunter language, from the author of 1 John. Because, again, this is right there in the Bible:

Beloved, let us love one another, because love is from God; everyone who loves is born of God and knows God. Whoever does not love does not know God, for God is love. …

Those who say, “I love God,” and hate their brothers or sisters, are liars; for those who do not love a brother or sister whom they have seen, cannot love God whom they have not seen.

That’s canon. It’s holy writ. It’s unambiguous and uncomplicated and as plain-spoken and straightforward as can be. “Whoever does not love does not know God.”

Recite that or show any sign of taking it seriously — as theology or philosophy, as ethics or as epistemology, as religion or as politics — and the transcendentizers will soon show up to condemn you for immanentizing. They’re so heavenly minded that they’re no earthly good.

And they do not know God, for God is love.