The heirs of the abstractions

Anthea Butler’s NBC News op-ed — “White evangelicals love Trump and aren’t confused about why. No one should be.” — is going to upset a lot of readers. That’s a good thing, because Butler is speaking urgent, unvarnished truth.

The stark bluntness of that truth, though, is going to make what she’s saying difficult to hear — especially for the white evangelicals she’s talking about. They’re going to be indignantly defensive about this. That’s not unusual, of course — indignant defensiveness has become pretty much the default setting for white evangelicals in the 21st century. But if we’re going to help them get past that, help them to actually hear and absorb the necessary truth Butler is bringing here, then we need to understand why this particular diagnosis will make them particularly defensive — and why that response is somewhat understandable.

But focusing on the disconnect between Trump’s personal actions and the moral aspects of their faith misses the issue that keeps their support firm: racism. Modern evangelicals’ support for this president cannot be separated from the history of evangelicals’ participation in and support for racist structures in America.

Butler follows this with a rapid-fire history lesson, highlighting case after case of white evangelicalism taking the wrong turn at every crossroads at which they might have turned away from “participation in and support for racist structures in America.” It’s a convincing litany.

But it won’t be convincing to most white evangelicals because they don’t understand “participation in and support for racist structures” to be what racism means. “Racism,” as they have been (conveniently) taught to understand it, means individual acts of conscious, individual animus. To their credit, they agree that such individual acts and individual animus are bad. They’re proud of recognizing that, which is part of what makes their defensiveness at the identification of racism a mostly genuine, mostly sincere response.

You start out in 1954 by saying, “N—r, n—r, n—r.” By 1968 you can’t say “n—r” — that hurts you, backfires. So you say stuff like, uh, forced busing, states’ rights, and all that stuff, and you’re getting so abstract. Now, you’re talking about cutting taxes, and all these things you’re talking about are totally economic things and a byproduct of them is, blacks get hurt worse than whites.… “We want to cut this,” is much more abstract than even the busing thing, uh, and a hell of a lot more abstract than “N—r, n—r.”

The white voters in 1954 who supported white supremacist candidates saying “N—r, n—r, n—r” could not deny that they were racist. But then they didn’t want to deny it. By 1968, they did want to deny it, so they latched on to euphemisms like “forced busing, states’ rights, and all that stuff” (“law and order” was another key shorthand for this) to afford a measure of deniability. But by the 1980s, the heirs of those same voters were supporting the heirs of those same candidates — and often those very same individual candidates — because they liked what those candidates were saying about “cutting taxes” and “totally economic things” which were “a lot more abstract.” Those heirs of the abstractions were not fully aware of the racist agenda those abstractions had been designed and tested and embraced to serve as proxies for.

So by 1984, you’ve got white evangelical voters rallying to re-elect Jesse Helms in North Carolina. These white evangelicals weren’t all raised and indoctrinated in “N—r, n—r, n—r,” but they were born and baptized into a faith in which all of those proxy abstractions were unquestioned, unquestionable dogma. In their minds, they didn’t support Helms because he was an outright racist fighting with all his might to roll back the Civil Rights Movement, they supported him in spite of that because they almost genuinely believed in his agenda of lower taxes, “smaller government,” deregulation, and Reaganism, his opposition to legal abortion, and his affirmation of the infallibility of the authority of scripture. They recognized that Helms’ racism was a bad thing, but all of those other factors were, in their minds, Good Things — evidence of Helms’ goodness and of their own. And surely all of that good outweighed the bad.

These folks did not understand that all of that arose as a more abstract way of saying “N—r, n—r, n—r” and of defending and promoting all the same policies that slur served as a slogan for in 1954. The first generation of advocates for all of those things only cared about them insofar as they served as cloaks for that white supremacist ideology. Their heirs, though, almost genuinely believed that they genuinely believed in the cloaks without believing in the thing itself.

By 2016 that first generation of leaders from 1954 and 1968 was dead. In their place were a bunch of third-generation white evangelicals still toeing the same party line and promoting the thrice-abstracted, thrice-euphemized agenda of their forefathers. These white evangelicals have almost wholly convinced themselves that their great goal is to produce a Supreme Court majority made up of “overturn Roe” justices and not to produce a Supreme Court majority of Shelby County justices who will repeal the Civil Rights Movement as a whole and complete the work of the Second Redemption called for and begun by their explicitly racist forebears back in the 1960s.

The fact that there has never been such a thing as an overturn-Roe justice who was also not a fiercely Second Redemption justice is something these white evangelical heirs of abstraction have mostly chosen not to notice. To the extent they do notice it, they regard it as an unfortunate and bewildering coincidence. What are the odds? Gee, it sure is frustrating that all the anti-abortion justices we support also seem determined to wage war against the Civil Rights Movement and the Reconstruction Amendments, and that every last one of them regards doing that as the higher priority, almost as though that was the thing itself rather than the cloak used to mask it, but still this unbroken string of lamentable coincidences doesn’t change the fact that our opposition to legal abortion is wholly separate from their racism and evidence of our moral superiority that outweighs our decades-long, invaluable support for that racism, right?

And so these heirs of the abstractions are almost genuine in their indignation at being held accountable for the Second Redemption they’re helping to bring about. They’re defensive about having to defend their leading role in the decades-long effort to undo and overturn the Civil Rights Movement because, in their minds, they weren’t about that — they were about something “a hell of a lot more abstract.” Lifelong training in devotion to those abstractions keeps them in denial about what they undeniably have done and undeniably are doing.

That denial affords them the illusion of innocence. That illusion may not be terribly convincing from the outside, but from the inside, it can almost seem real. And when you almost wholly believe in your own innocence, you’re going to be almost genuinely offended when someone like Anthea Butler comes along and points out your complicity.

That’s why their defensiveness is understandable. It’s also why provoking such defensiveness can be a good thing. You can cling to illusions for a long time, but they won’t survive if you do it with clenched fists. 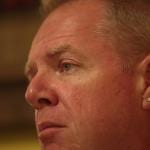 October 1, 2019 Stop me if you've heard this one before
Recent Comments
0 | Leave a Comment
Browse Our Archives
Follow Us!

#CFP Religion and the Future
CALL FOR PAPERS via RelCFP: Boston University Graduate Program in Religion Student...
view all Progressive Christian blogs
What Are Your Thoughts?leave a comment
Copyright 2008-2020, Patheos. All rights reserved.