While “Family Values” politicians were recently gathering in Washington, DC, for their annual “Values Voter Summit” in celebration of “traditional morality” and “Christian values,” Washington’s professional baseball team was in St. Louis for Game 1 of the National League Championship Series.

This series is a big deal for the Nationals, the team’s chance to make it to the World Series for the first time. But they had to play that first game without relief pitcher Dan Hudson, a key member of the team’s bullpen, because Hudson chose instead to be with his wife during the birth of their daughter.

Nats’ closer Sean Doolittle was asked what he thought about his teammate missing that huge game. Doolittle’s answer was good and beautiful and true: “If your reaction to someone having a baby is anything other than, ‘Congratulations, I hope everybody’s healthy,’ you’re an asshole.” 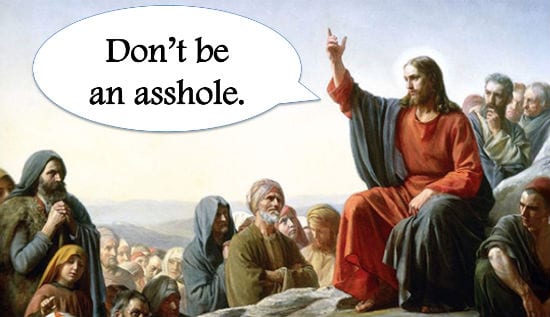 Some people celebrated the substance of Doolittle’s remark while balking at his use of PG-13 language. I understand that, because not so long ago, the word he used was considered rude, profane, and impolite. Saying “asshole” on the radio or on TV could get you fined by the FCC. But I think the word he chose was the right word and the necessary word — perhaps the only accurate and effective word to convey the necessary truth he was communicating.

Yes, this may be language that newspapers still are not allowed to put in print, but the word “asshole” retains its power, clarity, and meaning in a way that so much of our language about morality, ethics, priorities, and the meaning of life does not.

Consider how the gist of what Doolittle was saying there might once have been described as an assertion of “family values,” or as being “pro-family.” But to use language like that would require one to explain further, saying that one was using such terms based on what they would appear to mean rather than as what they have come to mean through overuse and misuse and abuse. Those terms have become debased — as has most of the language we might once have tried to use to speak of morality, about right and wrong choices, about good and bad behavior.

Just look again at that “Values Voter Summit” and everything said by all of the assholes invited to speak there. Their debasement of the language of morality is far more profane and rude than the word “asshole.” It deprives us of an earlier vocabulary that once helped us to articulate moral claims to ourselves and to one another. And when we lack language to articulate an idea, we become less able to focus on that idea, less able to grasp it or to understand it or to regard it as real. Our consciences aren’t just being silenced and suppressed and sedated, they’re also being deprived of any meaningful language to clarify the choices we face.

That’s why Doolittle’s use of the word “asshole” is so jarringly apt. It’s not only that the “crude” word seizes our attention, but that it performs the clarifying task that so much of our “moral discourse” is no longer able to do. The very crudeness of the term is part of what allows it to do this. Crude language resists the sanctimony that has degraded and diminished most of our language about morality, turning it into little more than a series of Orwellian euphemisms in service of bullying power-grabs.

That all gets swept aside by the stark precision of Doolittle’s mini-sermon. He reminds us that an asshole is something we ought not to want to be, something we’re all capable of choosing to be and of choosing not to be, and that there’s a right choice and a wrong choice there. Or rather, because we’re better able to hear it this way without all the cheapening baggage of the hijackers of moralistic language, that we will always be presented with an asshole choice and a non-asshole choice.

Oh, by the way, the Nationals won Game 1. Doolittle got the save, pitching a perfect ninth inning to preserve the shutout. And, more importantly, the Hudsons welcomed a beautiful baby girl and everyone is healthy. Congratulations to them.