Miller’s extensive correspondence with the “alt-right” aggregator site Breitbart — more than 900 emails — was sent to the venerable anti-hate agency as an act of penance by former Breitbart staffer Katie McHugh, who served as an editor there from 2014 through 2017. During those years, Miller served first as a legislative aide to then-Sen. Jeff Sessions, then as part of the Trump campaign, and finally as a senior policy advisor in the White House of Donald Trump — a position that Miller, now 34, still holds. 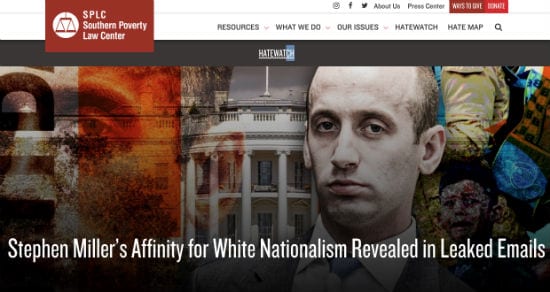 The emails show Miller enthusing over anti-immigrant, white nationalist propaganda as his preferred basis for Breitbart’s “reporting” and for the policy agenda of the Trump administration. As Hayden writes:

The emails, which Miller sent to the conservative website Breitbart News in 2015 and 2016, showcase the extremist, anti-immigrant ideology that undergirds the policies he has helped create as an architect of Donald Trump’s presidency. These policies include reportedly setting arrest quotas for undocumented immigrants, an executive order effectively banning immigration from five Muslim-majority countries and a policy of family separation at refugee resettlement facilities that the Department of Health and Human Services’ Office of Inspector General said is causing “intense trauma” in children.

The “intellectual” basis for Miller’s advocacy of such policies is far-right, defiantly racist source material like VDARE and the pro-ethnic-cleansing racist novel Camp of the Saints, which is basically the Turner Diaries of white nationalism. In other words, this ain’t some kind of genteel, politely euphemized white nationalism — it’s straight-up racist Neo-Nazi poison.

The public exposure of Miller’s fervently white nationalist emails matters because it cuts through the implausible deniability that Miller and the Trump administration have relied on to defend him up until now. Anyone with eyes to see had already seen that Miller’s anti-immigrant, anti-refugee, anti-everybody-not-white policies and beliefs appeared to be bald-faced white nationalism, but the administration and its defenders on Fox News would reply that this was just a “politically correct” attempt to slander Miller and Trump. “Evil leftists just go around smearing anyone who disagrees with them as ‘white nationalists’,” they would whine, and that slender thread of non-denial served to deflect the matter of substance, turning it into a matter of disputed opinion.

But now we have confirmation and documentation in the form of Miller’s own words. They prove — beyond any reasonable doubt — that he is a white nationalist ideologue, a man formed by and deeply immersed in white nationalist propaganda. We have proof that Miller isn’t merely being subjected to malicious accusations from political opponents intent on smearing his good name, but that he is — as a matter of undeniable fact — a full-on white nationalist of the David Duke variety, the kind of racist that an overwhelming majority of Americans would dutifully tell any pollster was beyond the bounds of acceptability for any role in public office. (There’d be a huge Bradley effect in that poll, but it would still show that this is what nearly all Americans believe it’s respectable to believe. It would confirm, in other words, that Miller’s views would be perceived as disrespectable even among most who shared his disrespectable views.)

As Christine Harrison wrote for the SPLC, the exposure of Miller’s views in his emails demonstrate “The importance of documenting racism in the White House.”

And yet this story still seems stuck in the partisan framing of “who’s to say what’s true?” Confronted with an unambiguous, undeniable fact — Stephen Miller is a white nationalist ideologue — reactions and reporting on the reactions to that fact have occurred mostly in explicitly partisan terms.

USA Today’s headline won’t even acknowledge the facts of the matter as laid out in Miller’s own words, pretending instead that his white nationalism is merely and inscrutable mystery of competing partisan claims: “Democrats call Stephen Miller ‘white nationalist,’ ask for resignation after SPLC report.”

This partisan framing removes the possibility of treating Miller’s overt white nationalism as ethically out of bounds. It puts it squarely back in bounds — back on the playing field for the never-ending game of Ds vs. Rs. The only thing that’s out of bounds, in this everything-is-partisan framework is us. We’re designated as spectators, not participants in the “game.” Our role is to watch the Ds and the Rs fight it out, cheering for our respective sides from up in the grandstand.

I think this is part of why the calls for Miller’s resignation or firing are coming almost entirely from Democratic members of Congress. Because the rest of us are being taught to think we don’t belong on the field.

When everything is forced into a partisan framework, then there is no longer any space for what we call “civil society.” No one else can add their voice without thereby being portrayed or perceived as “taking sides” in a perennial partisan dispute. I suspect that’s one part of why we’re not hearing demands for Miller’s resignation from churches, denominations, businesses, universities, sports leagues, civic groups, nonprofits, artists, fandoms, or any of the other affinity groups we all belong to, even though very few of them would publicly affirm that someone with Miller’s views has any business serving as a senior policy advisor in the White House.

But the stranger thing about this partisan framing is that it’s not wrong. Those headlines from ABC and NBC are accurate — Democrats are demanding Miller’s resignation; Republicans are not. The parties themselves have accepted this partisan framing of white nationalism. The parties themselves — both parties — have endorsed the idea that we hereby and hereafter have one party that opposes white nationalism and another party that supports it.

If there are any Republican elected officials who don’t fully endorse their new identity and function as the pro-white-nationalist party, then those Republicans are keeping those opinions to themselves.

Stephen Miller’s toxic ideology is too dangerous to be relegated to a purely partisan dispute. Miller’s — and Trump’s — white nationalist agenda involves politics and law and it must be combatted via politics and law. But it does not only involve those things. It is also an ethical problem — an ethical no-brainer, really. And our ability to maintain or enforce or in any way care about ethics will be diminished if we allow his presence in the White House to be wholly compartmentalized into the realm of partisan politics.

Everybody who has a voice — every group or organization with its own letterhead — should be demanding that Miller be fired. The SPLC and the SBC, the NRA and the NBA, NASA, IBM, ABC, NBC, CBS, REM, LMFAO … everybody.

They’re telling you they are not, in fact, reporters. Because that’s supposed to be the answer to the question “Who’s to say what’s true?” Reporters, that’s who. It’s their damn job. It’s their only damn job. And if they refuse to do that job, then who’s to say what purpose or use or good they do to anyone?

November 20, 2019 Helicopters over my house again
Recent Comments
0 | Leave a Comment
"what is the tittle of this pic?(☆_☆)"
TerrorTrike 12/1 Flashback: Cizik culture
"This is reminding me of the guy from usenet who insisted that fiction was an ..."
Ross 11/30 Flashback: Victims
"I wish I could find the article where they confronted an irish bishop about the ..."
Ross 12/1 Flashback: Cizik culture
"especially if they have spooky powers and/or live in a paintinghttps://media.tenor.com/aXc..."
SmogMonster 12/2 Flashback: Ideomotor
Browse Our Archives
Related posts from slacktivist