All right then, go the whole hog

Today is Mark Twain’s birthday. We celebrate this occasion on this blog by reciting a favorite passage from Huckleberry Finn.

Young Huck here is wrestling with what church and state and family and community have all taught him is his moral obligation. The Bible, he believes, teaches that it is his moral duty to return his friend Jim into slavery. This is also what the law requires — local, state, and federal. It is his duty as an American citizen loyal to the Constitution to recognize that his friend is stolen property, a fugitive without rights who must be put back in chains. 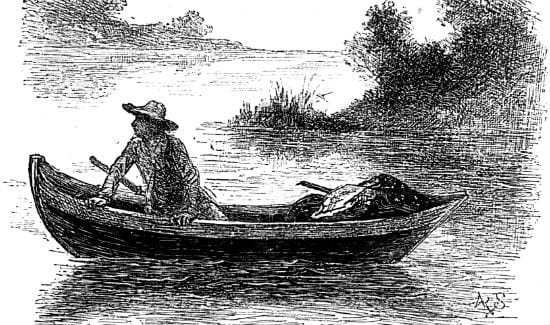 Huck knows what The Right Thing To Do is because he was taught what that was in school and in Sunday school and by every Christian and every respectable adult he has ever met. He knows he must ensure that Jim is put back in chains. He knows that this is what God wants, what the church wants, and what America wants.

I about made up my mind to pray; and see if I couldn’t try to quit being the kind of a boy I was, and be better. So I kneeled down. But the words wouldn’t come. Why wouldn’t they? It warn’t no use to try and hide it from Him. Nor from me, neither. I knowed very well why they wouldn’t come. It was because my heart warn’t right; it was because I warn’t square; it was because I was playing double. I was letting on to give up sin, but away inside of me I was holding on to the biggest one of all. I was trying to make my mouth say I would do the right thing and the clean thing, and go and write to that n—r’s owner and tell where he was; but deep down in me I knowed it was a lie — and He knowed it. You can’t pray a lie — I found that out.

Miss Watson your runaway n—r Jim is down here two mile below Pikesville and Mr. Phelps has got him and he will give him up for the reward if you send. HUCK FINN

Peace, Be Still (Part 1 of 3)
Up until this point, Jesus was an exorcist or healer in stories...
view all Progressive Christian blogs
What Are Your Thoughts?leave a comment
Copyright 2008-2021, Patheos. All rights reserved.