Christianity Today Gets Off the Sidelines

This was urgently necessary, but still not something I expected: “Trump Should Be Removed from Office” a Christianity Today editorial written by the magazine’s editor in chief, Mark Galli. 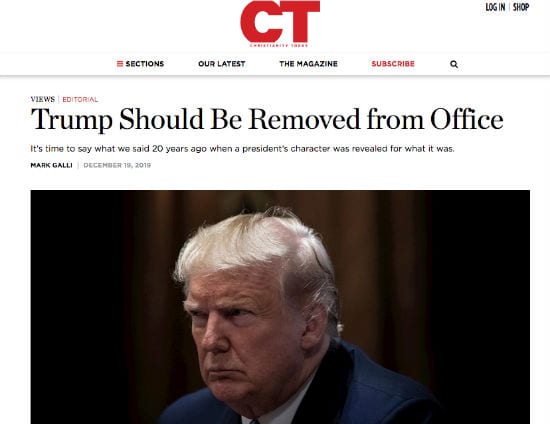 This part is particularly astute:

The facts in this instance are unambiguous: The president of the United States attempted to use his political power to coerce a foreign leader to harass and discredit one of the president’s political opponents. That is not only a violation of the Constitution; more importantly, it is profoundly immoral.

The reason many are not shocked about this is that this president has dumbed down the idea of morality in his administration. He has hired and fired a number of people who are now convicted criminals. He himself has admitted to immoral actions in business and his relationship with women, about which he remains proud. His Twitter feed alone—with its habitual string of mischaracterizations, lies, and slanders—is a near perfect example of a human being who is morally lost and confused.

Sarah Pulliam Bailey writes up the editorial for The Washington Post, “Christianity Today, an influential evangelical magazine, says President Trump should be ‘removed from office’.” Bailey interviews Galli and CT’s new president, Timothy Dalrymple,* about the editorial and the decision to run it. Both men speak openly about their concerns with bucking 81 percent of their potential readership. This wasn’t something they enjoyed writing, and both admit that they put off publishing such a statement for as long as possible.

“I was hoping I wouldn’t have to do another editorial like this. I hate doing editorials like this,” [Galli] said. “People are going to say mean, nasty things and say how much they hate me or hate the magazine, and I don’t like that.”

He’s not wrong about that. People — devout, church-going white evangelicals — are “going to say mean, nasty things” about him following the publication of this editorial.

But what Galli really ought to have figured out years ago is this: People — devout, church-going white evangelicals — are always going to say mean, nasty things about him. That’s pretty much the structure of white evangelical polity. Ecclesiastical power in white evangelicalism comes from challenging the legitimacy of others. Those bidding for power by saying mean, nasty things about your orthodoxy or your sincerity or your devotion to “the authority of the scriptures” will never be satisfied by your demonstration of the most scrupulous orthodoxy, fervent sincerity, or rabid defense of biblical authority. You will never succeed in satisfying the “concerns” of those whose identity and paycheck depends on perpetually expressing such concerns.

Galli said he believes that many evangelical leaders have not been openly critical of the president because they have friends and family who support Trump.

I think that observation is accurate, but probably not as relevant as the fact that most evangelical leaders have donors who support Trump — and not just the man himself, but the whole fetid, authoritarian, lawless, blasphemously white nationalist stew of Trumpism.

For those of us for whom it’s merely a matter of “friends and family who support Trump,” most of us figured out back in the 2015 primaries that avoiding being openly critical was the worst possible response. That just reinforces the pretense of unanimity that allows their fantasy epistemology of alternative facts to continue unperturbed.

Put it that way and you’ll see that not speaking up so as not to offend these “friends and family” is even worse.

“I bend over backwards to be charitable and patient with people, including people who support Trump,” Galli told Bailey, conceding that “I probably went too far on that.”

Well, yes he did, and this passage from his editorial demonstrates why that happened:

When it comes to condemning the behavior of another, patient charity must come first. So we have done our best to give evangelical Trump supporters their due, to try to understand their point of view, to see the prudential nature of so many political decisions they have made regarding Mr. Trump.

Do you see who’s missing in that equation? When someone is stomping on another person’s neck, charity — and justice — for the stomp-ee must come before “patient charity” for the stomp-er. But the stomp-ees — the victims and targets of Trumpism, those actively and tangibly harmed by his policies and by his abuse of office — haven’t “come first” for CT. Instead, priority has been accorded to “evangelical Trump supporters” — to people complicit in and massively responsible for all of that harm.

Even here, in this welcome editorial, Trump’s complicit supporters receive far more attention than any consideration of what is due to their victims. No effort is made “to try to understand their point of view, to see the prudential nature of so many political decisions they have made regarding Mr. Trump.” Instead, Galli tells us, those victims: “have had it out for [Trump] from day one, and therefore nearly everything they do is under a cloud of partisan suspicion.”

As though Trump’s birtherism, his mobbed-up corruption, his libertine greed, his decades of racism and predatory misogyny weren’t allowed to be considered before “day one.” (Note to CT: If, say, Alex Jones or David Duke or the reanimated corpse of Nathan Bedford Forrest somehow gets elected to office, I will be among the millions who “have it out for them from day one.” And it might behoove you to try to understand why.)

But let’s not be overly critical. It took real courage for CT, Galli, and Dalrymple to take this stand rather than continuing to stand idly by. (“The typical CT approach is to stay above the fray,” is how Galli puts it, making bystanderism sound almost like something one should aspire to.)

Considering CT’s audience, its advertisers, its subscriber base, and all of its other sources of financial support, it’s impressive that they would publish something like this editorial.

And now, also, “most white evangelicals” will begin to view Christianity Today as apostate or, at best, “controversial.” It is, after all, the magazine started by Billy Graham, and the Billy-to-Franklin transformation of white evangelicalism makes that increasingly irrelevant to the hyperpartisan white nationalist faith of the Franklin-esque majority of white evangelicals.

It may be undeniable that Trump provides “a near perfect example of a human being who is morally lost and confused,” but so does Franklin Graham, and Jerry Falwell Jr., and Robert Jeffress, and The Liar Tony Perkins, and Paula White, and Mike Pence, and Sean Hannity, and Tucker Carlson, and every other “spiritual leader” that white evangelicals have turned to as they have turned away from the former “mainstream” of Christianity Today.

Still, though, it’s nice to see CT get off the sidelines and decide, at least, that it’s better to go down swinging.

John Fea, “Christianity Today: ‘Trump Should Be Removed from Office’”

* Yes, the same Timothy Dalrymple who used to oversee the “Evangelical Channel” here at Patheos, and whose oversight involved kicking me off of that channel and consequently helping to make the term “progressive Christian” a buzzword.

But I am too pleased by the appearance of this editorial to mention that here, or even to include the usual standard disclaimer — insisted upon by Mark Galli personally — that Christianity Today is a publication that believes gay and lesbian couples are “destructive to society.” And I won’t even mention how that disclaimer arose because CT was then, and always has been, neck-deep in the fray they insisted they were above, because staying “above the fray,” like every form of bystanderism, always involves choosing a side.