Okay, campers, rise and shine, and don’t forget your booties …

February 2 is the birthday of Graham Nash, Eva Cassidy, Burton Lane, and Shakira, all of whom have given us songs that I enjoy far more than Sonny & Cher’s recording of “I’ve Got You Babe.” But the song above is holiday music.

The Christian church marks this same cross-quarter day as Candlemas or the Feast of the Presentation. Candles are always welcome in winter, but I still find all of these liturgical attempts to sacralize February 2 kind of meh compared to the spiritual depth stumbled upon by Harold Ramis, Danny Rubin, and Bill Murray. I mean that sincerely and seriously. Groundhog Day is often characterized as Buddhist, but it’s also Aquinastotelian — virtue takes practice — and there’s something very “This is water” about it, something like that Merton epiphany going on too. As Roger Ebert put it, “There is a moment when Phil tells Rita, ‘When you stand in the snow, you look like an angel.’ The point is not that he has come to love Rita. It is that he has learned to see the angel.”

Frederick William Vanderbilt (1856) and Solomon R. Guggenheim (1861) were both born on February 2. Those names are a reminder that billionaires used to feel a defensive obligation to at least toss some crumbs to the rest of us in the form of museums and libraries. That was partly due to a mannered (and manored) sense of noblesse oblige, but it was also partly due to the realization that the people from whom great fortunes were taken might someday decide to take them back. There are a lot more billionaires today than there were back in the days of the Vanderbilts and Guggenheims, and today’s billionaires are not nearly scared enough.

James Joyce was born on February 2, which was also the date that Ulysses was first published. (I’ve read Dubliners and Portrait. I’ve started coming to peace with the realization that I’ll probably never read Ulysses, sorry.)

Today is Tommy Smothers’ 83rd birthday. He did some smart comedy by playing dumb, saying things like “When you don’t know what you’re talking about, it’s hard to know when you’re finished.” He fought a two-year war with TV network censors that led to the abrupt cancellation of the Smothers Brothers Comedy Hour in 1969. Also, in retrospect, his long feud with Bill Cosby now seems like a badge of honor.

John (or Jan) of Leiden was born on February 2, 1509. About 25 years later he became King of New Jerusalem. His reign did not go well, nor last very long. “New Jerusalem” was actually Münster, Germany, which John had helped briefly transform into a theocratic communist utopia, a sovereign city-state that banned all money, private property, and Catholics. John’s reign as “king” lasted less than a year, all of it under siege from the army of a German prince-bishop (which was a thing). The siege ended very, very badly for John and the other leaders of the Münster Rebellion. They were publicly tortured to death and their rotting corpses were suspended in iron cages hung from the steeple of St. Lambert’s church for the next 50 years.

Most of what we know about John and whatever transpired in Münster is unreliable, the sort of history written by the victors who were, in this case, the sort of victors who enjoyed going to church every Sunday by walking beneath cages bearing the rotting remains of people they had tortured to death. So it’s hard to know what to make of accounts of John’s millennial madness, mandatory polygamy and mass executions during his reign. But St. Lambert’s church is still there. And so are the iron cages hanging from the steeple.

I like to imagine a church-growth consultant working with St. Lambert’s. “The website looks good. Thanks for incorporating the seeker-friendly language we recommended there. But about those iron cages above the entrance …”

The Treaty of Guadalupe Hidalgo was signed on February 2, 1848. This is one of many, many reasons that people who say, “This is America, speak English” are ignorant jerks. 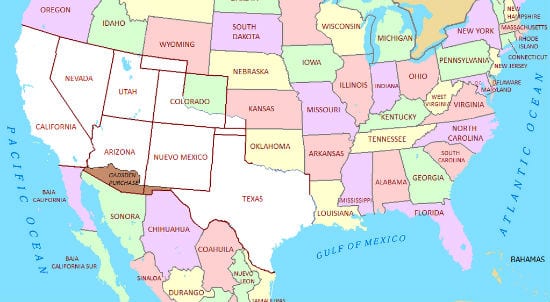 February 1, 2020
There's no such thing as someone else's war
Next Post