I believe in UFOs

The UFO videos released by the Pentagon this week were the same ones published a few years ago by The New Y0rk Times, which was following up on reporting by the guy from Blink-182 (yes, really).

In a sense then, this week’s UFO story isn’t new news. We’ve seen these videos before. (“We” here being the general public, those of us who are neither government officials nor dedicated UFO researchers and enthusiasts.) But the official release and confirmation of those videos by the Pentagon is news. And I think it’s probably Good News.

Every third post on social media about this story suggested otherwise, framing this statement from the Defense Department as a nefarious attempt to distract or mislead the public. No two posts wholly agreed on just what it was we were being distracted from, mind you, but I appreciate the general wisdom of reflexively distrusting everything we hear from the Pentagon. It may turn out to be that this official confirmation of previously leaked videos was planned or timed to conceal something else entirely, but it may also be the rare example of the kind of candid disclosure we deserve to see more of from a “national defense” system that often otherwise seems more interested in defending itself from the nation finding out what it’s doing in the name of national defense. 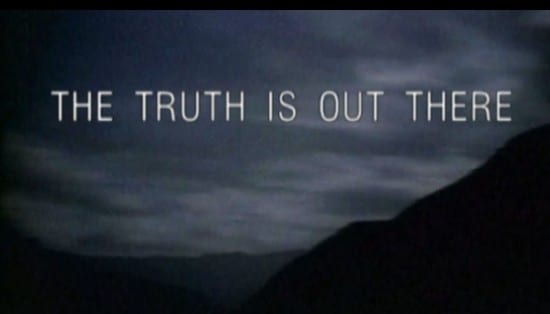 There’s a lot of bureaucratic lingo and gobbledygook in the Pentagon’s public statements about these videos, and we can certainly complain about it taking them almost three years to officially acknowledge them, but overall, what the Defense Department told us this week seemed like an honest summary of where these videos come from and what they show: “unidentified aerial phenomena.”

That three-year delay actually makes the Pentagon’s statements more revealing. The military is saying that, yeah, we’ve been studying these videos for three years and we still have no idea what it is they show: “After a thorough review, the department has determined that the authorized release of these unclassified videos does not reveal any sensitive capabilities or systems, and does not impinge on any subsequent investigations of military air space incursions by unidentified aerial phenomena,” a spokesperson said.

Or, in other words, this ain’t one of ours and we’re pretty sure it ain’t one of theirs (the Russians, the Chinese, the Wakandans), but beyond that we don’t know what it is. The official position of Defense Department officials is, after years of “review,” nothing more than the initial real-time, understandably profane reactions of the Navy pilots who recorded these videos: “What the f–k is that?”

“Unidentified aerial phenomena” is a clunkier variation on the older phrase “unidentified flying object.” The change in language, I think, is an attempt to avoid the ’50s drive-in movie cultural connotations that have attached themselves to the once denotatively modest classification UFO. The new term retains and reaffirms the most important word here: unidentified.

The meaning of that word has gotten obliterated by everything that generally floods our minds when we hear the term “UFO.” All those other ideas — flying saucers, Roswell tourist traps, The X-Files, War of the Worlds, Close Encounters, Colleen Rafferty — suggest that these flying objects or aerial phenomenon have been identified, that they have been very specifically identified.

This is the weird thing about “UFOs” and “believing in” UFOs. If someone asks you if you “believe in UFOs,” what they almost always mean, instead, is if you regard all such unidentified aerial phenomena as wholly identified and explained. They are not asking if you think we have seen things we cannot explain, but if you personally agree with their particular conclusions about the identification and explanation of the kinds of things we see in those belatedly confirmed Navy videos.

I wrote about this a few years back in terms of The X-Files while reviewing a Christianity Today writer’s book on miracles:

If you’re not familiar with Chris Carter’s wonderful 1990s TV show, it follows the adventures of two FBI agents who are tasked with investigating unexplained phenomena. Agent Scully, played by Gillian Anderson, is the one who believes in UFOs.

Many people get that backwards. Since Scully is the skeptical scientist and Mulder the idealistic true believer, they mistakenly think Mulder believes in UFOs. He doesn’t. Mulder can’t abide allowing flying objects to remain unidentified. He doesn’t believe in UFOs, he believes in alien spacecraft.

This is true of most of the alleged experts on UFOs or on the “mysteries of the unexplained.” You’ll find many such experts in supermarket tabloids or on the wide array of tabloid TV shows now boosting the ratings and destroying the credibility of purportedly educational cable channels. The experts are brought on to discuss some “unexplained phenomena” and within seconds they explain it. Eyewitnesses attest to strange lights in the sky and the alleged “ufologist” quickly declares, with utmost confidence, that these flying objects can be identified. He proceeds to identify them with great precision, expressing certainty as to what they are, what they mean, and even the planet of origin of their supposed pilots.

Like these “experts,” Agent Mulder allows no room for the possibility of unidentified flying objects or for unexplained phenomena. His partner, Scully, might often be at a loss for an explanation, but Mulder never is.

Those categories — “unidentified” and “unexplained” — are necessary categories for us humans. And they are necessarily large categories. The Navy pilot’s question — “What … is that?” — is one we’re all forced not just to ask, but to live with, resisting the comforting urge to rush to an answer even when we don’t have one.

Like Chris Carter, I can’t help but also think of theology when I think about UFOs. These are, after all, related questions about what truth is out there, and about whether or not we are alone. And they’re both fields that tend to be dominated by enthusiasts and true believers who can’t abide the necessary categories of “unidentified” or “unexplained.”

All of which is to say that I believe in UFOs, by which I mean that I acknowledge that we have seen things that we have not identified and cannot (yet) identify. I think the question of that Navy pilot, complete with its emphatic expletive, is something like the beginning of wisdom. Or, in terms of Blaise Pascal’s somewhat-longer description of that same idea, that this is our wisest starting point:

This is our true state; this is what renders us incapable both of certain knowledge and of absolute ignorance. We sail on a vast expanse, ever uncertain, ever drifting, hurried from one to the other goal. If we think to attach ourselves firmly to any point, it totters and fails us; if we follow, it eludes our grasp, and flies us, vanishing for ever. Nothing stays for us. This is our natural condition, yet always the most contrary to our inclination; we burn with desire to find a steadfast place and an ultimate fixed basis whereon we may build a tower to reach the infinite. But our whole foundation breaks up, and earth opens to the abysses.

We may not then look for certainty or stability. Our reason is always deceived by changing shows, nothing can fix the finite between the two infinites, which at once enclose and fly from it.