Let’s go to the videotape. This goes back before my living memory, to several years before either I or David French was born. The religious right as we currently know it hadn’t been born yet either, since this video is from the summer of 1963, when Jerry Falwell was still just 30 years old, Sam Alito was barely a teenager, and The Liar Tony Perkins was still an infant.

Specifically, this video is from September 15, 1963, just after the bombing of the 16th Street Baptist Church in Birmingham, Alabama, which killed four young girls attending Sunday school. It’s a special edition of “Our Protestant Heritage” — a public television program produced by the Protestant Council of the City of New York. The host is Dr. Thomas C. Kilgore Jr., a black Baptist pastor and local civil rights leader. The guests are the Protestant theologian Reinhold Niebuhr and the writer James Baldwin.

I can’t get the video to embed here, but click over to this page from the Presbyterian Historical Society — “The meaning of the Birmingham tragedy, 1963” — and watch the whole thing.

Baldwin and Niebuhr, as this video demonstrates, were exceptionally clear-sighted, insightful, thoughtful people. And, yes, they were ahead of the curve in understanding and articulating the great moral crisis that America was forced to confront during the period we now call the Civil Rights Movement. But over the years to follow, the vast majority of Americans came to understand that moral crisis — that moral test and moral crucible — in precisely the same way that Baldwin and Niebuhr describe it here. Almost everyone came, eventually, to understand the monumental stakes of that crisis, even if most of those people couldn’t do so with the comprehensive framework of Reinhold Niebuhr or the stark clarity and precision of James Baldwin.

In describing that irresponsibility and complicity, Niebuhr makes an analogy to findings conducted by the American War Department following the defeat of Nazi Germany. In surveys seeking to measure the prevalence of Nazi and anti-Nazi sentiment among the German population (a perhaps dubious method of measuring that), they had found only 5% of Germans to have been actively supportive of Nazi ideology and even fewer — only 2% — to have been actively opposed to it. That left the overwhelming majority of the population as irresponsible bystanders.

We cannot describe them as innocent bystanders. The whole thrust of Niebuhr’s ethics is responsibility, and that doesn’t allow for any such category as “innocent” bystanders. And no living person in 1963 would have been so foolish as to try to tell James Baldwin that bystanders might be, in any way, “innocent.”

This is the context that David French fails to comprehend in his defensive rejection of “argument that, actually, racism taints the rise of the religious right.” He perceives this as the accusation that white evangelicalism and the religious right it transformed itself into is primarily driven by a pro-racist agenda — that it is analogous to that monstrous 5% of actively pro-Nazi Germans.

Or, a few years later, and in our lifetimes (from when David French and I were kids), these people: 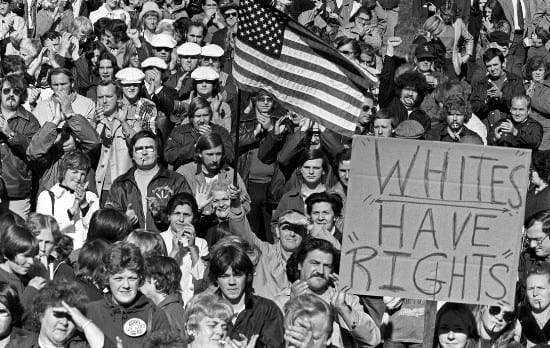 So for now, let’s set aside the multiple examples of religious right leaders with a clear-as-day personal history of personally racist attitudes and actions (there’s a reason I specifically mention Jerry Falwell, Shelby County Alito, and TLTP above). Let’s instead focus on that bystanding majority. This is the best possible scenario for French — the rosiest, most generously charitable spin we can put on the situation. 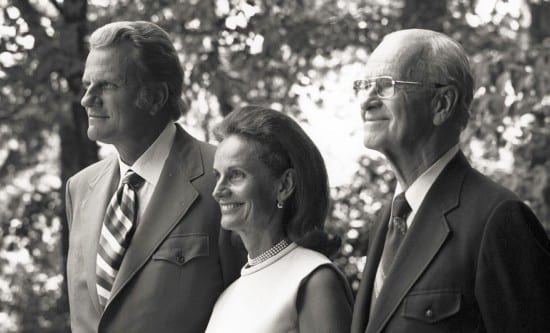 White evangelicals were not unique in this regard. White mainline Protestants and white Catholics also overwhelmingly failed that same moral test. So did the vast majority of post-Christian secular white Americans. But for white evangelicals, this collapse of moral authority was especially traumatic because it shattered white evangelicals’ sense of identity.

If we are not moral exemplars and moral leaders, then who are we? What are we? Our entire concept of meaning and self and purpose and identity is tied up as being the defenders of biblical truth and righteousness. The moral high ground was supposed to be our ground. We were meant to be the guardians and arbiters of morality and of values.

The Civil Rights Movement, among other things, left white evangelicals incapable of credibly claiming that identity. It left us exposed as — at the very best — irrelevant, irresponsible moral bystanders.

I don’t think it’s possible to overstate the trauma of that for white evangelicals. It was utterly confounding and intolerable. Here’s how I tried to describe this a few years ago:

In the 1970s, white evangelicalism was mired in the disgrace of having been epically, utterly, spectacularly wrong about the Civil Rights movement. They hadn’t just picked the wrong side in a political battle. It was far worse than that. By defending injustice, they had disgraced themselves, surrendered all claims of moral competence, and become disgraced pariahs.

This was unsettling. These were people who thought of themselves as the standard-bearers of morality and rectitude. They read their Bibles and held forth on what those Bibles mean and how others should read them too. They didn’t drink or dance or cuss or go to the movies. They expected other people to honor them as the arbiters and exemplars of morality and “godly” living. But now those others were looking down on them — appalled by their utter lack of morality and decency because they had failed the biggest, clearest and most obvious moral test of their time. They had no excuse, no answer, no recourse.

For several years, they flailed about, bewildered. White evangelicals had grown so accustomed to assuming their role as the spokespeople for morality that they weren’t quite able to understand how thoroughly they had surrendered any claim to that role.

That desperate flailing for some kind of moral traction is, again, something that I lived through and can remember even without the aid of a Dartmouth historian. White evangelicals grasped for anything that might help us regain some semblance of the moral superiority and moral leadership on which our entire identity (and eternal fate!) was premised. We doubled-down on Cold War anti-communism and Rizzo-esque “law and order” politics but these transparent proxies for anti-Civil Rights Movement politics only deepened our complicity in the initial failure and thereby compounded our anxiety. We threw dozens of Comstockian proposals at the wall in the hopes that one might stick — prayer in schools, anti-evolutionism, anti-MTV, hand-wringing about the sale of Playboys at 7-Eleven. None of these worked to convince others of our moral superiority. None of them quite helped to convince ourselves of it either.

And so, ultimately, we settled on the ancient solution that every group settles on when forced to confront the unconfrontable, unsurvivable chasm between a self-righteous self-concept and the reality of our own moral inadequacy. No, not repentance, restitution, and reconciliation. Don’t be silly. That’s always an available option for groups undergoing such identity-threatening trauma, and it’s always the only option that can end and heal that trauma. But repentance is effortful and unpleasant, and so almost no one ever chooses that path.

No, I mean the ancient custom that allows one to live with oneself without ever needing to repent by pretending to reclaim the highest of moral high grounds without having to change in any way: Satanic baby-killers.

Sure, Satanic baby-killerism is still as toxic and soul-killing and delusional as it was in Norwich and Salem. But it still sort of works — reassuring us that we’re Better Than the Very Worst and that therefore, by the transitive property of superlatives, we must be the Very Best.

And that is where we are today. There is no longer any such thing as a “religious right” that can in any way be meaningfully distinguished from the rest of white evangelical Christianity, doctrine, practice, piety, theology, etc. It all flows from the now paramount doctrine of Satanic baby-killerism.

That doctrine is not in itself explicitly an expression of racism. It is, rather, white Christianity’s mechanism for never having to deal with or to think about racism in any way that might endanger our sense of identity as the exemplars and arbiters of morality. The underlying original sin of white supremacy remains, unthreatened and imperturbed. The added layer of sin — the dishonest and cruelly harmful superstition of Satanic baby-killerism — is the thing that ensures we will never need to acknowledge and will never repent from that original sin.

French’s rejection of the idea that “racism taints the rise of the religious right” demonstrates the way this mechanism functions. Butofcourseyesfine, he says, we all witnessed the moral crucible of the Civil Rights Movement and we all witnessed the undeniably colossal moral failure it exposed. And yesofcourse as a consequence of that we all now agree — nominally, at least — that “racism” is a Bad Thing. But, hey, you know who the real racists are? It’s not us. It couldn’t possibly be us. It’s them. The Satanic baby-killers.