Jesse Gemstone and the Power Team

“It’s hard to be shocked by stuff that you long ago forgot isn’t general public knowledge,” Maggie Koerth wrote a few years ago. Koerth is a top-notch science writer, but she’s also someone who grew up attending white fundamentalist private schools, and so, she wrote:

I usually take a fairly blasé attitude towards the “OMG LOOK WHAT THE FUNDIES TEACH KIDS” sort of expose that pops up occasionally on the internet. … You say A Beka and Bob Jones University Press are still freaked about Communism, take big detours into slavery/KKK apologetics, and claim the Depression was mostly just propaganda? Yeah, they’ll do that. Oh, the Life Science textbook says humans and dinosaurs totally hung out and remains weirdly obsessed with bombardier beetles? What else is new?

I share Koerth’s fundie-education experience, so I also share this experience of forgetting sometimes that parts of that experience aren’t “general public knowledge” and tend to be — appropriately — shocking to others when they hear of it for the first time.

I wind up surprised that others are surprised by things that are not surprising to me, and then have to kind of force myself to remember that those others are correct and that, yes, it was weird that my high school science textbook included alleged photographs of the Loch Ness monster as evidence of the evolutionist conspiracy to suppress the truth about humans and dinosaurs co-existing before Noah’s flood.

Something similar to that is happening for me again now that my wife is watching The Righteous Gemstones, Danny McBride’s HBO comedy set in the world of mega-churches and televangelists.

Gemstones is often very Danny McBride. It includes big helpings of the loud, abrasive, over-the-top style of comedy he mined in his previous series, Vice Principals and Eastbound & Down. McBride has always found it funny — and made it funny — to portray awful people behaving awfully and allowing their unchecked id to run wild. Big chunks of Gemstones could be described as Vice Principals goes to church.

But Gemstones also includes lots of subtler, stiletto-sharp, finely observed satire based on precisely rendered details from the actual world of white American televangelism and mega-churches. The nature of that world, though, sometimes makes it hard to tell the difference between those two things. Some of what seems like broad-stroke, over-the-top exaggeration turns out to be, in fact, simply an accurate portrayal for others of things that those of us from that world “long ago forgot isn’t general public knowledge.”

You can get a sense of this from the very first scene of the first episode, which involves a 24-hour mass baptism service at a Chinese waterpark. The scene ends in slapstick when the wave pool gets turned on, but everything up to that point is cringingly plausible, right down to the music — “Awesome God,” in Chinese.* The precise aptness of the setting is just as funny as the sight of hundreds of white-robed converts getting tossed around in that wave pool.

Even when the Righteous Gemstones is at its loudest and McBrideyest — when the family’s brash decadence and corruption seems at its worst — I’m still not sure it gets anywhere close to the cartoonish reality of, say, Paul and Jan Crouch. 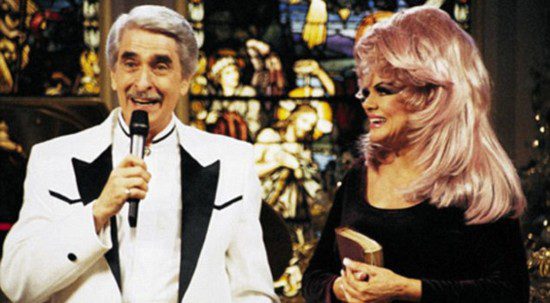 My wife was fortunate enough never to have heard of Paul and Jan Crouch. And when we hit pause on the Gemstones so I could show her a picture of them, she at first refused to believe they were real and not costumes from some old SNL sketch or Christopher Guest movie.

“No, really,” I said, “that’s real.” And that’s something I’ve had to say a bunch of times as she works her way through the Gemstones.

Such as, for instance, with the “God Squad,” the show’s only slightly askew version of the Power Team. Here, again, we’re hitting pause and looking at photos as I struggle to convince my raised-Catholic wife that the Power Team was really a real thing and she giggles in disbelief as I tell her about going to see them do their thing when I was in Christian Service Brigade, and then she cracks up even more because she finds every story about “fundamentalist Boy Scouts” hilarious, and I haven’t seen her laugh this hard or this long since she watched that episode of Vice Principals where Dr. Brown falls off the wagon.

The Power Team is definitely one of those things from 20th-century white evangelicalism that I sometimes forget are not general public knowledge and thus forget how bewilderingly strange they’ll appear to most people. Rick Paulas did a pretty good piece on them for Vice back in 2015, “The Power Team Was the Bloody, Evangelical Freakshow That Ruled the ’80s.” The term “Freakshow” seems harsh, but this was, after all, a strong-man act — an ’80s version of a carnival midway staple that predates Barnum. Paulas’ piece works as both a Where Are They Now? article for those of us who remembered the Power Team and as a “No, really, this was real” introduction to this slice of white evangelical history for the general public who never witnessed this spectacle back in the day.

The saga of the Power Team’s founder, John Jacobs, seems to have involved many Gemstones-like elements — adultery, bankruptcy — that are by now familiar parts of the rise-and-fall stories of popular evangelists. But also, to be fair, it shouldn’t be surprising that the rest of the team isn’t still out there breaking bricks, bending iron bars, and ripping phone books in half. Nobody should be doing that when they’re pushing 60. (And where would you even find a phone book nowadays?)

Consider another example: the scene in Righteous Gemstones where innocent volunteers from the church walk in on McBride’s Jesse Gemstone, who is wearing only a pair of boxers, and his mistress, who is wearing only a towel. Jesse fumbles to explain what they’re seeing by weaving a ridiculous, Jack-Tripper-esque lie about the two of them cooking chili for a church supper and then accidentally spilling it on their clothes.

That’s all a bit too broad and ridiculous and over-the-top, right?

Well, yes. But it’s not actually a scene from the Righteous Gemstones. It’s the lede to Emily Shugerman’s actual news report from Chattanooga, “Hipster Megachurch in Shambles Over Pastor’s Alleged Affair“:

When volunteers at Venue Church in Chattanooga, Tennessee, arrived at their pastor’s house last November, they were hoping to raise his spirits with a surprise visit. Instead they got a shock: Pastor Tavner Smith was alone with a female church employee — she in a towel, he in his boxers.

The charismatic 41-year-old hurriedly explained that the two of them had been making chili and hot dogs and gotten food on their clothes, according to one volunteer who was present. But, as the volunteer put it, “I don’t think none of us was that dumb.”

“If she dropped chili on her clothes, why are you in your boxers?” she recalled thinking. “Was y’all like, throwing chili at each other?”

For the volunteer, the scene confirmed something she had long suspected — that Smith, then married with three children, was secretly carrying on an affair with the employee, who was married to another church staffer. Smith has denied any affair took place, but rumors about it have nonetheless led to something out of a daytime soap opera, involving two divorces, one secretly recorded video, and the departure of nearly all the church’s full-time staff.

You can try to do a broad, over-the-top satire of the world of mega-churches and televangelists, but it ain’t easy.

* Rich Mullins sometimes seemed to apologize for having written that song, but I think he would have loved this scene. And I love the idea that whatever HBO is paying for the music rights there may be going to fund music education in the Navajo Nation.