Another feather in your lap

• “Janet Folger Porter, a radical anti-choice, anti-LGBTQ, religious-right conspiracy theorist, has announced that she is running for Congress in her home state of Ohio.” The whackadoodle self-proclaimed “prophet” is a long-shot candidate, even in a deep white district, but if she gets elected, she’ll make Marjorie Taylor Greene look statesmanlike. The good news is that campaigning for office will at least prevent Porter from filming any more movies or sit-com pilots.

• The title of this post comes from a hilariously inept recent round of the game show Wheel of Fortune. This is, after all, the purpose and function of Wheel of Fortune — to restore our self-confidence and self-esteem after the questions and contestants on Jeopardy! have made us feel dumb.

The Boeskool recently taught me something I did not know about Wheel of Fortune: longtime host Pat Sajak serves as chairman of the board at the right-wing white/Christian nationalist stupid factory known as Hillsdale College:

If you’re anything like me, you probably don’t know much about Hillsdale College. So I looked into it, and it is shady and creepy and white AF. Of the 23 members of their Board of Trustees, 21 are white men and 2 are white women. Turns out the Chairman of the Board is Pat Sajak (yes, that Pat Sajak), who is so white he should count as 3 white people. I tried to look up the racial demographic information for HC, but you can’t find that information anywhere. So I called the school and told them that I had a daughter who was looking at colleges (true), and she wanted to attend a school with a diverse student body (also true), and I was wondering about the racial makeup of the college (again, true). I was told that because they don’t accept government money, they “don’t have to divulge that information” (“Don’t have to divulge that information” is another way of saying “We are like a polar bear in a snowstorm”), which is clearly the case here, as you can see by this photo of Hillsdale’s football team: 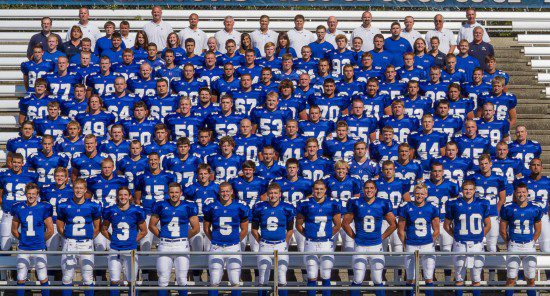 • “Evangelical Christian Credit Union rebrands to AdelFi.” This was notable to me personally since for most of the 1990s my paycheck came via ECCU.

“AdelFi was founded in 1964, originally as the Conservative Baptist Credit Union, which merged in 1984 with the Association of Christian Schools International Credit Union.” In 1984, the credit union’s new name seemed broader and more inclusive than “Conservative Baptist.” But today, in 2022, broad and inclusive aren’t attributes most people associate with the words “Evangelical Christian.” Nor is that any longer a name most people would trust to handle their money.

Not sure “AdelFi” is much of an improvement — it makes me think of corrupt Nevada billionaires. But this “rebranding” is another indicator of how toxic and repugnant to outsiders the label “evangelical” has become.

• This sleazy, non-sequitur, question-begging headline is indefensible: “Record numbers of Americans identify as LGBTQ. What does that mean for Christianity?”

“Record numbers of Christians identify as uncircumcised. What does that mean for the church in Galatia?” Somebody asked the Apostle Paul that once. Once.

• Since I recently wrote about the explicitly segregationist articles published by Christianity Today during the 1950s and ’60s, I should also note this article — mentioned by Jesse Curtis over at the Anxious Bench — written by Clarence Hilliard and published by CT in 1976, “Down with the Honky Christ—Up with the Funky Jesus.”

Those segregationist articles, I noted, are available in CT’s online archives without any additional commentary, context, or qualification. The same is true of Hilliard’s piece and of its original subhed (!). I’m going to need to hit the physical library at some point to look up the letters to the editor and get a sense of how persuasive Hilliard’s case for a Black Christ was for the magazine’s readers.

• More recently, CT has also been publishing things like this piece by Daniel Silliman on white evangelicals in Richmond: “The Confederate Statues Are Gone. The Work of Repentance Continues.” The piece is saturated in the fruitless language of “racial reconciliation” (both sides must repent and meet in the middle?) and it only subtly challenges the exculpatory personal-sin/personal-sentiment framework, but it’s still a hopeful sign — both the substance of the story itself and the fact of its publication.

• They are coming for your birth control: “Republican AG candidates criticize 1965 ruling against contraceptive ban.” That’s all three of the Republicans seeking their party’s nomination to be Michigan’s next attorney general telling us that they think Griswold v. Connecticut was wrongly decided.

They’re not just coming for your birth control, they’re campaigning on it.

White evangelicals are out here radically transforming their own theology in real time and pretending even to themselves that they’re not doing it.