Twenty years is, like, six generations in internet time.

Dames then continues for 4,000+ words examining very nearly “every single aspect” of Madonna’s career in search of the signs — subtle and oracular though they may be — that support the thesis that the pop star is a key player in the Illuminati’s plans for the End Times. It’s very thorough. It’s very sincere. And it’s utterly, fantastically, dizzyingly bonkers.

It’s so loopy that I’m unable to articulate my response into a coherent whole. Here then are some staggered thoughts.

1. I believe that Stacey Dames believes what she has written. Or, more precisely, I believe that she so fully wants and needs to believe it that she has forgotten that not believing it is an option. But I cannot believe that the editors of the Christian Post believe it. This particular form of wackiness is too idiosyncratic to be persuasive to those not wrapped up in the specific variety of wacky that Dames is trapped in. The folks running the Christian Post have to know she’s nutty. I suspect they know and simply do not care. This is further evidence that they’re running a cynical, disingenuous con game. They don’t publish articles because they believe them to be true or because they believe them to be necessary, helpful or “edifying” (to use a favorite evangelical word). They publish articles because gullible people will read them and the Christian Post can profit from ad sales. 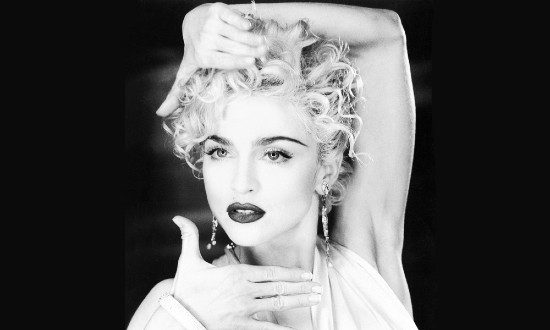 2. Dames perceives herself as an orthodox, mainstream Christian. Readers of this post are presumed to know and to share all of her assumptions about the existence and intent of the Illuminati. This is, to Dames, an essential and central aspect of Christianity — so much so that she sees no need to explain any of her references to this diabolical global conspiracy of occultists plotting to bring about the reign of the Antichrist. That is something she just assumes every Christian knows as though it were outlined in the Apostle’s Creed. Dames’ urgent need to share her expertise isn’t about warning other Christians of this conspiracy or of the “fact” that we are living in Darby’s End Times. In her view, knowing such things is not a matter of expertise, simply of basic, normal Christianity. She has, in other words, been the victim of pastoral malpractice. To use another favorite evangelical phrase, she has been “led astray.”

3. Dames knows her Madonna. This is the expertise she brings to this post. It’s a comprehensive, intimate familiarity with the artist’s entire catalog. She begins by telling us: “Before I was saved by the Lord, I used to be a HUGE Madonna fan. Obsession probably doesn’t begin to describe it. I even had collectibles worth a decent amount that I destroyed after I was pulled from the wreckage by my Lord and Savior Jesus Christ.”

The exhaustive survey of Maddona’s career that follows proves she’s not exaggerating there. Stacey Dames was a fan. She loved Madonna’s music and found joy in it. And now that joy has been taken away from her, twisted into a source of guilt and shame. This again is pastoral malpractice. Turning legitimate pleasure into shame is a form of abuse. What some warped pastor did to Dames’ love of Madonna is a sin.

4. Madonna earned the admiration Dames once had for her. The lady is a pop mega-star for a reason. She deserves to have fans and the fans that she has are rewarded. I’m not one of those fans, and I’m not saying she’s Mozart or Picasso, but if you like danceable pop music, she’s a hero. She’s a better-than-average songwriter, a skilled dancer, and a singer who knows what it is she can do with a song. Her real genius as an artist — and here I do mean genius — isn’t so much her music itself as all the trappings that surround it. And I don’t just mean her genius for grabbing attention or for reinventing herself to match the moment in pop culture. Fashion, choreography and music video are all legitimate art forms and Madonna has helped all of those art forms to advance. It wasn’t wrong for Dames to have admired Madonna for all of that. It was wrong for someone to have convinced her not to.

5. Madonna isn’t a threat. Like The Simpsons, Madonna made headlines and was subject to boycotts in the 1980s because of a backlash against her cheeky irreverence. And, as with The Simpsons, that backlash eventually subsided once people paid enough attention to look past the surface at the underlying message, which was actually innocent, positive and optimistic. The message of most of Madonna’s biggest hits is indistinguishable from that of most wholesome G-rate children’s movies: You’re special, follow your dreams, look past appearances, “Open Your Heart,” “Express Yourself.”

If you want to understand the contemporary Comstocks, consider their opposite reactions to Madonna’s videos for “Material Girl” and for “Like a Prayer.” Not a peep about the first — a satire that they approved of because they didn’t perceive it as satire. But the second led to an uproar and a boycott. Praise of “cold hard cash” is fine. A story in which a black man falsely accused of sexual assault is portrayed as a holy saint before being freed from jail — that was perceived as wholly unacceptable.

6. Dames’ post refutes the idea of sensible centrism. Those who promote the Golden Meh — condemning partisanship and assuring us that the truth can always reliably be found somewhere in the moderate middle — are always urging us to seek common ground and to compromise. OK, what would that mean here?

Stacey Dames posits that a global conspiracy of Jewish occultists, liberals and secular humanists a plotting to bring about the reign of the Antichrist and that Madge is somehow playing a vital role in this satanic plot. It doesn’t seem that this view would allow Dames to meet the rest of us half way. But what would it entail for the rest of us to “compromise” or find “common ground” with this idea? Dames’ thesis is full-gonzo loony — should we all become half-gonzo loony in an effort to find common ground?

7. Illuminati, Madonna, abortion, gays — it’s all the same. The real core of Dames’ message here is indistinguishable from the anti-abortion and anti-gay articles that make up the bulk of the content on the Christian Post. She creates her own entry point into the culture war, but every culture-war argument requires this same conspiratorial mind-set, this same belief in a nefarious, global, coordinated assault by secretive, evil, Satanic baby-killers. Nothing Dames says here isn’t also being said by Charles Colson and Rick Santorum: Be afraid; they are evil; they are everywhere; they are after your children; and it’s them against us.

Dames’ particularly loopy variation of this theme just illustrates that the alleged proximate subject of all such arguments doesn’t ever matter much. For Dames, as for all culture warriors, facts are pliable things. Reality is a pretext, not something objective to be learned about and studied. Reality is a blank screen onto which to project titillating nightmares as a context for imagining heroic fantasies. The particular form of the monsters in that nightmare doesn’t matter — bogeymen, goblins, ghosts, vampires, gays, abortionists, pop singers. All that matters is that they are evil, and therefore we are good. They are attacking, and therefore we must defend. They are everywhere, and therefore we must not trust anyone or anything.

Alas, at some point in the last 10 years, linkrot claimed the original Christian Post version of Dames’ epic rant, but most of it was preserved at this now-defunct like-minded blog.