For 20 years now, this blog has maintained the distinction between a “blog” and a “post.”

Jason was a couple of years behind me at Timothy Christian, and like many kids who went to that private, fundamentalist school, he wasn’t allowed to listen to what we called “secular music.”

Of course, like most of the kids faced with this prohibition, Jason went to great lengths to listen to the forbidden music on the sly. He had a secret hiding place under a floorboard in his closet where he stashed a walkman and his contraband cassettes. 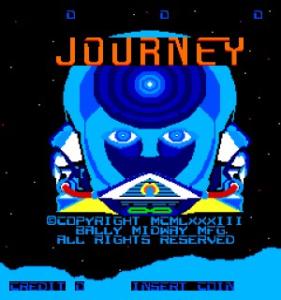 Yes, just like Lane Kim on Gilmore Girls. Except Lane had much, much better taste in forbidden music.

The reason I remember Jason in particular is that he got caught. His mom found his stash and he got grounded for a month. That much wasn’t unusual in a school full of teenagers with fundie parents, but we gave Jason a particularly hard time because of the particular cassette tape that got him in so much trouble: Journey’s Escape.

The mental image of poor Jay sneaking off with his walkman for a surreptitious hit of “Open Arms” was just too much. Even for a bunch of fundie kids inside our subcultural bubble, the idea of sappy power ballads as a form of teen rebellion seemed hilarious. Scott’s mom had confiscated his Suicidal Tendencies bootleg. Amy got grounded when her parents found the first Violent Femmes record in the sleeve for Amy Grant’s Age to Age. Those incidents enhanced their reputations. Getting busted for listening to the “Add It Up” or “Institutionalized” made you seem cooler. But Jason got busted for Journey, and that was just kind of sad.

Looking back, I understand what Jason’s parents were trying to do. I don’t mean that their musical censorship or the worldview that supported it was right, but I think that given their particular goals and aims, such censorship was a necessary attempt — albeit one that was doomed to fail.

If you want to control your teenager — if you want to protect him from the big, bad world and to ensure that he never strays from or escapes the sheltering bubble of your religious subculture, that he never encounters any thought or feeling or emotion too big to put into words, too alive to define and categorize and pin down on cardboard  — then you really do need to prevent him from listening to music.

Last year I was at a local place with live music featuring some smirking frat-punk cover band. The kids in the band probably weren’t born yet when Journey’s Frontiers first came out, but they decided to do “Faithfully.” It was meant to be ironic. Just like our picking on Jason years ago, the band’s rendition of this sappy power ballad was meant to be a dismissive, hipper-than-thou mockery of Steve Perry and the boys and of anyone who actually liked this stuff.

That’s how it started, anyway, and the young audience was playing along with the joke.

But try as they might, they couldn’t sustain it. By the time they reached the “whoa-oh-oh-oh” part, every trace of irony was gone. They weren’t mocking this cheesy song, they were embracing it, reveling in its earnest cheesiness.

Power ballads, it turns out, are called that for a reason.

The same thing happened later that evening when this same band condescended to offer a too-cool-for-school rendition of Bon Jovi’s “Livin’ on a Prayer.” The song certainly seems to deserve such treatment. It’s musically unimaginative and the lyrics are an insipid collection of cliches.

And yet Bon Jovi, too, proved immune to the chill of irony. The giggling crowd that sang along with the first verse was, by the end of the thing, completely into it. “Whoa, we’re half way there,” the singer belted, and then — as earnestly and guilelessly as the mulleted Bono playing live at Red Rocks — he thrust the microphone out over the heads of the audience and they all sang, “whoa-OH, livin’ on a prayer!”

And every single one of them meant it. Even if what it was they meant, specifically, was something they’d never be able to put into words.

Music can do this. Even cheesy power ballads. It can take you out of yourself. It can catch you up. It can make you lose your cool.

Music is not easily controlled or contained. Those who believe in controlling and containing every thought and every emotion — whether hipsters or fundies — would do best to avoid it altogether.