I realize such questions can seem like the old debates about how many angels could dance on the head of a pin, but from my own pinheaded perspective, I find such questions fascinating. 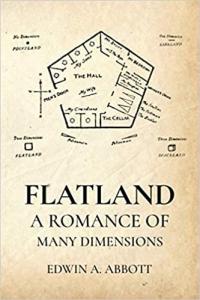 I also suspect they may be important — actually of practical, day-to-day usefulness. Because if time isn’t all there is, then we likely haven’t got a very good perspective for thinking about things like constancy and change, cause and effect, choice, consequence, prevention, preparation, prediction, predestination, foreknowledge, memory, repetition, remorse, growth, death and rebirth. None of those things could possibly appear the same if viewed from outside of time. None of those could possibly appear the same to one not bound, as we are, in time.

If I ran the zoo, the book I would add to orientation for every seminary would be Edwin Abbott’s odd little allegory, Flatland: A Romance of Many Dimensions.

It’s an enormously helpful book for those attempting to think about things we’re not quite capable of really comprehending. That makes it as appropriate for seminary as it is for classes in mathematics and physics. Abbott walks us right up to the edge of what we’re able to think about, then points off into the abyss. He helps to explain not just that we are unable to understand what’s going on out there beyond the edge, but why we are unable to understand it.

And that, I think, is a very helpful thing for those beginning their studies in seminary. If one begins studying theology without appreciating that the subject, by definition, includes much that one will be unable to understand, then one will wind up doing it wrong.

… One of the things I like most about Abbott’s “Romance of Many Dimensions” is the way he portrays anger as the consistent response to people confronted with the mind-blowing possibility of a world beyond their ken — whether it’s the dots of Lineland being confronted by the impossible thought of North and South, or the shapes of Flatland confronted by the impossible suggestion of Up and Down, or the previously affable Sphere losing his patience over the suggestion that they keep going past the third dimension to the fourth and fifth and beyond.

That anger, a product of fear and stubbornness and simple incomprehension, is precisely how we tend to respond to being confronted by the idea that reality is, in some ways, just too big for us to easily understand. In understanding that anger, Abbott forgives it, and in forgiving it, he helps us to get past it. And that, too, is a big part of why, if I were in charge, every student entering seminary would be required to read his book during orientation.

The alternative to that anger is humility. Here we are, finite, mortal creatures bound in time trying to speak with certainty about things that transcend our ability to grasp. Some of us are quite clever by the standards of finite, mortal, time-bound cleverness, but still reality is bigger than we are. We want to understand — and that’s good. But sometimes that desire to understand causes us to pretend that things transcending our understanding are actually quite simple — that they are just as finite and limited as we are ourselves.