The effort to delineate strict boundaries and to require unquestioning compliance with “the big four” (anti-abortion, anti-gay, anti-evolution, anti-environmentalist) only works because evangelicals seem to desire such boundaries. The tribal impulse is being manipulated by the fundraisers and vote-herders of the religious right, but it seems to have preceded them. So where does it come from?

I think it arises, in part, from salvation anxiety. 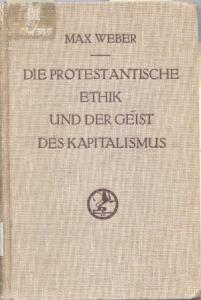 That’s a term sometimes used to describe what Max Weber wrote about in The Protestant Ethic and the Spirit of Capitalism. Reformed Protestantism, Weber said, offered believers no way of knowing for sure that they were among the elect, that they were truly saved, and no way of ensuring one’s place in God’s good graces: “There was not only no magical means of attaining the grace of God for those to whom God had decided to deny it, but no means whatever.”

Those who have ever been a part of the American evangelical subculture know all about salvation anxiety. It’s why churches have altar calls even when everyone sitting in the pews has already come forward several times in that very church. It’s why evangelical youths re-re-re-dedicate their lives to Christ every time they’re invited to do so. It’s why many of us early on mastered the multi-leveled self-awareness required to pray with utter sincerity while simultaneously gauging that sincerity in the hopes that it will seem sincerely sincere.

For those who don’t already know what this is like, start with the belief that most people will be damned to an eternity of conscious torment — that this is what “the gate is wide and the road is easy that leads to destruction, and there are many who take it” means. Now add that you yourself are powerless to determine or decide your own salvation — you are powerless to choose between that wide gate to destruction and the narrow path to salvation. You may think and want and hope and believe that you are among the elect few to be spared from “destruction,” but “Not everyone who says ‘Lord, Lord,’ will enter the kingdom of heaven.”

Whether or not you are among the very few who will be saved is entirely up to God and you cannot know, for sure, one way or the other.

Weber thought this was the source of an intolerable anxiety. Many evangelicals would agree.

Weber’s big idea was that this anxiety fueled what he called the “Protestant ethic” or “Protestant work ethic.” Since evidence of God’s eternal favor was not available or possible, he thought that Protestants sought or settled for the only evidence that was possible and available — the temporal evidence of material blessing. Work hard, practice thrift and find consolation that the prosperity it brings may be a sign that you really are among the elect.

Weber’s thesis has been critiqued and tweaked and questioned quite a bit over the past hundred years, but it remains a respected and fascinating theory. To whatever extent it once held true, however, I don’t think it has aged well during the past 40 years.

I’m not suggesting Weber’s thesis was flawed, but it no longer holds true because the Protestant ethic no longer offers any credible promise of material prosperity.

Since about 1970 in the U.S., wages have been stagnant (adjusting for inflation). Huge increases in productivity have not produced any corresponding increases in wages. What that means is there is no longer any meaningful cause-and-effect relationship, or even any meaningful correlation, between working harder and prospering more.

And what that means is that the single-minded devotion to work that Weber described no longer offers any reassurance that can help Protestants cope with the anxiety of uncertainty about their salvation. What Paul Krugman calls the Great Divergence — escalating economic inequality coupled with the divergence of productivity and wages — means that a Protestant ethic will only compound that salvation anxiety. Working harder and having nothing to show for it can appear to be evidence that you are not favored by God, thus heightening the fear that you are not among the elect.

So how, then, are Protestants to cope with salvation anxiety? For some, I think, the solution has been tribalism.

Tribalism allows you to know that you belong. It allows you to claim, with confidence, that you are among the righteous. It promises the assurance of salvation that Reformed Protestantism otherwise withholds.

Am I really, truly saved? I want to be, and I think I am, but how can I be certain? Reformed Protestantism says you can’t be.