In many times and in many places, Christians have faced persecution because of their faith.

The United States in the early 21st century is not such a time and place. Right now, as you read this, people are suffering imprisonment, disenfranchisement and physical harm because they are Christians. None of these people live in the United States.

The United States is a liberal democracy with a Constitution that guarantees freedom of conscience. This makes it a haven against religious persecution for people of all faiths and of no faith. Christians in America enjoy rights and legal protections that Christians in other parts of the world — China, North Korea, the Sudan — can only dream of.

The United States is also a country whose culture is shaped by the mores and conventions of its overwhelmingly Christian majority. This culture makes it not only acceptable, but often popular and advantageous for Christians to be outspoken and public with their professions of faith. By culture and convention, Christians in America enjoy privileges and power that their coreligionists in other countries could never dream of. When or where in history was it ever easier to profess Christianity in whatever form you might choose?

And yet scarcely a day goes by, regardless of whether or not it is “Justice Sunday,” in which some group of American Christians does not claim that they are facing “persecution.”

They dare to use that word.

When protected, privileged and pampered American Christians claim to be facing persecution they spit on the wounds of their brothers and sisters elsewhere in the world and in history who have known firsthand what religious persecution really is. They mock not only their fellow Christians in this great cloud of witnesses, but also those of other faiths who have suffered or are, now, today, suffering genuine persecution.

Such a person was recently interviewed on the PBS program “Now.” He described both the real, physical suffering he experienced and how his faith in God gave him the strength to endure it:

… Nightmares come, because I stayed five days without food or water, with torture. I always have this feeling, like conscious dreams. Sometimes these scenes appear in front of my eyes, even while I am not asleep.

I put my faith in God. Our strength and our resistance come from our faith in God, especially a person who considers himself not guilty and he is the object of abuse and punishment. There were others who couldn’t resist [the torture], and they gave up names of innocent people to trade for their release from prison. But God gave us the strength, and we believe in God. For a truly faithful man, God gives the person the great strength to be patient to endure the pain, abuse and insults that we were subjected to.

The man who described this persecution is named Haj Ali.

You may not recognize his name, but you’ve seen his picture. 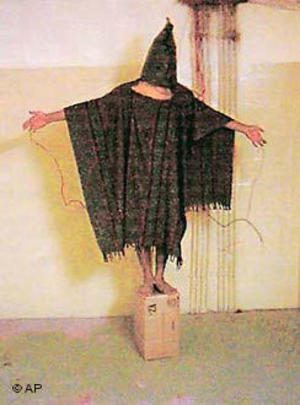 May 2, 2022 Hedging my bets at VBS
Recent Comments
0 | Leave a Comment
Browse Our Archives
Related posts from slacktivist