One of the friends I sometimes borrowed a car from during college had put one of those fish symbols on it. This made me uncomfortable and nervous whenever I drove that car.

I’m a relatively courteous and careful driver — for someone who grew up in Central Jersey, anyway. Driving in New Jersey is a Hobbesian war of all against all. Rush hour in Central Jersey is actually about 18 hours long and is governed by two apparently contradictory rules: 1) don’t worry, they’ll move; and 2) don’t worry, they’ll stop. One develops an instinctive tendency to close the gaps and get through the lights, and even those of us who are relatively courteous and careful can come across as a bit aggressive sometimes. 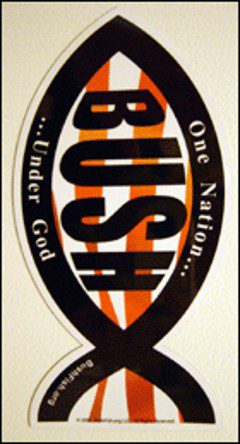 In my friend’s car, with that fish on it, I had to be extra careful to drive as considerately as possible. I didn’t want to cut anyone off, or to be perceived as cutting anyone off, because I didn’t want someone to feel like they had just gotten cut off by Jesus. I didn’t want someone to reject God, despairing that the universe was a cold, heartless, amoral and purposeless place just because I’m a Jersey driver. I didn’t want my savior to take the blame for my driving. (But of course even when driving as courteously as possible I was still driving a car — emitting noxious fumes from the tailpipe and burning fossil fuels secured by violence against humanity and creation.)

Anyway, that’s the main reason why I’ve never put one of those fish symbols on my own car.

Anecdotally, this is also the reason why I think most of the people who do have those fish probably shouldn’t. It seems to me that, more often than not, whenever you’re looking at one of those fish, you’re also looking at a lousy driver.

That’s probably not really the case. My perception of fish-drivers is probably biased by selective memory — the presence of the fish and its significance is more likely to register with me when its associated with bad driving than when its associated with normal driving. But recognizing that this is how selective memory works only strengthens the case against putting such Christian symbols on one’s car.

I was reminded of driving my friend’s old fish-car last fall, after putting a Joe Hoeffel for Senate sticker on my car. This again made me a self-consciously courteous driver — I didn’t want to cost Joe any votes with my driving.

But a campaign sticker is a very different thing from a fish symbol. A campaign sticker doesn’t carry the same implicit assertion of my own virtue. It simply indicates, “I’m voting for Joe and I think you should too,” which invites a very different response than a symbol which says, “I am a Good Person, most likely a Better Person Than You.” It’s that implicit claim of goodness that invites such a skeptical response to the fish symbol, triggering the selective mental cataloging of every driving blunder by fish cars. This may be why I’m more likely to have a preconceived, negative opinion about the relative driving skills of a fish-car driver than I am an opinion about someone with, say, a rainbow sticker or a sticker of Calvin peeing on something.

The popularity of the fish symbol is also related to the persecution complex we’ve been discussing here. The early Christians adapted the pagan fish symbol during the Roman persecution as a surreptitious way of identifying one another. It was, for them, not a flag on a marble arch, but a symbol furtively scratched in the dust, then hastily wiped away. That such a symbol is adopted and reinvented into a triumphalist emblem is further evidence of the weirdly contradictory, “persecuted hegemons” self-concept of many American evangelicals.

There’s a good summary of the history of the fish symbol at religioustolerance.org, in which they trace the symbol’s pre-Christian meaning.

The symbol, originally, was not a fish but rather, ahem, an image representing fertility. (The fact that it also resembled a fish was a very ancient and very, very dirty joke.) That history is strangely echoed in the “BushFish” from “BushFish.org: Supporting God and Country.”

This isn’t quite “the abomination that causes desolation, standing in the holy place” — but it’s close. …

Sadly, linkrot killed the nicely done Top 10 List of “Things People Won’t Say When They See a Fish on a Car.” The original link to the “BushFish.org” site is also defunct. There’s probably a TrumpFish site out there, somewhere, but life’s too short to go searching for something like that.

May 14, 2022 May 14 Flashback: Sinister
Recent Comments
0 | Leave a Comment
Browse Our Archives
Related posts from slacktivist