Everybody knows the story of David and Goliath from the Bible.

We know it from Sunday school, or from children’s story books, or from popular proverbs, paintings, or any of the many cinematic retellings and adaptations.

The Sunday school version of the story is never quite like the actual story in the text of the Bible. That actual text of the story doesn’t quite fit the purpose of such Sunday school lessons, in which stories from the Bible tend to be reduced to a simple, wholesome moral lesson for children. The story gets streamlined, simplified and embellished in the retelling in service of this moral lesson. 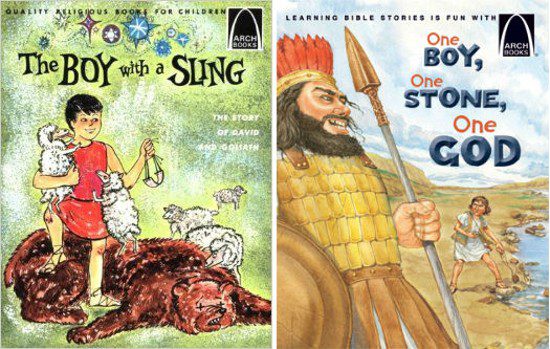 We first encounter the story in forms like that, absorbing it as a tale of the proverbial underdog triumphing over the odds with God’s help. That’s the story of David and Goliath that everybody knows.

Later, the few who ever get around to reading the actual story in the actual text of the Bible — in 1 Samuel 16-18 — tend to approach the text expecting to find this familiar story. The story we are expecting to find becomes the story we are looking for, and thus that is the story we imagine we encounter in the text. If we’re reading quickly or distractedly, the story we encounter in the text can almost seem to fit with that expectation. Almost. It’s close enough, anyway, to allow us to check off this chapter from our Through the Bible in a Year list, or to allow us to count our obligation of daily devotional quiet time as fulfilled.

If we read 1 Samuel 16-18 carefully and attentively, the text at first seems repetitive. It sets the scene and introduces the cast of characters twice. The repetition can lull us to sleep a bit, encouraging us to skim more than to pay close attention to the substance of what we’re reading. But if we let it jar us into re-reading the text more carefully, we notice that this text isn’t merely repetitive, but contradictory. It sets the scene and introduces the characters differently.

Even in our English translations, it’s pretty obvious that we’re not reading a single story in 1 Samuel, but rather, as Mits put it earlier in comments here, “two different origin stories … kind of glued together.”

Paul Davidson had a good overview discussion of this last summer in a post titled, “The Men Who Killed Goliath: Unraveling the Layers of Tradition behind a Timeless Tale of Heroism.” Davidson also helpfully separates out the two stories that 1 Samuel clumsily tries (and fails) to merge, reproducing them in parallel columns in an article bluntly titled, “The Two Stories of David and Goliath in 1 Samuel 16-18.”

This isn’t mere speculation from some pointy-headed ivory-tower liberal who’s trying to tear down the authority of the scripture as part of a liberal/secular conspiracy to destroy real, true Christianity. This is simply something we know to be true because people who love the Bible have studied the Bible. …