7/8 Flashback: Gettin’ caught in the rain

(There’s a follow-up story to this one. Scroll to the bottom for that. Oh, and thank you to everyone who’s contributed to the 20th-Blogiversary Fundraising Extravaganza(!) which, being an extravaganza, continues, extravagantly.)

There’s a lot to like in the 1970s channel they sometimes play at the Big Box. But then there’s also “Escape (The Piña Colada Song),” which I do not care for. At all. Not even Peter Quill can make me like this song. 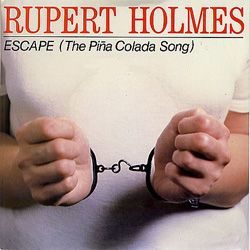 I sometimes wonder if being forced to listen to this song twice a night at work doesn’t violate some sort of OSHA regulation.

But I also have to admire Rupert Holmes’ craft and achievement in writing this song. He created two characters who produce a strong emotional response. They become like real people — real, and really awful, shallow, narcissistic, horrible people. When they are reunited by their mutual betrayal at the end of Holmes’ story-song it strikes me less as a happy ending than as a case of the punishment fitting the crime. These two awful people — the narrator and his “old lady” — deserve one another.

The story — if you are somehow blessedly unfamiliar with it — is like an uber-’70s inversion of O. Henry’s “The Gift of the Magi.” But where Henry’s tale is about selfless love, Holmes’ is about loveless selfishness.

This provides us with an excellent case study for all of those lit-crit questions about authorial intent. Would it change my appreciation/opinion of this song if I knew that Holmes’ shared my dislike for its protagonists? Should that influence my response? Does it matter to the song itself whether its composer approved or disapproved of these characters?

Consider the sheer cheese-factor of the music here. Is this a pitch-perfect satire of precisely the sort of music that someone like the song’s protagonist would listen to? Or is this arrangement just the result of Holmes composing this song in 1979? If the former, does that make it in any way more listenable?

I know very little else about Rupert Holmes. Do I need to study his larger body of work — from the 1971 Top-40 cannibalism hit “Timothy” to his Broadway work and Remember WENN — in order to properly interpret and understand “Escape”? Would I respond to this song differently if I learned it had been co-written by someone better known for irony and a satirical edge, like, say, Randy Newman or Warren Zevon? (I suspect Newman’s version of such a song might have done more to telegraph clear contempt for the narrator. Newman often wants us to watch as he sticks in the dagger.)

Along with all such questions of authorial intent we can also consider questions of authorial responsibility. Is it our job, as listeners, to discern the song’s true meaning, working our way through all of its potential layers of irony? Or is it Holmes’ job, as an artist, to communicate that true meaning clearly? Is it possible that we, as listeners, might come closer to such a true meaning than Holmes himself was able to do as the song’s creator? Is the song’s meaning a negotiation between its creator and its listeners? Or should we despair of the possibility of ever determining any such conclusive “true meaning” in a work of art?

I ask these questions, of course, not because any of us needed a refresher course in 20th-century literary criticism, but rather because I am desperately hoping that by distracting myself with such theoretical considerations I might somehow manage to purge this wretched ear-worm from my brain, where it has been cruelly lodged since about 4 o’clock Monday morning.

And also to explain why, whenever I hear “The Piña Colada Song,” I find myself wondering about things like whether the second chapter of Jonah is a later interpolation, and, if so, what was this later editor thinking?

So two days after posting this — a rambling rhubarb that starts out saying “I do not care for” this song, “at all” — I received an email from … Tony winning songwriter Rupert Holmes.

He was gracious and funny and utterly charming. He was also pleased, I think, to find us discussing the possibility that the song was not autobiographical. This story wanted and needed to be told in the first person, and so he didn’t regret doing that, but I think he’s always been frustrated that this has, over the years, led millions of people to conclude that he, Rupert Holmes, was tired of his lady and thus he, Rupert Holmes, wrote to the paper and took out a personal ad in which he touted his love for champagne.

I suppose he can take some consolation in that, at least, those millions of people don’t also assume that he was personally trapped in a mine and found himself forced to eat his friend Timothy to survive.

Anyway, Mr. Holmes seems like a delightful guy. He’s also, as it happens, a Mets fan and in early July, 2015 — weeks before the Yoenis Cespedes trade, with the Mets barely over .500 and two games behind the Nationals — he said he thought that year’s team was special and had a feeling they were headed to the World Series. I thought he was unsuitably optimistic for a Mets fan, but the team won 45 of their next 75 games and actually made it to the World Series.

If the Mets are still in first place come September, I’m going to be playing “Escape (The Piña Colada Song)” on repeat until the end of October.