7/25 Flashback: Bounded on one side

Consider, for example, the ongoing “debate” over the full humanity of women in the church and in society. Some evangelicals are “complementarians” — meaning they believe women must be subservient to men and that the church must maintain strict gender roles while supporting policies that enforce those roles in the larger society. Other evangelicals are “egalitarian” — the term used within the subculture to denote those who believe men and women should be equals under the law, in the church and in families. This side of the debate has been designated the “liberal” side, and is therefore inherently a bit suspect.

Egalitarianism is still tenuously in-bounds, yet it’s also possible to get in trouble for being too egalitarian. It’s permissible, but only up to a point. That point isn’t clearly defined, but if any given evangelical gets a bit too enthusiastic in endorsing an egalitarian “stance” — or, even worse, acting on it — “controversy” will ensue, serving to remind them to settle down and get back in line lest their membership in the tribe be revoked and their speaking engagements and donor-streams start to disappear. 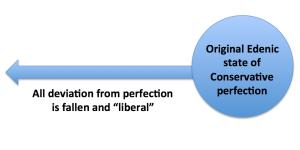 To understand this only-up-to-a-point dynamic, just look at that word itself: “egalitarianism.” We could save several syllables if we just said “feminism,” instead, but that’s not quite the same thing. That’s pretty much the definition of “egalitarianism”: not-quite feminism. Feminism is out of bounds. The word egalitarianism is basically evangelicalese for “as close to feminism as one is permitted to get while still remaining within the tribe.”

The tribe only has “liberal” boundaries. Conservatism is unbounded.

Witness, for example, Mark Driscoll, whose reckless anti-feminism exceeds the cautious not-quite feminism of his egalitarian counterparts. Or consider Douglas Wilson of the Gospel Coalition — he of the screeds about male authority and female submission, endorsing sex as conquest and not as “an egalitarian pleasure party.” Yet the Gospel Coalition is not characterized as “extreme” because the tribe has no category of “extreme complementarianism.” The popular pastors and authors of that coalition are never implicitly or explicitly forced to distance themselves from people like Wilson.

Wilson, by the way, is also a Neo-Confederate slavery apologist. His views on the antebellum South, President Lincoln’s big-government “tyranny,” and the post-war amendments are not substantially different from those of Jack Hunter, a.k.a. “Southern Avenger.” Hunter was recently forced to step down as a staffer for Kentucky Sen. Rand Paul because his right-wing views were regarded as too extreme for Paul’s tea-party supporters and other Kentucky Republicans.

That’s not to say that most white evangelicals are comfortable with Wilson’s Neo-Confederate nonsense. They’re not. But the subculture lacks any useful vocabulary for speaking or thinking of something as too conservative.

“Conservative” occupies the same space in the evangelical imagination as “sexual purity” does. To say someone was “too conservative” — theologically, politically, socially — would be like their saying a bride was too much of a virgin.

This is tied up with the distorted notion of holiness as meaning the avoidance of contamination. In this view, spirituality — like sexuality and all the rest of life — is like a spotless, undefiled white bed sheet. Our task is to conserve the cleanliness of that sheet from all potential defilement. Holiness is a matter of being conservative.

This idea of holiness-as-non-contamination is profoundly un-Christlike. Nothing in the life or teaching of Jesus Christ suggests that avoiding contamination has anything to do with holiness. From the manger to the cross, Jesus’ whole story is about getting down in the dirt with the shepherds, fishermen, tax-collectors, prostitutes, Gentiles, women, Samaritans, zealots, lepers and other “unclean” outcasts of every kind. “Follow me,” Jesus said, but the idea of holiness-as-purity forbids us from doing that.

This framework of conservative = pure, liberal = impure also becomes the basis for determining and defining what is or is not “biblical.” No need to go to the Bible itself to figure that out. No need to read the Bible at all. Whenever you’re presented with two conflicting or competing interpretations, just ask which one is more “conservative” and which one is more “liberal.” The conservative one must be purer and holier, so it must be right. The more liberal view must stray from such purity and holiness because anything that is “liberal” is, by definition, a form of straying.

Consider for example the neo-monastics of intentional Christian communities like the Simple Way in Philadelphia or the Jesus People in Chicago. Their radical embrace of poverty and communitarianism is explicitly biblical — arising from just exactly the sort of literal interpretation that most white evangelicals insist is the proper “conservative” approach to the Bible. Yet people like the Simple Way’s Shane Claibourne are not perceived as conservative because they’re engaged with the world rather than separated from it, and because the form of their zeal corresponds with the cultural signals that signify “dirty hippie” rather than “Republican member of the Chamber of Commerce.”

Shane doesn’t wear a tie, so he must be “liberal,” so all that stuff he says about poverty must not be biblical. That logic is never articulated so explicitly, but that is the logic at work here.

And by that same logic, Doug Wilson is obviously not a liberal. So therefore his views must be purer and more biblical even if they seem repugnant. The spotless white sheet of his holiness may have eye-holes cut in it, but as long as it remains uncontaminated by the stain of liberalism his status and standing within the tribe will go unchallenged.