(The text for this sermon is The Lorax, by Dr. Seuss. Alas, not everyone has read The Lorax, and some others don’t wholly remember it from when they read it or had it read to them as children. If you’re unfamiliar with this delightful, beautiful little book, or if you just need a slight refresher, here is a video of Danny DeVito reading the whole thing.)

So like everyone else, you’ve been buying Thneeds from the Once-ler for years without ever hesitating to think about it.

After all, a Thneed’s a Fine-Something-That-All-People-Need! It’s a shirt. It’s a sock. It’s a glove. It’s a hat. But it has other uses. Yes, far beyond that. …

But then one day you read an eye-opening, heart-rending piece of investigative journalism. You come to understand the awful ramifications of the manufacture and distribution of Thneeds. You learn about Gluppity-Glupp and Schloppity-Schlopp and what they are doing to the critical habitat of Bar-ba-loots, Swomee-Swans and Humming Fish.

And then it dawns on you that you are complicit in this. Every penny you’ve spent over the years buying Thneeds has gone to support the Once-ler’s Truffula-destroying death-machine. And you decide you want no part of that. 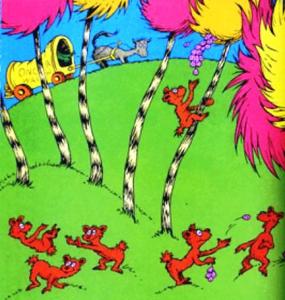 “No more,” you say out loud, your jaw set determinedly, and you vow never again to spend even one penny on Thneeds or anything else the Once-ler might be selling.

This is a Good Thing. It’s also the right thing to do.

First, do no harm. By refusing to participate in the harm being done to the Bar-baloots and the Swomee Swans and the Humming Fish, you’re becoming a less harmful person and therefore a better person. You’re also making your money serve your morals instead of the other way around. This is all good and necessary. I would even say it’s obligatory.

But it’s also mostly about you — not in a selfish sense, but your decision to stop buying Thneeds will affect you more than it affects anything else. Your abstention may have some effect on the Once-ler and on the Bar-ba-loots, etc. By withholding your financial support, you may be very, very slightly reducing the Once-ler’s capacity to harm those creatures. And you’re contributing to market pressures that might persuade the Once-ler to reform his ways — if, that is, he is somehow able to determine that his infinitesimal dip in revenue is due to losing you as a customer, and if he is further able to guess at the reason for that loss.

You’ll probably want to encourage such reform by sending him a letter announcing your decision and explaining your reasons for it. It’s not terribly likely, but it’s possible that such a letter will help to nudge the corporation in a more positive direction.

But even after you craft a compelling, eloquent letter and fire it off to Once-ler HQ, the bottom line is that your decision to never again buy a Thneed won’t do much to change the Once-ler or to change the world. Mostly it will just change you.

Having changed yourself, you’ve now become the sort of person who can’t bear not also trying to change the world. You realize that’s a much bigger job and that you won’t be able to do it alone. So you decide to start organizing and recruiting others to join you in a formal boycott of the Once-ler.

Boycotts are not about “never.” Boycotts are about “until.” (Or, to stick with our theme here, about “unless.”)

The point of a boycott is not to start a “No Thneeds” club, but rather it’s about leveraging your collective economic power as consumers to compel the Once-ler to reform his practices. If the only goal of your boycott is a cry of protest — a collective howl of “Yee-argh!” — then you probably will achieve that goal.

But that’s probably all you will achieve.

To be effective, a boycott needs to set specific goals and to make specific demands. You’ll need something concrete and measurable that you can demand the Once-ler do, insisting that none of you will buy Thneeds until he commits to doing it. Perhaps a Truffula-tree replanting program to ensure a sustainable Bar-ba-loot habitat, plus a commitment to stop dumping Gluppity-Glupp into Humming Fish ponds.

This approach is far likelier to have an impact on the Once-ler’s behavior, and is thus likely to be a more effective way of changing the world.

But note that this approach also once again involves you in the world of the Once-ler. You’re no longer abstaining. By shifting the focus away from maintaining your own impotent innocence, you may lose a bit of that innocence in exchange for losing that impotence. “Never again” becomes “not until,” and the promise of achieving some kind of individual moral purity recedes a bit.

And unless someone like you cares a whole awful lot, nothing is going to get better.

August 1, 2022 8/1 Flashback: Have fun
Recent Comments
0 | Leave a Comment
"My suspicion is that they do. Medieval illustrators were mostly monks, and in addition to ..."
Jim Roberts 12/9 Flashback: An easy prediction
"Medieval illustrators really don’t get out much, do they?https://uploads.disquscdn.c..."
Matri 12/9 Flashback: An easy prediction
"How can it be that people can rise so high in power and responsibility, yet ..."
Eeyore 12/8 Flashback: Synonyms
"https://www.youtube.com/wat...I realize that some people may say "The Republicans want to defund the Military? Good ..."
reynard61 12/8 Flashback: Synonyms
Browse Our Archives
Related posts from slacktivist