Where did these guys come from?

I’ve never heard a sermon on Ezra 10:15. There should be sermons on this passage. Lots of them. It should be the stuff of altar calls and bonfire dedications reserved for the last night of Bible camp or youth-group retreats.

This should be one of those verses that appears on T-shirts and bumper stickers, inspirational posters and tattoos. It should’ve been one of the verses that Tim Tebow penciled into his eye-black. It should be the senior quote that devout young believers select for their yearbooks and a perennial Top-10 pick for anyone who decides to choose their “life verse.”

Because Ezra 10:15 is just an amazing, inspiring, confounding passage. Here’s what it says: “Only Jonathan son of Asahel and Jahzeiah son of Tikvah, supported by Meshullam and Shabbethai the Levite, opposed this.” 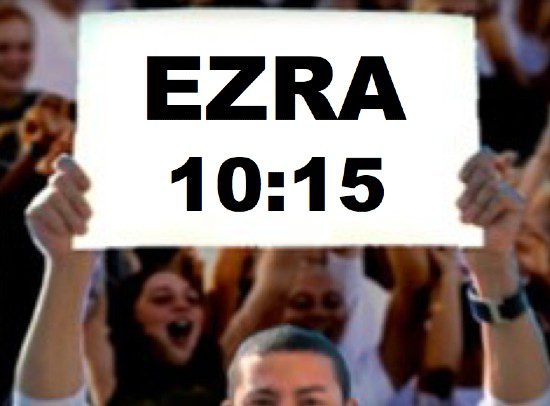 Snipped from context, that doesn’t seem like much. Just a pile of unfamiliar, hard-to-pronounce names.

They shouldn’t be unfamiliar names. These names ought to be every bit as familiar, at least, as Shadrach, Meshach, and Abednego (even if this list lacks the appealing rhythm of that one). Anybody raised in Sunday school and VBS ought to be able to recite these names easily due to the multiple recitations they’d heard of this beloved Bible story, perhaps singing them to the tune of a Bible-class children’s song about “Meshullam and Shabbethai and you and I.”

But most people, even most people raised in church and church culture, don’t know these names.

So who are these guys? And what was it that these four — and “only” these four — people “opposed” that everyone else in this story supported?

Well, this is from the story of Ezra. So this is about Ezra’s grand scheme of ethnic cleansing.

That’s the context here. Ezra is the leader of the Israelites who have returned from exile and are trying to rebuild their city and their culture from the ruins. This isn’t going well and so Ezra and his closest advisers ponder why and they decide it must be because of the women and children. Those women and children are Moabites — dirty foreigners, strangers, aliens. And clearly all the problems with the rebuilding of Jerusalem must be due to the presence of these evil, nasty Moabite women and their half-breed children.

Thousands of Israelite men had compromised themselves by marrying these Moabite women and then producing these tainted, foreign offspring. And so Ezra came up with a plan: Mass divorce. A mass divorce so huge it would take three days to carry out, even when doing these dozens at a time. Then all of these thousands of Moabite ex-wives would be sent away, along with all of their tainted children.

Sent away where? Doesn’t matter. Not our problem. Just away is all that matters. Cast them out like Hagar and Ishmael. And then the newly purified, untainted people will at last be able to succeed in rebuilding the city.

That was the plan and it had the near-unanimous support of every leader among the people:

Ezra rose up and put the leading priests and Levites and all Israel under oath to do what had been suggested. And they took the oath. …

Within the three days, all the men of Judah and Benjamin had gathered in Jerusalem. And on the twentieth day of the ninth month, all the people were sitting in the square before the house of God. … The whole assembly responded with a loud voice: “You are right! We must do as you say.”

Everybody was at the rally (well, every man, anyway). All the leaders, with no dissent, explained the plan. And the whole assembly loudly agreed.

Except for these four: “Only Jonathan son of Asahel and Jahzeiah son of Tikvah, supported by Meshullam and Shabbethai the Levite, opposed this.”

That’s Ezra 10:15, and how that verse ever got included in the rest of this passage is a puzzle. I haven’t researched the scholarship on this so I don’t know what the general consensus is about whether this verse is a later addition or part of the original version of the text.

The case that it was a later addition has a lot to recommend it. Condemnations of Ezra’s horrific scheme, after all, make up a considerable chunk of our scriptures, both in Hebrew (see, for example, the entire book of Ruth*) and in Greek (see the genealogies in the Gospels). Ezra’s plan for ethnic cleansing via mass-divorce and child-abandonment shapes and re-shapes scriptural discussions of divorce in both the “Old” and New Testaments.

So I can imagine some later redactor — someone like the author of Jonah or of Malachi — inserting this (depressingly short) list of opponents here as a way of deflating Ezra a bit or as a reminder that not quite “the whole assembly” was on board with this hideous crime. That’s possible.

But it’s also entirely possible that this list of detractors was original to the author of the surrounding text in Ezra, someone who seems to have thought ethnic cleansing and mass-divorce was a spiffy plan. If that’s the case, then these names must have been included, perversely, for the same reason that other scriptures record the names of people like Korah — the guy the book of Numbers says led a rebellion against Moses and was, consequently, swallowed up by the Earth. It may be, in other words, that the author of Ezra was so caught up in the hysteria of this “You are right! We must do as you say” rally for ethnic cleansing that he wanted to single out Jonathan, Jahzeiah, Meshullam, and Shabbethai as stubborn, rebellious fools who failed to appreciate the clarity and simplicity of righteously exiling and abandoning thousands of one’s own children.

So I can’t say for sure whether this verse is the product of someone intending us to see JJM&S as heroes or as villains. I’m not sure where this verse comes from.

Within the context of the story itself, it’s also difficult to say where these guys come from. We’re told they “opposed” Ezra’s plan, but we’re not told why. The story records the fact of their objection, but none of the reasons for it. All the story has to tell us is that “only” these four “opposed this.”

That’s not possible to believe, of course, even within the story as it is told. These four may have been the only men in the whole assembly who spoke out against this plan, but the “whole assembly” described in the story is only men. None of those thousands of Moabite wives and one-drop-too-Moabite children were a part of that assembly, but it’s impossible to believe that all of those mothers and their children were enthusiastic about Ezra’s plan to cast them all out into the wilderness empty-handed. None of those women was allowed a voice in that assembly, or in the story as told to us by the book of Ezra (which is, again, why we have the book of Ruth). The closest this story comes to allowing us to hear from any of them is the parenthetical mention, and hasty dismissal, of some unexplained “opposition” from four dissenters.

But while the story offers no explanation of or for their dissent, we as readers can’t help but wonder what it was that motivated Jonathan et. al. to speak up against “the whole assembly,” risking a great deal to take a stand on what they must surely have realized was the losing side.

That, as I said up top, ought to be the stuff of sermons.

And right about now those sermons seem particularly urgent. These are, one might say, ruthless times.

Jonathan son of Asahel and Jahzeiah son of Tikvah, supported by Meshullam and Shabbethai the Levite may seem like obscure names from Bible trivia, but it would be immensely helpful if more American Christians learned those names between now and November.

* And the story of Ruth wherever it echoes up in any discussion of the line of David, which is a lot.

David is, of course, the son of Jesse. But who was Jesse’s wife and David’s mother? The Bible doesn’t say. (The Talmud gives us a name, Nitzevet, but she’s not named anywhere in the canonical stories or genealogies of David.)

The name of David’s great-grandmother is really, really important. That’s why you know it and why you may not even have noticed previously that you didn’t know the names of his mother and grandmother. Ruth is important because “Jonathan son of Asahel and Jahzeiah son of Tikvah, supported by Meshullam and Shabbethai the Levite” were right and Ezra and the whole assembly were wrong and nearly every biblical discussion of the line of David and the lineage of David has been written or rewritten to underscore that point.