“Apologetics” is the subcultural jargon term for offering dismissive answers to difficult questions. 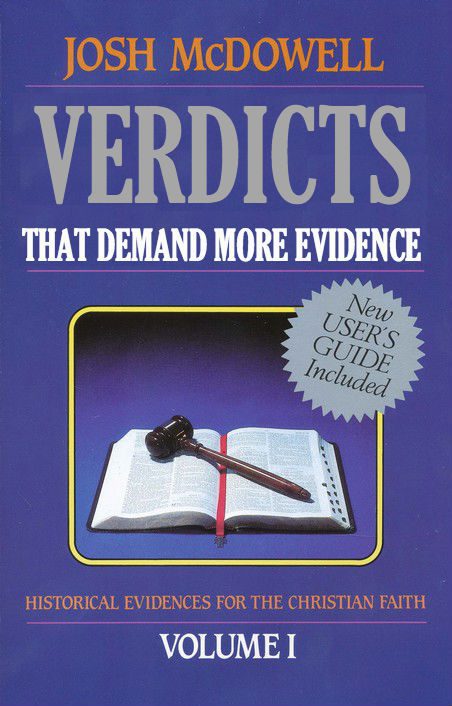 Among American fundamentalist and white evangelical Christians, “apologetics” is a an internal exercise — it’s not an attempt to answer questions posed by outsiders, but rather a device for reassuring insiders that they need not worry about, or listen to, such questions.

Books on “apologetics” therefore tend to sell very well. They’re widely recommended, but far less widely read. I learned this growing up among the fundamentalists. I would ask some question and, often, the response would be something like, “Gaaah! Questions! Um, I dunno, here’s Josh McDowell’s Evidence That Demands a Verdict. Read that.”

If anything, McDowell’s evasiveness only left me more insistently asking the same questions. “So I read that book you recommended, and in chapter four …” But it turned out the person who recommended the book hadn’t actually read it and couldn’t offer any further help to me except, perhaps, to recommend that I also read Josh McDowell’s More Evidence That Demands a Verdict.

McDowell’s unsatisfying books were supposed to enable me to obey the much-quoted verse of 1 Peter 3:15: “Be ready always to give an answer to every man that asketh you a reason of the hope that is in you.” That verse, I was taught, charged us to be prepared to win a debate with any doubter. But I’d enthusiastically read all the “apologetics” books in the church library and I still didn’t feel prepared to do that.

It wasn’t until many years later, by the way, that I finally grasped the full context of that verse in 1 Peter — which isn’t about offering a defense of orthodoxy in debate, but about orthopraxy:

Now who will harm you if you are eager to do what is good? But even if you do suffer for doing what is right, you are blessed. Do not fear what they fear, and do not be intimidated, but in your hearts sanctify Christ as Lord. Always be ready to make your defense to anyone who demands from you an account of the hope that is in you; yet do it with gentleness and reverence. Keep your conscience clear, so that, when you are maligned, those who abuse you for your good conduct in Christ may be put to shame.

Nothing in there about the question-begging redefinition of terms or the bestiary of straw men or any of the other tactics I’d found discussed by McDowell & Co. The only “answer” or “defense” suggested in that passage is “do what is good.”

I’d lost track of and interest in Josh McDowell over the years until began noticing his worries about the Internet. His concern that the vast amount of unfiltered information and argument on the Web would deceive Christian youth seemed to reveal a lack of confidence in the pat answers he’d previously offered. He seemed worried that “atheists, agnostics, skeptics” on the Internet would present an overwhelming tide of evidence leading to a different verdict from the one he’d taken as his conclusive starting point.

Today I read, via Hemant Mehta, that McDowell is still making this argument about the Internet, and that his lack of confidence in his own answers seems even more pronounced:

“Every pastor, youth pastor, and every parent is in competition with the Internet and the information it is spreading,” said McDowell. “Most young people don’t get their news from CNN or CBS, they get it from bloggers. There are about 181 million bloggers vying for the attention of your children.”

The unlimited amount of online information that people have access to has caused an increase in skepticism that will only continue to become more pervasive, says McDowell.

Hemant’s response to this is exactly right:

The 181,000,000 is a tad high, but McDowell is wrong about something more important: The access to all the online information doesn’t (generally) lead to skepticism about all ideas, only bad ideas. The truth has a better chance of emerging when all the viewpoints are out there, not when you’re sheltered and only hearing what your pastor wants you to hear. If Christianity is losing that battle, it’s not the Internet’s fault.

I don’t share McDowell’s hyperbolic anguish over this, but I’m sympathetic to his concerns so far. Until he gets to this:

What in the wide world of sports is he talking about?

Christian Post reporter Jessica Martinez does not tell us how this statement was received by McDowell’s audience at Southern Evangelical Seminary’s Christian Apologetics conference. Did they quietly exchange puzzled looks of did he really just say what it sounded like he just said? Or were they knocking over chairs in a rush to back out of the room and get away from this strange man as quickly as possible?

I’m aware of Rule 34 and Rule 36 and of the vast cornucopia of human diversity when it comes to sexuality, so I’m very cautious about categorical statements. But I think it’s appropriate to make one here: No actual human being, anywhere, in any time, has ever experienced what McDowell there asserts is the average experience of the average person. Caligula would look at McDowell’s statement and shake his head in perplexed horror.

The only imaginable exception to that is the terrifying possibility that McDowell is speaking from experience — that he was, in effect, saying to his audience, “We all know how it is … you start out with pin-ups and, before you know it, you’re into zebras, amirite guys?” But I really don’t think that’s true. I’m certain he wasn’t speaking autobiographically — that he was describing an imaginary scenario as foreign to his own experience as it is to everyone else’s.

And in a way that’s just as bad. McDowell is not confessing his own sins, he’s asserting that “the average person” is guilty of sins that he himself would never commit.