Advent and Coming Justice (Part 3 of 3) 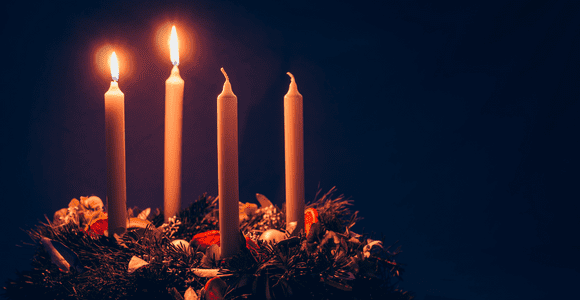 John the Baptist was part of a Jewish liberation and reformation movement. He, like others, practiced immersion baptism as an act of repentance, atoning for past injustices, recommitting to righteousness, and dedicating oneself to a vision of liberation and restoration for Jewish people. That era of restoration would begin with a global end to all injustice, violence, and oppression.

I agree with scholars who interpret Jesus as having begun as a disciple of John’s. Within John’s community, there is a spirit of looking forward to something that was about to change for the better, and whereas John said it was coming, Jesus said it had arrived, was near, or was already among us, in our midst.

Today, those of us engaging justice work also look forward to and are working toward an iteration of our world that is more in harmony with justice and inclusion. Justice workers who value the Jesus story sometimes refer to this change as God’s just future, the basileia, the kin-dom, beloved community, and more. John the Baptist interpreted this change as the breaking in of God’s work in our world, an intervention in which his followers were invited to participate. Today, we also understand that a more just future depends on our cooperation with each other (and with the Divine for those of you who are theists).

As we wrap up another year, what accomplishments do we have to be thankful for? What lies ahead as we anticipate another year of working toward a world that is a safe and just home for everyone?

This week’s reading concludes with John’s anticipated restoration and liberation being an era of reversal and upheaval, not just restoration. It was to be a time of opposites, where wheat was gathered and chaff was burned up. I’m okay with this imagery if we apply it to life-giving social elements: I actually like the idea of gathering up life-giving things and forming a society out of them. I like the idea of death-dealing elements and systems being burned up in the purifying fire of life, love, compassion, and justice. I can lean into that!

But I want to lean away from any interpretation of this passage that applies threshing, gathering, or burning to people. We can say “no” to injustice while not letting go of the humanity of those responsible for that injustice. We can obstruct them and their activity today while holding space for them to change if they should choose to tomorrow. We want to reclaim and hold on to our own humanity while not letting go of anyone else’s. I love the way Rev. Dr. Jacqui Lewis of Middle Collegiate Church says it in her book Fierce Love:

“As a scholar who has studied religion and psychology, as an author of books on identity development and the power of stories, as a professor who teaches about leadership and anti-racist work, I understand why and how people and systems change. I know this to be true: The world doesn’t get great unless we all get better. If there is such a thing as salvation, then we are not saved until everyone is saved; our dignity and liberation are bound together.” (Rev. Dr. Jacqui Lewis, Fierce Love, p. 14).

During this season of Advent, we commemorate where justice, liberation and salvation has arrived in the past and make time to look forward to where it may arrive again and how we can participate that just future today.  In the spirit of Lewis’ inclusive salvation for everyone, I’ll close with a quote from Pam McAllister who, in explaining the work of Barbara Deming, shares this applicable wisdom:

“Barbara wrote about the two hands of nonviolence. She wrote that nonviolence gives us two hands upon the oppressor . . . This visual metaphor is particularly helpful in describing the basic attitude underlying the nonviolent sensibility. With one hand we say to an oppressor, ‘Stop what you are doing. I refuse to honor the role you are choosing to play. I refuse to obey you. I refuse to cooperate with your demands. I refuse to build the walls and the bombs. I refuse to pay for the guns. With this hand I will even interfere with the wrong you are doing. I want to disrupt the easy pattern of your life.’ But then the advocate of nonviolence raises the other hand. It is raised out-stretched—maybe with love and sympathy, but maybe not—but always outstretched with the message that (as Barbara wrote), ‘No, you are not the other, and no, I am not the other. No one is the other.’ With this hand we say, ‘I won’t let go of you or cast you out of the human race. I have faith that you can make a better choice than you are making now, and I’ll be here when you’re ready. Like it or not, we are part of one another.’ The peculiar strength of nonviolence comes precisely from the dual nature of its approach—the two hands.” (Pam McCallister, You Can’t Kill The Spirit, p. 6-7)

In this just future that we are working for now, may all things death-dealing be burned up like chaff with fire that cannot be quenched. May all things life-giving be gathered up and cherished. And may this future be one of salvation for each of us together.

December 7, 2022 The Love and Justice of Advent (Part 1 of 3)
Browse Our Archives
Related posts from Social Jesus