How I’ve Stopped Cleaning My House 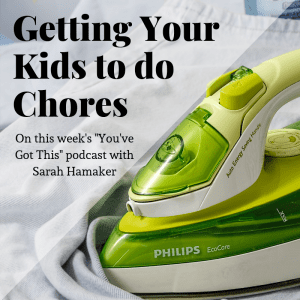 The following is an excerpt from my podcast, “You’ve Got This.”

I don’t clean my house anymore. No, I don’t live in a pigsty with massive dust bunnies creeping out from under my furniture. Instead, my four children do the lion’s share of the housecleaning these days, and it’s wonderful. Not that everything’s perfectly cleaned, but every week, the bathrooms and kitchen are wiped down. The floors are vacuumed and mopped. The grass is mowed, and the weeds are pulled. Daily, the dishes are done. The kids take turns cooking dinner for the family, and making lunches for the children.

Need further convincing about the importance of chores? Let’s talk about the positive benefits, why chores shouldn’t be tied to compensation, and how to introduce chores to kids. (My popular Chores for Kids ebook gives details on how to each chores and what chores are appropriate at what ages.)

The Positive Benefits of Chores
By their very nature, children are consumers. It starts innocently enough because as infants, children can’t do anything but take. Sometimes, though, we as parents fail to guide our children through the transition from consumers to contributors. The bottom line? Children consume enough of the family’s resources that they should contribute to the family’s upkeep.

Chores build confidence. Just listen to my oldest brag to her friend that she cooks the entire dinner meal by herself for the family. She has discovered that she’s capable of doing something without assistance, something that contributes to the family.

Chores build character, specifically a good work ethic. Being a good employee when they grow up is started by teaching them how to be a good member of the family through chores. Believe me, your child’s future employer will thank you.

Chores and Compensation
Well-meaning parents tie chores to payment as a way to motivate their children to do the chores without fussing or to do a better job. But the chores/payment tie-in can create a world of problems. Why? Because it gives the illusion that the child or teen has a choice.

Here’s how. One of 11-year-old Toby’s Saturday jobs is to weed the large vegetable garden in the backyard, not his favorite way to spend a sunny weekend day. His parents, tired of his complaining, decide to tell him that he’ll get $5 for weeding the garden. That sounds really good to Toby, and he’s off with a happy smile to the backyard.

A few weeks later, Toby has a birthday and receives a gift card to his favorite store from his grandmother, and a few dollars from his great aunt. When Saturday rolls around, he’s flush with cash and decides he doesn’t “need” the $5 payment for weeding the garden—which really needs some TLS.

That puts his parents in a quandary because when they used $5 as a motivation to do the job, they didn’t mean to say that if Toby didn’t want the $5, he didn’t have to do the chore. But in effect, that’s what tying compensation—whether monetary or something else, like a special treat or outing or gift—to chores a child should do simply because he or she is part of your family. Chores are service to the family—if you pay for the chore, then it’s no longer an act of service.

However, there can be times when you decide an extra job that’s not on the normal chore routine needs doing and that you’re willing to pay for that extra job. I created a list of such jobs and assigned small monetary amounts to those chores. If a child wanted to earn some extra money, he or she could ask to do an extra chore. Sometimes I said yes, sometimes I said no. And sometimes, I would assign those extra chores without compensation—that was also clearly understood by my kids.

Introducing Chores to Your Kids
Remember that if your kids have done minimal work around the house until now, they are going to fuss about doing the work. Ignore this. And don’t try to overly explain why they’re doing chores. My stock answer to that question is because you’re part of the family.

Then teach them how to do chores. This training should be two-fold. Step one is to demonstrate the chores. You will need to do this more than once as you begin. Refer to the chore instructions for how to do the chores, so that the child can use that as a reference point going forward. Having detailed instructions clears up any confusion as to what you mean by clean the bathroom and also helps a child realize what steps are involved in specific chores. Step two is to letting them do the chore with light supervision, such as coming by in the middle of the chore to ensure it’s being done properly.

View chores as a training ground, which means the child will not do the task perfectly, especially in the beginning. Have patience as your child learns the chore and don’t overly criticize his or her work. You might have to rewash a lot of pots in the beginning, but practice does indeed make perfect—or at least a more acceptable outcome. Periodically, gently correct the child who’s consistently not performing the chore in the manner you’d like it, but be sure to allow for different ways of doing things that achieve the same outcome. In other words, don’t get hung up on having a child do a chore exactly the way you think it should be done—give some leeway for a child to do it his or her own way, as long as the results are satisfactory.

Overall, remember that chores aren’t only about getting things cleaned or accomplished—it’s about learning tasks, contributing to the family, and working together for everyone’s good. When we keep the bigger picture in mind, we will have more success in having our kids do chores.

To hear more, listen to “Getting Your Kids to do Chores” on the “You’ve Got This” podcast. 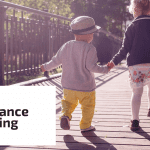 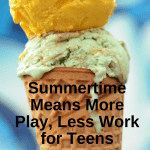 June 7, 2019 Summertime Means More Play, Less Work for Teens
Browse Our Archives
get the latest from
Family
Sign up for our newsletter
POPULAR AT PATHEOS Family
1

How often should a married couple...
Dave Willis
Books by This Author Books by Sarah Hamaker

Why I've Stopped Trying to Change the World
I was reading a commentary on The Book of Proverbs a few...

This Is What Makes Your Man Vulnerable—Be Aware...
When your husband’s mood turns a bit icy when you ask him...
view all Family blogs
Copyright 2008-2020, Patheos. All rights reserved.