How to Have Conversations About Race With Your Kids 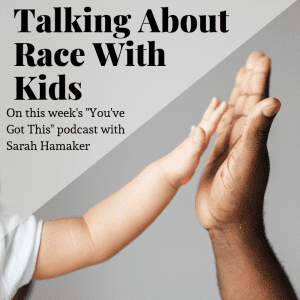 The following is an excerpt from my interview with Elizabeth Behrens on my podcast, “You’ve Got This.”

Elizabeth is originally from Iowa, but now lives in Kansas City with her husband and four children. She has a job she loves as ambassador, educator and engagement coordinator for Be the Bridge, a non-profit organization founded by Latasha Morrison. Be the Bridge equips people to increase racial literacy and work toward racial reconciliation. Her work with Be the Bridge allows her to teach online classes, tell the stories of how people’s churches, schools and communities are changing through using the Be the Bridge curriculum, and interact with a group of more than 22,000 fellow racial bridge builders in the organization’s Facebook group. She also volunteers as a CASA (court appointed special advocate) for children in foster care. When she isn’t busy with work and volunteering, she can be found being rejuvenated by reading, gardening, or if she’s lucky, traveling.

As parents, it can be hard to have conversations about race. No matter the color of your skin or your ethnic background, it can be hard to bring up race. Why is it so hard for us to talk about that?
Elizabeth: I think there’s a lot of reasons for that. I particularly work with white parents because for us, a lot of us grew up in the 80s and 90s, and the idea of color blindness was all the rage of time. Our parents were told not to talk about race, and so we are sort of starting from scratch.

I think it also can be where you are. I grew up in a very small town in southern Virginia. But when I look at how diverse my kids’ classrooms are at school, it’s so different from my own experience growing up.
Elizabeth: Our kids are growing up in much more diverse environments, but that doesn’t mean we shouldn’t talk about race. Even with diversity around them, we are afraid to teach them something that could potentially backfire in public. We’re just really scared of saying the wrong thing, and in turn, of our kids saying the wrong thing and hurting someone unintentionally.

I do think that sometimes because we are so afraid, we won’t have those conversations. We don’t want to talk about race like it matters, but it does matter.
Elizabeth: It does matter, and I think we got to start with understanding that first off—that it does matter and that our children are actually developing an understanding about race. The reality is that we have the option to either let the develop those ideas without adult supervision and assistance, or to develop them with a helping hand and a knowledgeable eye. We want our kids to have wide-open eyes looking at the world around them and making sense of it. We don’t want to cut them off to thinking about all the different kinds of people that God made on this earth. That’s a great positive thing, but the problem is that we also know that by about the age of seven, children really start to develop some racial bias. Parents get defensive when I use that word because people assume I’m saying that their seven-year-old is racist, but I’m not. Kids put people in categories because that’s how children make sense of the world. We know study after study shows us that having meaningful, open conversations about race is what leads to children who are most able to navigate a multiracial world without the prejudice or bias.

For some of us who live in areas where there’s not a lot of racial diversity, it’s good to know that having those conversations can have an impact on how the children view the world.
Elizabeth: In our home, we use the phrase Imago Dei a lot—this idea that we are created in the image of God. Each human is made in the image of God and God is so big and so amazing that you couldn’t just have one picture of him with one kind of person. God wanted to show himself to be so amazing and so beautiful that he needed all these different skin tones and cultures and backgrounds to fully show us how big it amazing he is. Kids from a young age can really latch on to that idea.  that God is so big that he needed to – that me and his personal totally different than me both show what God looks like because he can’t be some [0:12:28] with just a tiny picture.

That is a beautiful way to kind of encourage our children to look at the world and go, “Wow, just like there are so many colors in nature.” It should makes us appreciate all the creativity that we see in others.
Elizabeth: We just had a conversation yesterday with our first grade son, and we use that same descriptor: God is so big it amazing that he gave us every body type, every size and shape, and color, and hair texture. When we make fun of someone based on how they look, we are saying this piece of the image of God is worth making fun of.

As we continue to have these conversations with our kids about race, it’s so important for us as parents to make sure that we are not shutting ourselves off from potential friendships or potential interactions because of racial or ethnic differences too.
Elizabeth: A lot of those children develop assumptions about their parents’ views on race based on who were their parents interacting with. Who did their parents value asking over for dinner? Or were friends with? I’ve worked with some families that realized they chose a school for their kids that was actually almost all white, and they went to church on Sunday at a church that was predominantly white as well. Therefore, the parents’ friendships were predominantly with white families. What message is that sending their kids that we say we value people who look different than us yet we choose to invest in people that look the same as us?

We can have all the conversations in the world you want to, but if they see us not taking advantage of opportunities to mingle with people of different races, it says something else.
Elizabeth: Just as I teach my children that we see the image of God in every type of person, I feel like we better understand the world, we better understand God when we have a variety of people in our lives. I want that for me, not just for them.

We keep saying how these meaningful conversations, what does that look like for those that are new to this? It’s going to take parents educating themselves on the racial history in America and what’s currently going on. If we don’t have a foundation to teach from, we’re going to be foundering. 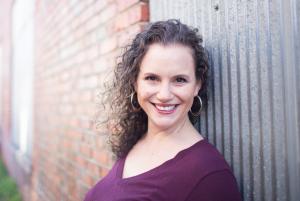 One of my favorite recommendations for parents on any kind of tough topic is find some great children’s books. We love The Colors of Us and The Skin You Live in. Both of them talk about all the different skin tones and colors the world comes in, and bring it up in a way where it opens conversation and children are able to talk about it and don’t think it is an off-topic conversation.

To hear more great advice and stories from Elizabeth, listen to “Talking About Race With Kids” on the “You’ve Got This” podcast. 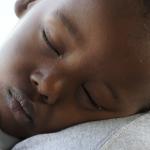 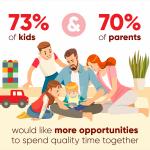 August 16, 2019 Kids Want to Spend Time With Family
Browse Our Archives
Follow Us!

8 Signs Your Marriage May Be...
Terry Gaspard
Books by This Author Books by Sarah Hamaker