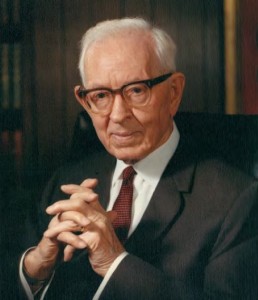 Nathaniel Givens has gathered a group of friends to begin gleaning insights and inspiration from LDS General Conference talks beginning with the first available at LDS.og. So here are a few thoughts of mine on the Saturday Morning Session, April 1971 — and follow the links at the bottom of the page to others’ posts on the same session. Next week, we’ll continue with the afternoon session of the same conference, and so on, for the next few decades.

April, 1971… I suppose I was starting an academic quarter and finishing spring football practice at Utah State University, going through some turmoil not unusual for a 19-year-old, facing the end of my football career, hesitating between the blond who loved me (she thought) and the brunette I loved (I thought), etc., etc. By fall I might have been getting serious about getting my life in order, putting the divine promises I had been taught to the test – but not yet, not April, 1971, not my first springtime in Logan, living in the “Animal Pit” (football dorm), where marijuana and steroids and much else were taken for granted (not by me), and the only fully visibly practicing Mormon (prayed by his bedside in the dorm) was an object of curiosity, perhaps derision, perhaps confused admiration (at least by me).

So it’s a good bet I heard nothing of this conference in April 1971. All the more reason to be grateful to some friends for prompting me to examine it now, as we work forward to the present from the first conferences available at lds.org.

First surprise: President Joseph Fielding Smith had a different view of Church authority than outstanding historian Richard Bushman (as interviewed by the inventor of another “New Mormonism,” Bill Reel:

Richard Bushman: I think the most fundamental meaning is that God is in this work. And he’s helping us when we try to serve in the church and try to bless our brothers and sisters. That he’s helping the leaders of the church guide the church along and in general we’re on the side of our Heavenly Father when we’re part of the church and what I think it doesn’t mean or I’m sure it doesn’t mean is that no one else in the world can come to God without the church. I mean we’re really only a fraction of one percent of the world’s population, and I can’t imagine a God who wouldn’t have any interest in other people or that they would be living vain lives until they run into Mormonism. I have evangelical friends who are probably stronger followers of Christ than I am and I would think when they went to heaven God would certainly welcome them and that people all over the world can be uplifted spiritually that God is working with them and answering their prayers, so it isn’t really a matter of salvation, I don’t think. It’s ostensibly that we have God with us in our work. I would add one other thing. When I hear the statement that the church is true we normally put the emphasis on the word true but I would put the emphasis on the word church because I think what we do have is we have particular missions that we can do as a church that may be distinctive or that we may be particularly good at and ours is producing people of good will. People that grow up as Mormons learn to be generous with their time. They learn to sacrifice, they learn to get along with other people, to respect other people’s feelings, to avoid competition in striving to get ahead and I think those are wonderful gifts that come to us through our church experience, and I do think we have a mission to carry out that goodwill into every area of our lives. Into board rooms and playing fields and stages and classrooms wherever we go. We should be the people of good will.

President Smith –oddly, for a prophet — is somewhat readier to “rub people the wrong way”:

We are engaged in the Lord’s work; this is his church; he is the author of the plan of salvation; it is his gospel which we have received by the opening of the heavens in this day; and our desire and whole purpose in life should be to believe the truths he has revealed and to conform our lives to them. No person in or out of the Church should believe any doctrine, advocate any practice, or support any cause that is not in harmony with the divine will. Our sole objective where the truths of salvation are concerned should be to find out what the Lord has revealed and then to believe and act accordingly.

Since the Lord has revealed his everlasting gospel anew to us in this day and has made The Church of Jesus Christ of Latter-day Saints the custodian and dispenser of its saving truths, I desire now to restate for the Church and for the world a few of those eternal principles which must be accepted by mankind if they will save themselves. Our knowledge of these simple and yet profound doctrines has come to us by revelation in this dispensation.

…We announce that The Church of Jesus Christ of Latter-day Saints is the kingdom of God on earth, the only place where men may come to learn the true doctrines of salvation and find the authority of the holy priesthood.

We believe the Holy Ghost is a revelator and that he will bear testimony to honest people everywhere that Jesus Christ is the Son of God, that Joseph Smith is a prophet, and that this church is “the only true and living church upon the face of the whole earth.” (D&C 1:30.)”

“We believe it is by grace that we are saved after all that we can do, and that building upon the foundation of the atonement of Christ, all men must work out their salvation with fear and trembling before the Lord.”

I am aware that the somewhat commonsensical use of the “after all we can do” phrase to remind us of the role of human agency in salvation is somewhat out of fashion today. And there is no doubt that we have benefitted by recent reflections on grace, both in General Conference and in the LDS scholarly world. But there is a temptation to believe that we, today, have invented “grace,” just as we have invented “doubt” and “questioning” – trials unknown to earlier generations, it seems. In any case, in view of the pendulum’s swing away from “works” and towards grace, it is not bad to be reminded that “men must work out their salvation with fear and trembling.” Which of course in no way diminishes the sovereign role of grace: our repentance would be impossible, would make no sense, without the atonement.

Elder Spencer W. Kimball (Acting President of the Twelve), was definitely in full voice on April 3, 1971. And his warnings about deceptive voices that are “all about us… some… harsh and raucous, others sweet and penetrating” could hardly be more relevant today. The Cold War context (marked by a quotation from a leading conservative, anti-Communist periodical) sharpens the urgency of the warning – but this, too, would not require much adaptation to relate to our times:

A prominent columnist wrote of our day: “One thing is certain. We shall be given no centuries for a leisurely and comfortable decay. We have an enemy now—remorseless, crude, brutal and cocky … [who believes] that we are in an advanced state of moral decline … [and] ripening for the kill.” (Jenkin Lloyd Jones, Human Events, November 24, 1961.)

The main source of decay Pres. Kimball decries is clearly sexual immorality and the attendant decline of the family. The ideology behind this immorality and this decline was then edgy and revolutionary; now it is mainstream, practically a matter of common sense, even of revised, “compassionate” Christianity:

With a theory that “life is for sex,” every imagination of the minds of men devises ways to more completely get what they call “sexual fulfillment,” which they demand at the expense of all else—family, home, eternal life. There should be from press and lecture platform and pulpit deep and resounding voices urging man to rise above the carnal and rest his mind on things clean and sacred.

Church and civic leaders who countenance such theories “may have to answer for their perpetuating falsehood and their failure to give true leadership in combating evil. ‘… as with the people, so with the priest. …’” (Isa. 24:2.) Elder Marvin J. Ashton, in the next address, similarly warns against false teachings that lead so many astray:

There seems to be a tendency among many of us in our society today to live by compromise, rationalization, comparison, and self-justification. Love of right has been replaced by love of acceptance and convenience. Some mistakenly think the pathway of safety is somewhere between the path of righteousness and the road to destruction. Others seem to have convinced themselves that the way to perfection is reached by traveling the highway of compromise.

President Kimball, characteristically, leaves no doubt as to the Church’s position on sexual sin — which, to my knowledge, has not been subsequently modified: “… sexual sin—the illicit sexual relations of men and women—stands, in its enormity, next to murder. The Lord has drawn no essential distinctions between fornication, adultery, and harlotry or prostitution. Each has fallen under his solemn and awful condemnation…”

Some, reading these vigorous warnings from more than four decades ago, will find in them a reason to dismiss or to relativize current warnings that echo them. If they said then that we were facing a crisis, and they’re saying it still, or again, now – then clearly this is just a rhetorical style of our ever-alarmed authorities. But I wouldn’t be so sure. Forty-four years is but a moment in the history of salvation, and, in any case, the fact that we are now inured to signs of decay that then seemed radical and alarming by no means proves that the warnings were overwrought then and are obsolete now. Quite the contrary, in fact.

December 2, 2015 The Return of the King
Recent Comments
0 | Leave a Comment
Browse Our Archives
get the latest from
Latter-day Saint
Sign up for our newsletter
Related posts from The Soul and the City