The Return of the King

The Return of the King December 2, 2015 rhancock 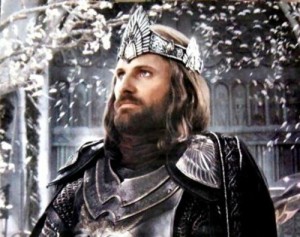 Elder Wilson’s BYU devotional on Tuesday was quite a significant statement, and rich with historical and literary reference. The speaker proposed to address the big issues of our time through the lenses of literature and history. You’ll want to listen to the whole thing, but here are some of my highlights:

A century ago Western humanity’s faith in human progress led by science was dealt a heavy blow by the horrors of the First World War; a sense of dissolution, cynicism, helpless and despair seemed to discredit inherited Christian hopes and values along with the progressive faith.

The Second World War further darkened society’s mood. Some turned to new gods: Communism (at a terrible cost in lives and human dignity) and hedonism (the sexual revolution, with the inevitably ensuing breakdown of the family).

C.S. Lewis (Chronicles of Narnia) and J.R. Tolkien (Lord of the Rings trilogy) went against this tide, celebrating courage, brotherhood, honor, and especially faith. Their faith was intact: the horrors of the century had shown, not that God had failed, but that we live in a fallen world, a world dominated by God’s enemy, by the devil. This world is one of constant struggle between Light and Shadow.

Hope of Christianity is not the fulfillment of our own natural aspirations for happiness, but hope in triumphant future only God can provide. Consider Alma: remember: put trust in God, ye shall be delivered out of trials, troubles, afflictions… AND YE SHALL BE LIFTED UP AT LAST DAY. – triumph is at last day. The promise is not of ease and fulfillment in this world.

You too live in world of ultimate conflict between good and evil. You too must decide what part you will play. The Gospel does not offer you the vague, undemanding spirituality or the non-judgmental God preferred by the millennial generation.

William Law: if you have not chosen Kingdom of God first, it will make no difference what you have chosen – whether immersion in social media, or wealth, or sports, or devotion to social causes: all these are distractions from commitment to the Kingdom of God.

SUM: there is a story line to world’s history, an epic tale, a true King, and a wicked pretender (who rules by blood and horror). True followers will see through lies and deception, build allegiance to true king, prepare a people for King’s return, and his reward.

December 6, 2015 Fragmentation of social and familial bonds
Recent Comments
0 | Leave a Comment
Browse Our Archives
get the latest from
Latter-day Saint
Sign up for our newsletter
Related posts from The Soul and the City