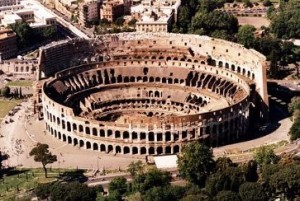 [Along with a bunch of friends – linked below – I am reviewing LDS General Conferences beginning with the first available at lds.org, April 1971.  Here are a few thoughts relating the April, 1971, Saturday Afternoon session.]

N. Eldon Tanner, 2nd Counselor in the First Presidency, proposes to say just what he would say if this were his last message to us. And his choice is to concentrate our minds on the choice that determines our existence: “choose you this day whom ye will serve” (Josh. 24;15). We cannot serve two masters, and the alternative to God is mammon. Pres. Tanner is worried that we would-be saints show “undue concern for material possessions, for shrines and monuments, which crumble and decay.” He also warns against our becoming “wicked and adulterous people.” “I fear,” he says, “that this is happening rapidly in our own land.”

Our inclinations to adultery and to materialism are abetted by our pride, including our pride in “progress.”

(Bro. Vandenburg echoes this critique of progress in the very next speech: “it seems that man knows no bounds to the physical conveniences he can produce. We boast how our knowledge is expanding as new discoveries are made which open up the materialistic world. Yet progress in solving the problem of how to live with our brethren seems so slow in comparison.”)

Pres. Tanner seems as much concerned with the character and fate of our nation and civilization as with individual souls (which makes sense, since souls are at greater risk in a corrupt society). He supports his warnings with Rudyard Kipling’s solemn poetry (“Judge of nations, spare us yet,/ Lest we forget, lest we forget”) and with Arnold Toynbee’s interpretation of the decline of civilizations, including our own. Toynbee “suggests what we should do to be saved, politically, economically, and religiously, and states: “Of the three tasks, the religious one is, of course, in the long run by far the most important.”

This declinist rhetoric no doubt will appear dated and hard to credit to many who are confident of our continuing progress, socially and morally even more than technologically. In particular, the idea that a strong religious foundation is necessary to the health of a civilization no doubt seems hopelessly quaint. Pres. Tanner’s dire warnings may seem particularly irrelevant or self-refuting to those who were not born when this speech was given.

Of course John Adams, George Washington, and effectively all the American Founders agreed on the essential role of religion in a healthy society. (Adams, you will recall, stated emphatically the constitutional order presupposed a religious people. And see Washington’s Farewell Address.) But of course these sages were writing about two hundred years before progress really began progressing big-time. One could cite the clear message of the Book of Mormon regarding the link between prideful disbelief and social dissolution – but that would be to mix religion and politics, wouldn’t it?

But doesn’t the simple fact that Pres. Tanner’s warnings were declared 44 years ago undermine their credibility, since, obviously, there was nothing to worry about – we’re doing fine, aren’t we, after all? I mean, fifteen years earlier the pillars of society were warning that Elvis Presley’s antics were a sign of corruption.

My responses to these dismissals:

1) The fact that Elvis Presley seems tame and inoffensive to us now, in comparison with, say, rapist rap and Miley Cyrus, seems rather to vindicate the old warnings about the decline of popular culture, not to refute them. So our deafness to Pres. Tanner’s warnings of 1971 are hardly a proof that they don’t apply to us.

2) 44 years is really not such a long time. It’s not hard to conceive that we’re still living within the very decline that President Tanner discerned.

Consider, in this connection, the heightened relevance for us of this warning by Elder Hinckley later in this session:

Here is one of the tragic reasons for mounting juvenile delinquency: literally millions of children who come from homes where there is no parental love and consequently very little child security. Here is a root cause of our soaring public welfare burden, which is devouring billions of our treasure. Here is a denial of the kind of family ordained of God from the beginning. Here is heartbreak and failure.

December 24, 2015 Inside Dope on Emerging Mormon Pro-Homosexuality Stance
Recent Comments
0 | Leave a Comment
"It's unclear why you're referring to this opinion piece -- to point out how right ..."
CDorsey Vulgar Elitism & Empty Populism
""Cut off from sobering reality, idealism is exciting. It is also destructive, and finally murderous." ..."
Andrew Marchant-Shapiro 200 Years of Karl Marx
"I don't know why we feel the need to keep beating this dead equine, especially ..."
Bravo Sierra 200 Years of Karl Marx
"And yet the United Order seemed like a revelation?"
Morm on 200 Years of Karl Marx
Browse Our Archives
get the latest from
Latter-day Saint
Sign up for our newsletter
Related posts from The Soul and the City