Grace Merged with Works: Mormonism in Theory and Practice 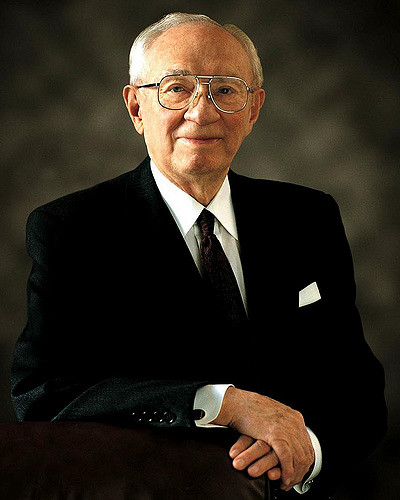 The massive repudiation of the debased Donald Trump by Utah Republicans last week has provoked a fair amount of respectful reflection among conservative intellectuals on the Mormon difference. It tends to take something like this form: “You’ve got to hand it to those Mormons, they foster real healthy communities with good morals and good manners. Of course, their theology is wacko, but still…” But does it make sense to describe a theology as wacko that grounds a wholesome, sober, moderate and upright practical existence – and that seems to produce immunity to the vulgar demagoguery to which millions of self-described “evangelical” Christians – along with many others, of course — have succumbed? To put the question more generally: are theology and action, theory and practice so separate that the tendency and very meaning of one can be discerned without reference to the other? Or must it not be the case, in some sense, that theology is as theology does – that is, that the very meaning of ultimate beliefs about the big picture are to be discerned in the practical, concrete and living manifestations of these beliefs? And one can turn the question around: can the practical meaning of a religion, the lived significance of its daily practices, be discerned without reference to the big picture within whose horizon these practices are undertaken?

The holistic character of the Restored Gospel, with its seamless linkage between heaven and earth, theology and daily practice, is on full display in this April 1972 session of LDS General Conference.

Elder Gordon B. Hinckley, in “What Will the Church Do for You, a Man?” enumerates six benefits of the Restored Gospel that run the gamut from the mundane to the eternal.

First, it will bring you into the greatest fraternity in the world. … Second, active membership in the Church will motivate a man to clean up his life, if that is necessary. … Third, activity in the Church will afford you growth through responsibility. … Fourth, membership in the Church and active participation therein will give a new dimension to your life, a spiritual dimension that will become as a rock of faith, with an endowment of authority to speak in the name of God. … Fifth, it will assist you in the governance of your home…. Finally, the Church makes it possible for you, a man, to bind to you for eternity those you love most.

In fact, on close inspection, no dichotomy between the mundane and eternal is at work in Elder Hinckley’s counsel; rather, there is a seamless continuity between daily, terrestrial struggles and eternal, celestial promises. The “spiritual dimension that will become as a rock of faith” is not a matter of abstract transcendence but a comfort and a guide in the real challenges of mortal life: “Blessed is the man who prays with the assurance that prayers are heard and answered. Blessed is the man whose companion is the Holy Spirit. Blessed is the man who possesses the authority to speak in the name of God.” (See my observations last week on dialogic prayer.) Divine guidance is thoroughly relevant to quotidian efforts because the central focus of these efforts, the family, has eternal significance; and every man can speak in the name of God because every man (as every woman) is involved daily in work of eternal significance, however modest and ordinary it may appear:

How much stronger the nation would be—any nation—if there were presiding in each home a man who looked upon his wife as an eternal companion, engaged with him in a partnership with God in bringing to pass divine, eternal purposes, and who looked upon his children as children of our Heavenly Father, who has given to earthly parents a stewardship for those children.

“To think of eternal life without eternal love is to construct a paradox, a contradiction,” and Mormons have no interest in a definition of love that utterly “transcends” the real, concrete affections that define their mortal existence.

The Mormon conception of and, indeed, practical acquaintance with the continuity between heaven and earth reconfigures the great question of faith and works, or grace and nature, that has riven creedal Christianity, as can be seen in Theodore M. Burton’s “Salvation and Exaltation.” Elder Burton takes aim, as Mormons are wont to do, at the evangelical Protestant understanding of salvation by grace as a once-and-for-all event.

I wonder how many people have been lulled into a false sense of security by such teaching. As a missionary knocking at the doors of people, I had literally hundreds of people tell me that they were not interested in learning more about Jesus Christ, for they were already saved. The shocking thing about this is that they were right. What that minister said was true, but the difficulty is that it was not the whole truth.

It is true, Elder Burton explains, that Christ’s grace or sacrifice has saved us – in fact, all of humanity – from death. But our full salvation, or “exaltation,” requires a “personal atonement or reconciliation” that depends upon the grace of Christ’s atonement but is a “conditional salvation” not automatically accomplished in the event of grace.

Exaltation comes as a gift from God, dependent upon my obedience to God’s law. No works I do solely of my own power can bring this to pass. Only by the grace of God has this course been opened to me, but only through obedience to the laws of God can I claim my inheritance in the celestial kingdom of my Heavenly Father as a son within his family. I cannot be exalted in my sins, but must work until I overcome them.

Thus the Book of Mormon teaches, very differently from the Lutheran simul justus et peccator (at once justified and a sinner) that we must be saved from our sins, and that we cannot be saved in our sins. This is possible for Mormons because, unlike Luther, we do not reject all earthly loves as contradictory to the commandment to love God with all our might, mind and strength.[i] Elder Burton goes on to conceive of exaltation as the fulfillment of our deepest (dare I say “natural”) longings: A cousin had asked him: “If you had your heart’s desire and could take it with you out of this world, what would you take?” The answer for Elder Burton was obvious: “My family and loved ones!”

“That possibility of an eternal family relationship,” he goes on to affirm, “is what is meant by exaltation and eternal life. … This full salvation is obtained only in and through the family unit preserved throughout eternity.” Apart from “this goal of eternal family exaltation, our lives on this earth will be utterly wasted when Christ shall come the second time.”

This eternal horizon, which establishes a deep continuity between heaven and earth, grace and nature, is further emphasized by Elder Joseph Anderson (“Man’s Eternal Horizon”):

Our horizon should extend to an unlimited future beyond death—out beyond those things of a temporal nature. Our horizon of the future should not be confused with the close-up horizon of present conditions.

This is the core of the “wacko” theology that grounds Latter-day Saints in a wholesome, responsible and upright worldly existence (and thus makes them immune, on the whole, to the vulgarity and blind resentments of Donald Trump). Mormon practice is holistic because Mormon theology establishes a clear line of continuity between our hearts’ natural desire for familial love over generations and the highest meaning of salvation by grace in eternity. Mormon prayer is practical, petitionary and dialogic because the challenges of daily life are for Mormons part of an eternal progression. And the Mormon understanding of faith/works or grace/nature overcomes the deadlock of creedal Christianity by understanding “works” as concrete steps towards an eternal reconciliation with God and his children, steps made possible by Christ’s unique sacrifice but that we must make by receiving priesthood ordinances and by living true to the covenants they include.

[i] It is worth noting in this connection that Elder Burton’s discussion of grace is perfectly consonant with Pres. Uchtdorf’s recent and powerful General Conference address on “The Gift of Grace.” This great speech was taken by some to be a kind of breakthrough against a traditional and popular LDS emphasis on “works.” But Pres. Uchtdorf in no way diminishes the role of our own obedient efforts in embracing “what the scriptures often call the grace of God—the divine assistance and endowment of strength by which we grow from the flawed and limited beings we are now into exalted beings of ‘truth and light, until [we are] glorified in truth and [know] all things.’” Very much unlike Luther, again, Uchtdorf notes that God “wants His sons and daughters to become like Him.” In this perspective “genuine love and gratitude will miraculously merge our works with God’s grace.” The merging of works with grace — this is very powerfully said, and it perfectly supports what was being said in General Conference 44 years ago. And this merging has always been bound up with an eternal horizon that merges our highest natural longings with our idea of divinity.

May 2, 2016 Revelation and Character (Friday Morning Solemn Assembly, October 1972)
Recent Comments
0 | Leave a Comment
""Cut off from sobering reality, idealism is exciting. It is also destructive, and finally murderous." ..."
Andrew Marchant-Shapiro 200 Years of Karl Marx
"I don't know why we feel the need to keep beating this dead equine, especially ..."
Bravo Sierra 200 Years of Karl Marx
"And yet the United Order seemed like a revelation?"
Morm on 200 Years of Karl Marx
"I saw the film in Germany yesterday evening with locals - actually people who look ..."
Tim Clark The Darkest Hour: Review
Browse Our Archives
get the latest from
Latter-day Saint
Sign up for our newsletter
Related posts from The Soul and the City