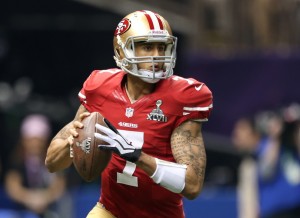 San Francisco 49ers quarterback Colin Kaepernick said his reason for refusing to stand for the national anthem was that he wanted to “start a conversation.” This is a well-worn rhetorical ploy; Democrats have been playing the “conversation about race” card at least since Bill Clinton’s presidency. But the conversation turns out to be a lecture on how liberals are right and everyone else is not only wrong but racist…

Our quarterback-activist is clearly convinced, beyond any need for further conversation, that the problem is “oppression,” that is, systematic oppression of blacks by whites. The obvious evidence of this, for him, are certain infamous cases of police shootings of black victims. Needless to say, he does not mean to invite any “conversation” on possible explanations of police behavior in any of these cases or more generally on the greater probability of young black men being stopped by police than whites; he takes the narrative of invidious racism to be a truth beyond discussion.

He does not ask why even a police officer with zero racial animus, even a black police officer, for that matter, might reasonably be more suspicious of black male youths than of some other demographic category. Such a question would lead to some “conversation” about crime rates in the African-American community, particularly black-on-black crime rates, notably in cities like Chicago, Detroit and Baltimore long ruled almost wholly by Democrats, a real conversation that would not fit neatly within the “oppression” narrative.

A real conversation concerning the plight of African-Americans would set aside the rhetoric of “oppression” to consider the disintegration of the black family as a massive factor in the economic and educational underperformance of blacks. (Kaepernick himself presents an interesting case of “oppression”: born of a white mother, abandoned from the start by a black biological father, he was raised in quite unoppressed circumstances by white adoptive parents.)

One can always try to explain social and moral pathologies as effects of antecedent historical injustice, but it remains that families and individuals, whether black or white, will never do better, will never really improve their lives, unless they take responsibility for themselves. People’s lives cannot become better without people taking responsibility for their own lives, and the blaming of pathologies on “oppression” has become a way of denying this basic truth.

September 21, 2016 What is Love?
Recent Comments
0 | Leave a Comment
"It's unclear why you're referring to this opinion piece -- to point out how right ..."
CDorsey Vulgar Elitism & Empty Populism
""Cut off from sobering reality, idealism is exciting. It is also destructive, and finally murderous." ..."
Andrew Marchant-Shapiro 200 Years of Karl Marx
"I don't know why we feel the need to keep beating this dead equine, especially ..."
Bravo Sierra 200 Years of Karl Marx
"And yet the United Order seemed like a revelation?"
Morm on 200 Years of Karl Marx
Browse Our Archives
get the latest from
Latter-day Saint
Sign up for our newsletter
Related posts from The Soul and the City