Serial Episode 7: In Which I Exhale

Just to get it out of the way:

Yes. I knew. So did, of course, Adnan and his family, and my family and close friends. We’ve known the Innocence Project looked at the case before the podcast started.

Oh how I’ve wanted to spill it over the past six episodes. Especially in the face of comments and threads that increasingly condemned Adnan and those supporting him, I really really wanted to say “Hey. The Innocence Project took it. DO YOU HAVE ANY IDEA WHAT THAT MEANS?”

I’ll start by telling you what it means to us. Many years ago Adnan applied to the Innocence Project of Maryland. They rejected his application due to “lack of DNA evidence in the case.” Three years ago when I moved back to Maryland, I reached out to them again. I emailed, called. Begged for a meeting. Ten minutes, just give me ten minutes I asked. They refused. It was crushing.

So when Sarah told me that Deirdre offered to look at the case, my heart nearly exploded.  The kind of explosion that oozes joy and molten chocolate. It’s no small thing for an institution as respected and prestigious as the Innocence Project to commit their time and resources to a case. They get thousands of applications annually. When they take a case, it not only says something about that case, they’re also putting their name on and tying their reputation to that case.

A quick look at a fact sheet found on the Innocence Project’s website shows how vital their work is.  Since 1989 there have been 321 DNA-related exonerations in the U.S. This doesn’t account for the hundreds, if not thousands, who are innocent but languish in prisons because they’ve been unable to get attention to their case, there is no DNA to test, or there is no legal recourse left. It also doesn’t take into account the innocent people we’ve actually executed in this country.

One of the major reasons cited for wrongful convictions is the informant – 18% of all wrongful convictions that are overturned are convictions based on a witness/informant who was offered some sweet incentives in return for their testimony. Incentives like money, release from prison, immunity from prosecution, or reduced/vacated sentences. Sound familiar? It should.

Let’s get something straight. The Innocence Project does not fight cases only based on weak convictions. It fights cases of people they actually think are innocent. I was struck by Deirdre’s comment that its rare and meaningful for those convicted to maintain their innocence throughout.

The day of the conviction is still fresh in my memory, like it happened just the other week.  The jury had retired for deliberations, and we left to get lunch in downtown Baltimore. It was a Friday. I assumed that we wouldn’t hear a decision until after the weekend at the soonest. I hadn’t even settled in to eat when I got the call to come back to the courthouse. They reached their verdict with lightening speed. It could only be good news. There was no way, no freaking way, they could deliberate on a murder case and reach a guilty verdict in less than two hours.  It had to be an acquittal.

But it wasn’t. We sat in shock as the verdict of guilty on all counts was read. Something odd and preternatural happened as the verdict was read, but I’ll blog about that later. I remember clear as day, as we sobbed, Adnan standing to be shackled and him turning to look at his mother and his community and tell us it was ok, he was innocent and Allah knew he was innocent.

He was led out looking like a bewildered child, eyes wide, skinny, facial hair still struggling to come in. He has already spent nearly a year in prison.  It may have been the first time any of us realized he may spend the rest of his life there.

Adnan was sentenced to life plus thirty years, with no possibility of par0le. At 17, and with no prior record, he was tried as an adult and given the maximum sentence.

Judge Wanda Heard said something terrible to him as she sentenced him to spend his youth, his adulthood, and his old age inside the confines of a prison cell.  Judge Heard, who had never in her life held a conversation with Adnan or the people who loved him, mentioned his popularity and and intelligence and said, “you used that to manipulate people. Even today, I think you continue to manipulate even those who love you.”

I’ll never forget, or forgive, that twist of the knife.

The wind is fickle and so are people. In the past few weeks the tenor of conversations shifted so significantly against Adnan, it was demoralizing. I wanted to stop reading the Reddit threads positing the many reasons and ways Adnan killed Hae, but I was a spectator surrounded by accidents. I couldn’t look away. Every so often a timid soul would emerge via private message and reassure me that they believed Adnan was innocent, and they believed me when I said no one pressured Asia into writing those documents.

Of course I also had to mentally regroup after every 300 or so comments and remind myself:

1) THE INNOCENCE PROJECT IS ON IT, HEE HAW!

2) These folks have not seen the trial transcripts, the police files, the attorney records, the forensics, the court documents, etc etc. They don’t even know what they don’t know. Unknown unknowns a la Rumsfeld as it were.

Then I’d take a deep breath and try to be entertained by the various theories and analyses. The winner-winner-chicken-dinner prize went to the person who theorized that Adnan purposefully kept Asia out of the trial, even though she was a sound alibi, to save her for a second shot in case he lost the trial without her.  Let me say that another way. Adnan hid away an alibi witness strategically so that he could use her in a post-conviction appeal over a decade later.

I don’t know if that theory can be topped but “Thousandshipz” from Reddit apparently was feeling the same way I’ve been, posting this brilliant thread on “Top Ten Signs Your Theory is Wrong”:

After episode seven dropped, things have changed. The timid have become bold. Once again flags are waving for Adnan. This feels good for now, though I know at any time the winds can again shift and overboard we all may go.

As pleased and relieved as I was with Sarah deciding to reveal the role of the Innocence Project (I actually thought she may do it towards the end of the podcast), it seems some are disappointed.  I saw random comments here and there about people finding this episode boring, or filler, or not meaty and juicy like the others. It plucked at me a bit to read that but I felt full on rage listening to Slate’s podcast about the podcast tonight. Let’s start with Katie’s rage though.

Katie from Slate was “enraged” after episode seven. Enraged because this episode was a “side-car” to the show. Katie wanted to go back to the nitty-gritty – the messy, sloppy, fuzzy details that made no sense and have Sarah sort it out for her. Amanda took it further, noting that this was not just a side-street-car-thingy but that Sarah was taking it “off a cliff”. She’s really upset that Sarah brought on a “tree-hugger” who thinks everyone is innocent, because dammit it’s just not objective of Sarah to do that.

So Amanda reduces Deirdre, a woman with an impressive 26 years of experience in criminal defense, and a brilliant director of a prestigious program with a track record of exonerating innocent men, to a hippy with an agenda. Sarah is reduced to an “enamored” slobbering puppy dog at Deirdre’s feet and loses all credibility for literally just playing the straight interviews of Deirdre and her team* (how much LESS contrived could that possibly be I wonder?). David agrees that its important to understand where Deirdre is coming from (code for agenda), and somehow misses the relevance of Justin Wolf completely (what the what?). And Katie is pissed off that Sarah distracted her from the fun stuff for thirty whole minutes and feels a chill down her spine at the prospect of the story having no neat conclusion.

Basically everyone is really disturbed that their precious time was wasted with the irrelevant detail of THE INNOCENCE PROJECT TAKING THE CASE. I hate to break it to the folks at Slate** and elsewhere: this is not about you and your entertainment. The show is a vehicle to tell a story about real people. Real lives that have been devastated. Real opportunity for redemption if the Innocence Project comes through.

So while those of us who have waited 15 years for such a break, calling it an irrelevant side show is both offensive and distasteful. To the people at this and other Innocence Project chapters, it’s disrespectful of their dedication and work. To Adnan and his family, who have lived in this messy, fuzzy, sloppy inconclusive nightmare for half his life, it’s the height of narcissism for a spectator to be concerned about her own need for resolution.

Sarah and the Serial team have done a remarkable job in presenting a complex story, that no one paid attention to for years, in a compelling and entertaining way. It’s ok to be entertained. But there is no excuse to forget that the stakes here are much higher than our entertainment.

*Hey smart ladies, can we please stop infantilizing other smart ladies? Can we give credit to the careers, reputations, and integrity of people like Deirdre and Sarah? It sucks much worse when other women do it.

**I still love you for featuring my blog as a must-read companion to the podcast. I swear I do.

Muslim
Let's Give Them Something To Talk About
Split the Moon 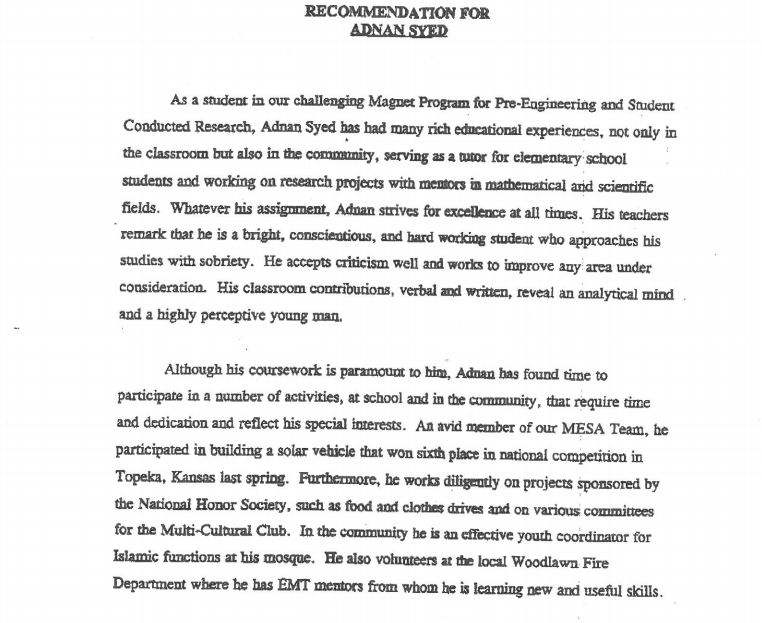