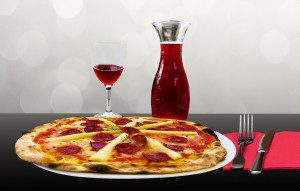 Some of you have probably seen the same headlines I have about the Pope treating the homeless to pizza. Scrolling past the large number of gratuitous Pope photos on the Independent (apparently some of them are links for other Pope stories), one quickly learns that – while this venture is done on papal authority and does include papal pizzeria visits – the protagonist of the story is actually Konrad Krajewski, the Papal Almoner. (If the title is unfamiliar, you might think of that office as the Pope’s personal point man and organizer for works of social justice.)

While Arch. Krajewski is acting under papal direction and on Pope Francis’ behalf, he deserves full credit for his hard work and simple compassion. More important than credit is the realization that in this matter, neither Pope Francis nor Konrad Krajewski is some rogue media hero operating independently of others. Such a picture may capture the imagination, but the reality is simpler. In works of social justice, the Pope is a pastor; he organizes and encourages and does not simply act on his own. And if the Pope is working with others to meet the needs of the neglected near his home, then this is less a matter for media praise (however merited), than a concrete role model. We need to look for where we can do the same in our communities. A good beginning is to ask which of our neighbors we don’t usually consider to be part of our community, or whom it is we see as nuisances more easily than as human beings.

What most grabbed my attention wasn’t the headlines though, it was this paragraph from La Stampa:

“We always conclude the trip in a pizzeria,” says Krajewski, “as do many people who are on vacation at this time. We certainly are not saving the world with some of these initiatives, we are not solving the problems of the homeless in Rome, but at least we are restoring to them a little dignity. I was very impressed to see how they behave in these situations. They know how to get along together, and when we are at the table, if one is talking and telling a story, everyone else is listening quietly. Even some of them, who are usually more agitated, cheer up.”

“We are not solving the problems of the homeless in Rome.” Those are the words that stood out to me. It seems every time someone in the US wants to talk about social justice, or poverty, or the disadvantaged – there is always the question of are we getting this right? Is this the best fix? At least, when the discourse doesn’t completely deteriorate into vilification and attempts to blame someone or other for all that is wrong in the world.

But Krajewski has his eyes where they need to be- on his own plate, his own work. He knows that today or tomorrow, neither he nor anyone else is likely to solve the many problems of poverty and homelessness. But he places his hand to the plow and does not look back. 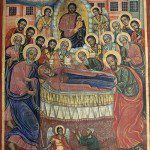 August 15, 2016
Why Is There An Angel Chopping a Man's Hands Off On The Dormition Icon?
Next Post 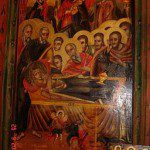 August 15, 2016 And Now, a Serious Meditation on the Dormition...
Recent Comments
0 | Leave a Comment
"Is her name really Caren? LOL!This pandemic has given a lot of people a whole ..."
Pennybird To All Who Grow And Bake ..."
"Thanks for the summary.BTW, if being pro-life is your goal, the anti-Roe stance isn't helpful. ..."
Bob Seidensticker The Jig Is Up: A Review ..."
""The woman who was known for lying to get her way sounded very sincere when ..."
Mary The Jig Is Up: A Review ..."
"A person has control on their level or negligence, to their level of a formed ..."
Chris Royce COVID, Sunday Mass, and Sins of ..."
Browse Our Archives
Follow Us!